Will Morsi Offer Change for Gaza?

The Rafah border crossing was closed Aug. 5 after an attack on an Egyptian security site in the Sinai peninsula. Gazaans were upset over the temporary closure since they had pinned high hopes on the regime change in Egypt. Sophie Claudet and Saleh Jadallah write for Al-Monitor. 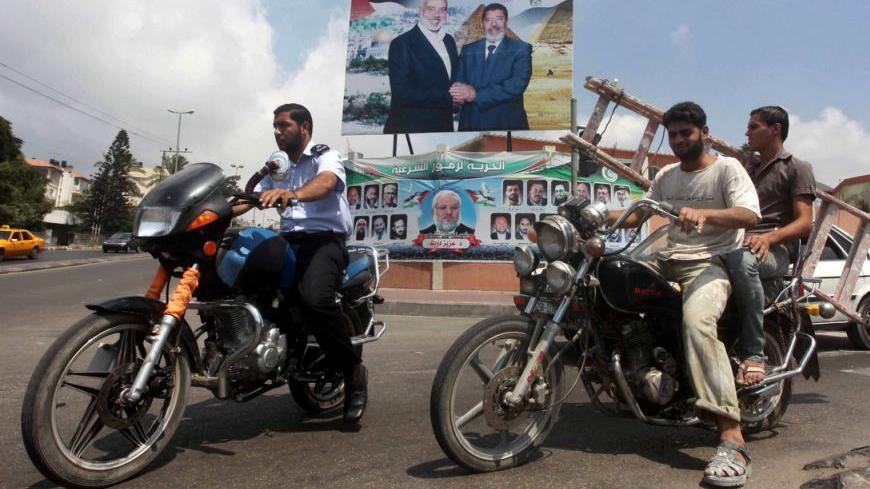 GAZA CITY – When Egypt reopened the Rafah crossing border with Gaza late last month, Palestinians hailed the move as a possible end to their isolation from the rest of the world after years of near-total closure enforced by both Israel and former Egyptian President Hosni Mubarak.

"Hamas appreciates the Egyptian decision to completely reopen the Rafah crossing, and considers this step as an evidence for the good intention of the Egyptian leadership toward the Palestinian people, especially in Gaza,” Hamas spokesman Sami Abu Zohri said.

The Gaza Strip has four main crossings: three of them are controlled by Israel and the Rafah border is under Hamas and Egyptian control since Israel pulled out its settlers and army from Gaza in 2005. Israel-controlled Erez crossing is mainly used by businessmen, medical patients, foreigners and Palestinian officials — all requiring permits that Israel delivers sparingly. The other two passages, Karni and Karem Shalom, are used for commercial purposes and unilaterally controlled by Israel. And Gaza can only trade — albeit with great difficulties — by way of land since both its seaport and airport were destroyed by Israel during the second Intifada (2000-2005).

But the Rafah border crossing, which is the only window to the world for the great majority of Gazaans, was closed on Aug. 5 after an attack on an Egyptian security site in the Sinai peninsula left 16 Egyptian soldiers dead, creating tensions between the two sides.

Following the attack, Egypt accused Palestinian militants of being involved in the attack, claiming that the gunmen came in through tunnels dug between Gaza and Sinai used to smuggle goods, fuel and construction materials. The incident resulted in the temporary closing of Rafah.

Gazaans were all the more upset over the temporary closure since they had pinned high hopes on the regime change in Egypt following Mubarak’s ouster — on top of which was the reopening of the Rafah border crossing after years of blockade.

The sweeping victory of Hamas in the January 2006 Palestinian general elections and the ensuing 2007 coup the hardline Islamist movement staged in the Gaza Strip were met with a near total blockade by Israel that was also heeded by Egypt.

Years of closure have not only prevented freedom of movement and free trade but also contributed to skyrocketing poverty and unemployment levels in the narrow Strip. In a report published last week, the UN said 40 percent of the population lived in poverty, 80 percent of whom depend on outside aid, and that close to a third of Gazaans were jobless.  Some 1.6 million Gazaans are crammed into 146 square miles, making the Gaza Strip one of the most populated places in the world. And the UN estimates that the population will rise by half a million in the next coming eight years, meaning that is urgent to find employment opportunities for the Strip’s every increasing youth. In fact, the international organization said that as things stand Gaza won’t be “livable” by 2020. No later than last week, an 18-year old Gazaan set himself on fire in a desperate attempt to protest his family’s dire economic conditions. He died from his wounds on Monday, September 3.

But so far, Israel has resisted international pressure to lift its blockade, which it says prevents weapons from reaching Hamas.

In the primary stages of the 2007 blockade, the ousted Egyptian regime also restricted movement. The old Egyptian regime used to open the passage three days every two months. And Egypt caused an uproar in the Arab and Muslim world when it sealed its border with the Palestinian territory during Israel’s Cast Lead Operation, a move perceived as giving a free hand to the Jewish state to wage an all-out war on Gaza. Hosni Mubarak eventually eased the movement of Palestinian passengers after Israel intercepted the Gaza-bound Turkish flotilla in 2010.

After Mubarak was toppled by a popular uprising in 2011, Palestinians were happy to see him go as he was perceived to be serving Israel’s interests. When Mohammed Morsi was elected president of Egypt in June, thousands of Gazaans flooded the streets to express their joy holding pictures of Morsi to celebrate the Islamist Party’s victory: Hamas is very close in its ideology to the Egyptian Muslim Brotherhood.

In July, Hamas Prime Minister Ismail Hanyieh traveled to Cairo to meet with Morsi. A meeting during which the new Egyptian president promised to help improve the lives of Palestinians in Gaza by facilitating their travel and supplying the strip with fuel and power.

But so far, little has changed.

Abed Ghani Abu Salama, a Palestinian teacher at a secondary school, said that reopening the crossing was a good step. However, he said he was hoping that the new Islamist leadership in Egypt would completely lift the blockade on Gaza.

"The tyrant was brought down and now Egypt is experiencing a new era of democracy. We hope Morsi will turn that black page and open a new page for better relations ," Abu Salama told Al-Monitor. "After years of suffering, Gaza residents need to be rewarded not punished.”

Others in Gaza said they were optimistic about the impact of the Muslim Brotherhood’s election. Abed Rahman al-Khaldi, a university student who supports Hamas, said it was still early to judge the Islamist leaders in Egypt but that he was counting on their religious solidarity.

His friend Abed Rahman, also a Hamas supporter, said: "I do trust Brotherhood leaders but they need a chance until they become stronger. If they have enough power, they will not only open the crossing but will liberate Palestine."

Abu Al-Waleed, a shop owner, said that after initially worrying about the Egyptian president not holding enough power in the face of the Supreme Council of the Armed Forces (SCAF), he now believes the president had no excuse to continue the same policies towards Gaza.

"If President Morsi ends up adopting Mubarak's policy toward Gaza, he will be responsible for isolating Gaza from the outside world and for creating humanitarian crisis for all Gaza residents. Now he has enough power to end the suffering of Gaza," Abu Al-Waleed said.

Mustafa Ibraheem, a Palestinian human rights activist, urged Egypt to treat Palestinians fairly and not to inflict punishment on them.

Egypt should deal with Gaza as they deal with any other country in the Arab world. Even if someone from Gaza does wrong against Egypt, they do not have the right to impose a collective punishment on a whole people," the activist recently wrote online in a veiled reference the temporary closing of Rafah following the Sinai attack.

A free-trade zone with Egypt?

Palestinians are still waiting for more from Egypt.

According to an official at the Hamas ministry of interior, about 40,000 Palestinians, including medical patients and students have their names registered with the ministry waiting for their turn to travel. Palestinians officials are also hoping to create a free-trade zone between Rafah and Egypt, on the very land under which hundreds of tunnels are used by Palestinians to smuggle in basic commodities — and not only weapons — from Egypt to circumvent the blockade.

Speeding up trade with Egypt is all the more urgent that Morsi ordered the destruction of more than 100 tunnels following the Aug. 5 Sinai attack. A local Palestinian news agency reported last week that the land authority in Gaza had already started leveling land to prepare the ground for a duty-free zone, west of the Rafah crossing. But the Hamas government may be getting ahead of itself. Although the economy ministry sent a plan for a duty-free area to Egypt’s authorities, it has yet to receive an answer from Cairo.

“Establishing a duty-free zone will play an important role in lifting the blockade on Gaza and will strengthen the political unity with Egypt as well as with the Arab and Muslim world,” said Alaa Al-Rafati, the economy minister. “A special delegation from the ministry will travel to Egypt to discuss the proposition of this zone,” Rafati added.

Separately, Hanyieh urged Egypt on Tuesday (Sept. 4) to let much-needed Qatari fuel enter the Gaza Strip. “I call on the Egyptian president Mohammed Morsi to give orders to the concerned authorities in his government to ease the process of sending the shipment of Qatari fuel and to accelerate the procedures for establishing the duty-free zone,” said the Hamas prime minister as he was presiding over the first cabinet meeting of his reshuffled government.

To date, Egypt has not sent the required amounts of Qatari fuel to run Gaza’s only power plant, which only resumed operations in July after six years of inactivity because of the Israeli-Egyptian siege. Besides its own power plant, Gaza relies and Israel and Egypt for its electricity and had, until July, experienced power cuts of up to 18 hours a day. Hamas is also hoping to seal an agreement with Cairo to link its electricity grid to Egypt’s.

Saleh Jadallah is a Palestinian print and photo freelancer in Gaza.