With its headquarters in Qatar, Hamas will have to accept the spirit and direction of its new patron, Emir Hamed Bin Khalifa Al Thani, writes Shlomi Eldar. 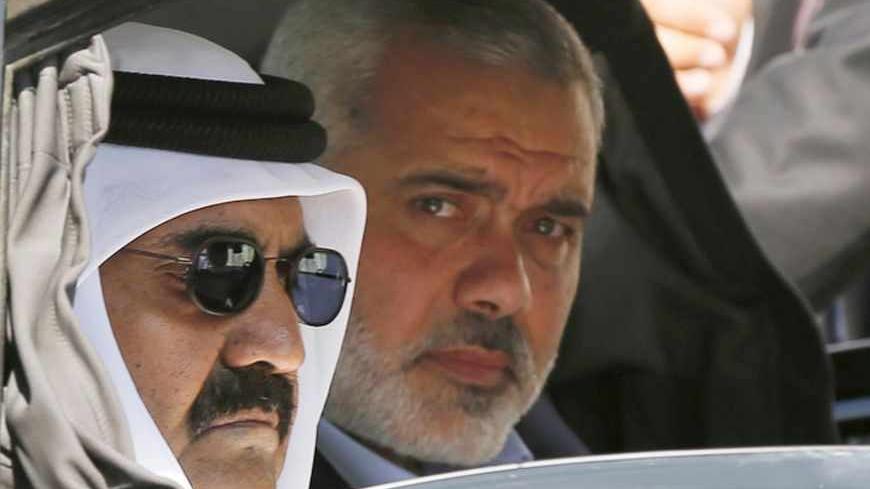 The shockwaves reverberating through Ramallah reached a climax on Saturday (April 13, 2013) with the resignation of Palestinian Prime Minister Salam Fayyad. It is against this background that Hamas’s political bureau will meet late this week in Qatar. It will be the political bureau’s first meeting since the recent elections. Hamas Prime Minister Ismail Haniyeh will now be serving as deputy to Khaled Meshaal, who won his fourth bid to head Hamas. Haniyeh will be leaving Gaza through the Rafah crossing on Thursday (April 18) so that he can participate in this meeting, in which significant decisions about continued activities and the very future of the movement are expected to be made.

The main topics to be discussed during that meeting are reconciliation with Fatah, the temperamental relationship with Egypt and the Muslim Brotherhood now that President Mohammed Morsi is in power, and ways to convince the international community to recognize Hamas as a legitimate movement in power, six years after it won the elections in the Palestinian Authority. There is, however, another question that will hover above all of these: How will Hamas act toward Israel and the West in the coming years.

There can be no doubt that Hamas has come a long way since it was first founded. It has transformed itself from a revolutionary movement opposing the PLO, with terrorism as an intrinsic component of its identity, into an integral part of the Palestinian establishment. It has become a movement that wishes to adapt to the very same political order against which it once waged a war of destruction.

As early as 1999, Professors Shaul Mishal and Avraham Sela offered a pitch-perfect definition of the movement’s underlying nature (in their book The Palestinian Hamas, Columbia University Press, 2006), long before anyone ever believed that it would one day come to power:

“Given the hostile environment in which Hamas operates — military confrontation with Israel, political competition with the PLO, and, more recently, shaky coexistence with the Palestinian Authority — the question is not how closely Hamas adheres to its official dogma, but how and to what extent Hamas is able to justify political conduct that sometimes deviates from its declared doctrine without running the risk of discontent or internal disputes among its followers.”

Another variable should be added to this time-tested thesis: Where — on what part of the globe — is Hamas forced to take her decisions?

The political bureau is now meeting in Qatar, its new home after its hurried flight from Syria’s warm embrace. It will be interesting to see how Doha influences the way decisions are made and the political course is outlined. How different will the new political course be from the one that was outlined in Damascus?

The movement’s leadership is gathering in the wealthy Emirate, one year after it left Damascus, shut down its offices, turned its back on Syrian President Bashar al-Assad, and set off on a new course. As I wrote in an earlier article on this website, during all those years it spent in Damascus, it was incumbent upon Hamas to adopt the spirit imbued in it by Commander Assad (it began with Papa Hafez, and continued under his son Bashar), and to act according to Assad’s dictates. The most important of these was participation in what is called in Israel, “the Axis of Evil” — Tehran, Damascus, Hezbollah. Hamas was supposed to offer that troika its unreserved support. In this spirit, it was to be unequivocal in its opposition to the West, and especially to the United States.

Now, however, with its new home in Qatar, the political bureau will have to accept the spirit of a new commander and patron, Hamed Bin Khalifa Al Thani, and to act accordingly. The proper way of acting under Assad’s tutelage and the influence that Iran currently wields are not necessarily appropriate when dealing with a wealthy emir from the Gulf, who encourages another type of alliance: one that is more open to the West.

And in fact, Hamed Bin Khalifa has a decidedly pro-Western orientation. His wife Mozah is a fashion icon, not only in the Arab world but in the Western world too. The emir and his children and the members of his cabinet were all educated in the finest schools in Europe. In other words, the emir, his immediate family, and the extended royal family that surrounds him, may call the Persian Gulf their home, but their minds are in the West. Their goal is to do business with the West, and the emir will not deign to indulge anyone who interferes with that. It is also worth remembering that the emir has almost direct access to the heads of the American administration, who regard that tiny but influential emirate as a kind of ally.

As such, the meeting place could well determine the message. While it is safe to assume that Hamas and its political bureau are not as open to Western culture as their hosts, there is one thing that they certainly do know. They know what is good for the emir and good for his country. They are also most likely aware of what the emir does not consider good.

Given all of the above, there are a few questions that should be asked when considering “the Hamas of the future.”

1. Now that it is situated in Qatar, can the political bureau, in conjunction with Hamas in Gaza, issue a call to “set the region on fire” and order its Izz ad-Din al-Qassam Brigades (the movement’s military wing) to launch a Third Intifada?

2. Is Hamas able to decide to resume its suicide attacks against Israeli population centers?

3. Is there any risk that Hamas will equip and fund armed militants in the Sinai, who could place the already tepid relationship between Hamas, President Morsi, and the Muslim Brotherhood at risk?

4. Is Hamas capable of making a decision to renew its close relationship with Iran and take funding from it?

The answer to all of these questions seems to be no. Borrowing an axiom coined by Professors Shaul Mishal and Avraham Sela 14 years ago, it is much more likely that Hamas will decide to become “a tiger in a sheep’s body.” In other words, it will think ahead, integrate into the region, and above all else, exhibit enough creativity to allow it to concoct justifications for a slew of new processes and behaviors, which are not in concord with the movement’s basic principles.

One very serious hint that this will be the new direction that the movement takes is the news that Mahmoud al-Zahar was deposed from the Hamas leadership. That’s the way it is when you are in power, and you have to take steps to improve living conditions for your citizens. That’s the way it is when you are subject to the authority of a guardian who funds you, and whose motivation and approach are fundamentally different from those of Iranian President Mahmoud Ahmadinejad and Hezbollah Secretary-General Hassan Nasrallah.

Shlomi Eldar is a contributing writer for Al-Monitor’s Israel Pulse. For the past two decades, he has covered the Palestinian Authority and especially the Gaza Strip for Israel’s Channels 1 and 10, and has reported on the emergence of Hamas. In 2007, he was awarded the Sokolov Prize, Israel’s most important media award, for this work.  He has an M.A. in Middle Eastern Studies from the Hebrew University of Jerusalem and lives in Ness Tsiona.