Hamas and Hezbollah leaders find themselves on opposite sides of the war in Syria, writes Shlomi Eldar. 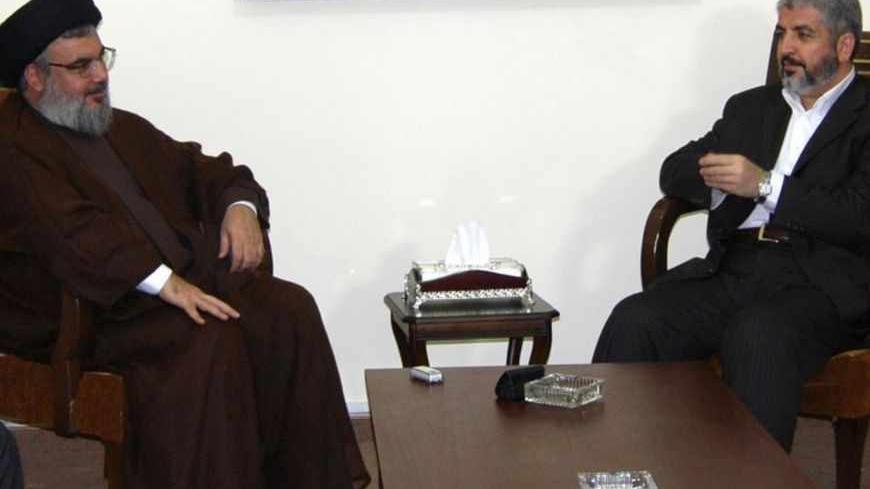 Oh, how the wheel turns!

Just a little more than a year ago, the political bureau of Hamas was situated in Damascus. The organization’s leaders enjoyed the protective patronage of the Syrian regime and aid from their step-brother, Hezbollah. These two organizations were deemed the “darlings” of President Hafez Assad, the father, who left them to his son Bashar as a legacy.

But there is sentiment, and then there is reality. By late December 2011, when the uprising started shifting into high gear, Chairman of the Hamas Political Bureau Khaled Meshaal decided that the time had come to unravel the old alliance with Damascus, and to find some other safe haven for himself, his family, and his senior staffers.

Meshaal is no stranger to the idea of moving homes. Right after the Six Day War, when he was still a boy, his family picked up from the village of Silwad, where he was born (in 1956), right outside of Ramallah, and moved to the Hashemite capital of Amman. Then, to support itself, the Meshaal family was forced to move to Kuwait, only to be expelled in disgrace, along with all the other Palestinians, after the first Gulf War [1990-1991].

Meshaal returned to Amman, where he established Hamas’s political bureau with Moussa Abu Marzouk, the man who served as his deputy up until last week’s elections. But this “Jordanian romance” didn’t last very long, and Meshaal was eventually forced to leave the kingdom. It is worth noting that in the short time he was there, Israel’s Mossad botched an attempt to assassinate him in broad daylight on a major thoroughfare in Amman (1997).

But Meshaal’s real problems began only after King Hussein died. Hussein’s son Abdullah realized that he was dealing with a dangerous organization, which could cause serious damage to the peace agreement that his father had signed with Israel and perhaps even undermine his government, so he showed Hamas the door (November 1999). But Meshaal and the members of his political bureau didn’t have to search long for some other country to accept them. Immediately after they were forced out of Jordan, they were invited to settle in Damascus, where they flourished. Syria under the Assad dynasty provided Hamas with an extensive base of operations during the Second Intifada. It was because of this that the movement was ultimately able to win the elections in the Palestinian Authority and become the most influential factor in the lives of Gaza’s Palestinians.

As we have already noted, Syria and Hamas parted ways just over a year ago. Meshaal sought out another patron and found the Emir of Qatar, Hamad bin Khalifa al Thani, while his “brother” of yore, Hezbollah Secretary-General Hassan Nasrallah, remained loyal to his Syrian patron. So much so, in fact, that Hezbollah’s militias even joined the battle against the rebels, trying to topple Bashar’s government. Actually, Nasrallah, who is a hardened and practical politician in his own right, found that he had no other choice. As long as he remains tethered to Iran by some Gordian knot, he is forced to continue serving his master, Iranian President Mahmoud Ahmadinejad, and, by extension, Bashar Assad.

Meshaal had many more options to choose from. Hamas was never dependent solely on Iran. Rather, it was shoved into Iran’s warm embrace through no choice of its own, during the Israeli siege. Meshaal was therefore willing to sever those ties as soon as an opportunity afforded itself (although he did leave a small bridge intact. You can never tell what tomorrow will bring in the Middle East). By the way, Meshaal was acting in accordance with the policy of the movement’s founder Sheik Ahmed Yassin, who said that Hamas must “never put all its eggs in one basket.” Yassin spent his entire life warning against the movement becoming completely dependent on Iranian money, at the expense of economic assistance from Sunni nations like Saudi Arabia, Egypt, Qatar, etc. It was a policy he advocated until the day he was assassinated by Israel (March 2004).

Now that Bashar Assad and Meshaal have parted ways, Hamas has transitioned to a more active role in the fighting in Syria. According to a report in the London Times, which cited reliable Western sources, members of Hamas’s Izz ad-Din al-Qassam Brigades have joined the fighting in Damascus alongside the rebels, and are even training them for the final assault on the Syrian capital.

Actually, one way of looking at this is as some kind of “family feud.” Hassan Nasrallah is fighting shoulder to shoulder with Assad and his Shabiha forces (the violent gangs loyal to him), and members of the Hezbollah militia are setting up roadblocks in Syrian cities, while Meshaal’s people are fighting against the Syrian army and the Hezbollah members who are helping them.

As far as Khaled Meshaal is concerned, the underlying logic is simple. His movement’s new patron and funder, the Qatari Emir Hamad bin Khalifa al Thani, is a vocal opponent of Assad’s regime. He has taken a firm stand at meetings of the Arab League by calling on other Arab leaders to be more proactive in their efforts to depose Assad and has not ruled out military intervention. The battle-scarred Izz ad-Din al-Qassam Brigades could be just the right fit for an intervention of that sort. Then, when Assad falls, and it is bound to happen sooner or later, Meshaal can reap the benefits of having contributed to the downfall of the Syrian regime.

In contrast, the Syrians regard Meshaal as a traitor in every imaginable way. This, for example, is what a Syrian anchorwoman said to the leader of Hamas during a news broadcast in October: “When you wandered about like a miserable vagrant, no other country was willing to accept you and let you set foot on its soil. Syria was the only country that took pity on you and gave you all the best that it could offer. “O Meshaal,” the newscaster continued, “there is no other word to describe your behavior, apart from hiana (‘treason,’ — S.E.).” She then began repeating the phrase, “Meshaal the traitor, Meshaal the traitor,” in an effort to align his name with the most vile and derogatory epithet in the entire Arabic lexicon.

Traitor or not, Middle Eastern politics is well known for its complexities and elusive alliances. Meshaal made the right choice if he is to survive in this seething region. This is realpolitik at its best: What do you do, and how do you do it, when the ground beneath your feet is in flames and you have no choice but to leave and find another patron to offer you shelter?

When it comes to that, Hassan Nasrallah could learn a lesson or two from Meshaal.