Israel Cannot Count on Egypt To Deal with Hamas

As Egyptian President Mohammed Morsi is preoccupied with the political crisis in Egypt, Israel should take the initiative in jump-starting talks with the Palestinians, writes Shlomi Eldar. 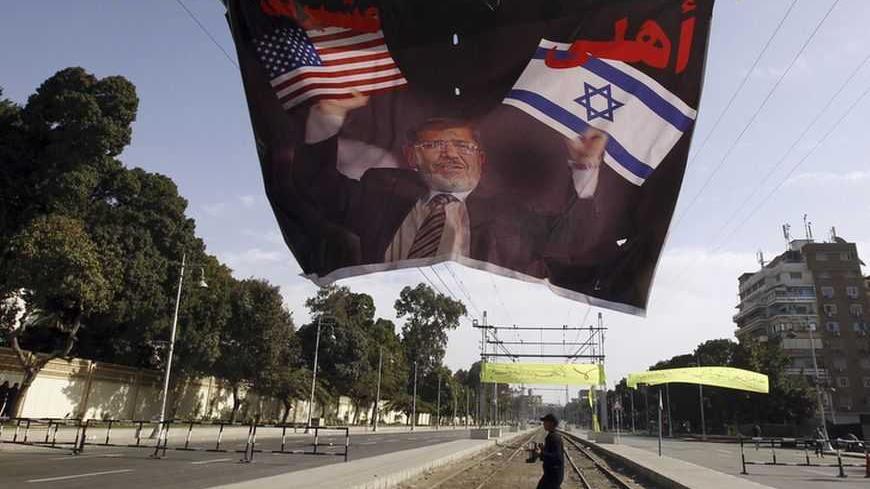 A riot police officer walks under a banner depicting Egyptian President Mohammed Morsi holding the Israeli and American flags in each hand, reading: 'My family (Israel) and my clan (U.S.)' at the presidential palace in Cairo, Jan. 25, 2013. - REUTERS/Mohamed Abd El Ghany

“And it is coming to pass that in these days there is no king in Egypt.” There is no strong leader and no guiding hand either. There isn’t a single person with the same power that former President Hosni Mubarak had in his heyday.

The revolution in Egypt created chaos. The waves of protests and anger that led to the downfall Mubarak are now threatening to overwhelm the Morsi government that replaced Mubarak. It may well be that what is happening today is a necessary step in the Land of the Nile’s political evolution after decades of totalitarian rule. Now, however, the Middle East is left without any outstanding leader who can actually take the lead and set policy. Syria is in flames. Jordan’s King Abdullah has his eyes raised beseechingly to heaven, praying that the “Arab Spring” will pass without inciting his country to violence. We have already mentioned how, in Egypt, Morsi is having a hard enough time restoring order. In Iran, President Mahmoud Ahmadinejad is entering his final months in office and will not compete in the next elections.

According to one hypothesis, “When chaos reigns (in the Middle East), Israel benefits.” In other words, this hypothesis claims that the international community, and especially the U.S. and Europe, realizes how unlike its neighbors Israel really is, and by unlike them, it means, “for the better.” The perfect iteration of this hypothesis is a famous statement that outgoing Defense Minister Ehud Barak made a few years ago: “Israel is a villa in the jungle.” Many people regarded this as a sign of Israel’s typically condescending attitude to its surroundings (i.e., “more advanced,” “more sophisticated,” and “more enlightened” than the surrounding countries), which dates back long before Barak described it in his own picturesque way.

But beyond the underlying condescension, the hypothesis is simply incorrect. Reality has proved again and again that Israel is very much influenced by events in that surrounding jungle. When push comes to shove, Israel is still a part of the Middle East, the Palestinian-Israeli conflict remains unresolved, and the loss of the region’s leaders and leadership could be to Israel’s detriment too.

The Egyptians played an active role in easing tensions and putting an end to the fighting in virtually every conflict that erupted between Israel and the Palestinians. Even in Operation Pillar of Defense, the most recent bout of fighting that ended just two months ago, it was the Egyptians under Mohammed Morsi that took steps to calm the situation. Now, however, Egypt is in flames. Any and every unpopular decision brings the masses out into the street, with the ensuing clashes, live ammunition, and casualties. There is no one in Egypt with the aspiration or ability to help maintain calm throughout the entire region. The Palestinian-Israeli conflict is simply not one of Morsi’s top priorities.

In such circumstances, the most formidable negotiators in the arena are actually the Americans and Europeans. On the other hand, the U.S. lacks the same influence and authority in the Hamas-led Gaza Strip that the Egyptians have. We mustn’t forget that the Hamas movement is a byproduct of the Muslim Brotherhood, which currently rules Egypt. So with all due respect to President Barack Obama — and he certainly deserves that respect — Hamas leader Ismail Haniyeh and Mohammed Morsi speak the same language and use the same coded phrases. The reasons that the Americans want the Israeli front to remain quiet are quite unlike the Egyptians’. Each of them has its own, different interests.

In the end, the Americans will not be hurt in any way if passions stir in the Gaza Strip, setting it aflame, and if Israel cuts off its supply of goods or even electricity. The Egyptians, on the other hand, share a common border with Gaza and feel a sense of national responsibility toward their brothers and sisters there. A Gaza Strip that is starving and besieged poses a real problem for Egypt. Gaza crossing point sector Rafah is crisscrossed with tunnels; the smuggling industry flourishes there, and any Bedouin gang can do as it pleases. That does pose a clear and immediate danger to Cairo. When Mubarak took steps to restore calm whenever the Palestinian-Israeli front heated up, it wasn’t (just) ego that motivated him. It was not simply to prove that he is the strongest, most influential Arab leader in the region. The main reason Mubarak did it was because he realized that Gaza isn’t just an Israeli problem. It is an Egyptian problem, too.

Israel will suffer tremendously in the future if it concedes without a stable partner in Egypt. This isn’t just about peace talks and maintaining the status quo. First and foremost, it is about the impact that events in Egypt have on the Palestinian-Israeli conflict.

Today Israel must not only deal with the fact that the Hamas government in Gaza has gotten much stronger in the wake of Operation Pillar of Defense. It must also contend with the fact that there is no one to rein in the Hamas government in the event of a new round of violence, and considering the particular dynamics of the region, violence could erupt again at any moment. It might come after Israel assassinates some military leader or other from the air, or it might come if Hamas believes that its strength is declining for some reason or other and it is losing its grip on power.

That is why today, more than ever, it is Israel that must take the lead in any steps that will be taken with the Palestinians. For years, Israel has been dragged into military actions instead of leading diplomatic initiatives. Even when it enjoyed brief periods of calm, Israel waited for the next round of fighting, not only knowing that it is inevitable but that someone, most likely the Egyptians, would let it go on for a few days before getting involved and brokering a ceasefire. It seems as if, on the face of things, this privilege no longer exists.

The person who was supposed to serve as compromiser and bridge between the opposing parties is now beaten, bruised, and confused. He is too busy with his own affairs. There is no responsible adult in the room anymore. There are just two children that must find a way to compromise, and they must do it on their own.