Rabbi Menachem Froman, who died March 5, believed that only religious leaders could resolve the Israeli-Palestinian conflict, as Shlomi Eldar recalls. 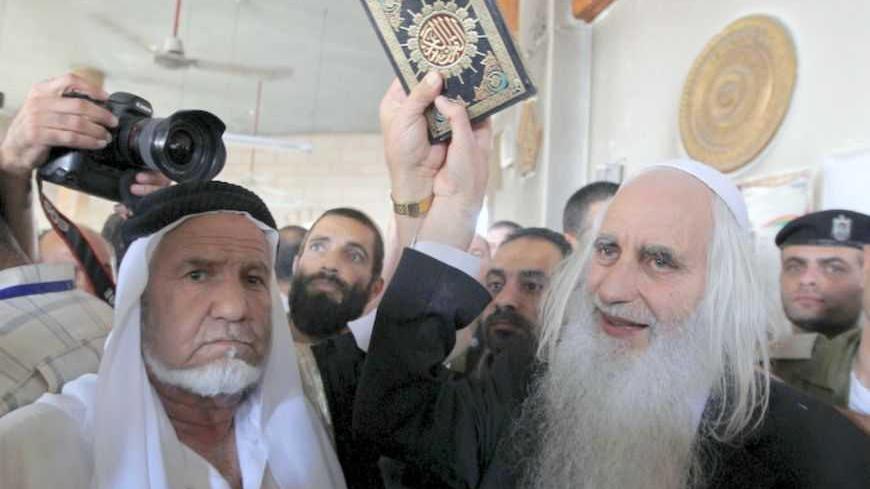 Rabbi and peace activist Menachem Froman (R) holds up one of the Qurans his followers donated to Palestinians after a mosque was destroyed by militant settlers in the West Bank village of Beit Fajjar near Bethlehem, Oct. 5, 2010. - REUTERS/Ammar Awad

Rabbi Menachem Froman, the spiritual leader of the Jewish settlement of Tekoa in Gush Etzion, died on Tuesday [March 5] after a long illness. Standing over his fresh grave, Froman’s son recalled his father with the following words:

“You taught us that the more a man enjoys freedom, the closer he is to God. You said that freedom is where all the extremes meet, and [the search for] freedom became that wild game that was your life. Even in your concern for our people, you sought out the extremes, right and left; you even forged bonds with our Arab neighbors. It was your initiative, and it became your life’s work.”

When he was done, his son joined the crowd in singing a song by Ehud Manor, which his father had asked to be sung over his grave:

“I have no other land,

Even if my land is burning.

A simple word in Hebrew penetrates

Into my veins, my soul.

My body aches. My heart hungers,

But this is my home.

I will not be silent, now that my land

Has changed her appearance.

I will never forego reminding her of this,

And I will sing it in her ears,

Until she opens her eyes…”

Froman was a man of contrasts. He was an Orthodox rabbi with many secular disciples. He was a settler, but also a man of peace, who strove endlessly to get closer to his Palestinian neighbors. Froman believed that peace is made with enemies, and to achieve this goal, one must make concessions. He believed that religion (and not land) lay at the root of the Palestinian Israeli conflict, and that only religious leaders, Muslim and Jewish alike, could find a way to resolve it. Only they could develop a common language and reach a solution that all the parties would accept as a way to end this bloody cycle of violence.

So much has already been said about this rabbi from Tekoa that I will make do with a little story about my brief acquaintance with him. It all began during Operation Pillar of Defense. It was late one Friday afternoon, just half an hour before the Sabbath started, when he called me. “I don’t believe we know each other,” he began, “but I was told that you could help. I’ll speak quickly, because the Sabbath is about to begin, and I want to recruit you for my idea.” I started wondering exactly what idea he had in mind, but his answer was immediately forthcoming. “I think that the madness and the killing must stop now, and that only religious leaders can do it. Help me find one of the leaders of Hamas as quickly as possible.”

I recognized the urgency in his tone, but I tried to take things down a notch, and explained that it was no easy task. None of the Hamas members that I knew and with whom I spoke from time to time were very available right then, during the fighting and under bombardment. I told him as gently as I could that, “They know that it’s dangerous for them to speak on the phone with Air Force jets flying above them. Their lives are in danger. All the phone lines have been cut, and I don’t think that I’ll be able to get a hold of any of them.”

“Listen, you can’t give up,” he answered. “Think about the idea. You’ll find someone. Be creative. I’ll call you the minute the Sabbath is over.”

Rabbi Froman knew that I am not Shabbat-observant, but from his perspective, the task that he assigned me was a matter of life and death, which would even justify me violating the Sabbath. He really believed that if he could just speak with Mahmoud al-Zahar, a high Hamas official, or Hamas Prime Minister Ismail Haniyeh, or Hamas leader Khaled Meshaal for that matter, he could bring about a change.

During that same conversation, he discreetly shared another interesting tidbit with me. “Listen,” he said. “I contacted the office of Prime Minister Benjamin Netanyahu, and I offered my services in organizing a religious conference, where the religious leaders of Hamas would meet with rabbis. The fighting was already underway, but Netanyahu found time to meet with me, and he invited me to come to his office. If he had no real, genuine desire, he wouldn’t have invited me. He would have kept me out, wouldn’t he?”

I was forced to admit that his story came as a surprise to me. Right in the middle of Operation “Pillar of Defense,” with the IDF attacking Gaza and sirens going off across Metropolitan Tel Aviv, the prime minister was willing to make time for Froman, who was offering to get him in touch with Hamas, out of the belief that religious leaders are inherently better at achieving peace than politicians.

The phone rang again on Saturday night. Froman sounded very excited as he asked, “Well, have you heard anything?” I regretted having to disappoint him, but I answered, “No, it is impossible.” But a man like Menachem Froman was not someone to capitulate so easily. “Don’t give up!” he encouraged me. “I’ll keep looking for people who can help me, but we must do something. We must. We must!”

Then he coughed briefly and immediately apologized: “I don’t know if you’ve heard, but I’m a little bit ill. It’s not that bad. It’s silly. My wife hasn’t thrown me out yet.”

That’s just the way Froman was. He was a dreamer. Others will say that he was naïve, but even then they admit that he was incredibly bold. He was a rabbi who lived in the settlement of Tekoa in the West Bank, but he still swam against the stream. He met with Palestinian Authority President Yasser Arafat on countless occasions, and the Palestinian leader even called him a “friend.” He had long conversations with Hamas spiritual leader Sheik Ahmed Yassin in Gaza, having made the trip there specially to see him in his home, because he hoped that they could reach an understanding. In the middle of the crisis over the Turkish flotilla sailing to Gaza, Froman flew to Turkey to meet with Prime Minister Recep Tayyip Erdogan. Froman knew that the greatest challenge in this conflict between peoples was to transform contested land into consecrated land. Only rabbis and imams could do that, he claimed. That was what religious leaders preached, so according to Froman, only they could unravel the situation and give the green light to politicians to proceed.

Even in his final days, as he lay dying from a harsh illness, Froman never stopped dreaming that there would one day be peace.

At his funeral the mourners sang, “I have no other land.” I believe that the following lines from a poem by Natan Yonatan are an equally appropriate tribute to this great man:

“Where have they gone, All of those men,

With the stature of a weeping willow,

So like an ancient fortress at the road’s end?”

Shlomi Eldar is a contributing writer for Al-Monitor’s Israel Pulse. For the past two decades, he has covered the Palestinian Authority and especially the Gaza Strip for Israel’s Channels 1 and 10, and has reported on the emergence of Hamas. In 2007, he was awarded the Sokolov Prize, Israel’s most important media award, for this work. He has published two books: Eyeless in Gaza (2005), which anticipated the Hamas victory in the subsequent Palestinian elections, and Getting to Know Hamas (2012). In 2010 Eldar directed the documentary film Precious Life, official selection of the 2010 Telluride and Toronto International film festivals, which won the Ophir Award (the Israeli Oscar for documentary filmmaking).