Hezbollah leader Hassan Nasrallah has again threatened Israel, but the threats may stem from Hezbollah's fortunes declining as a result of the war in Syria, writes Shlomi Eldar. 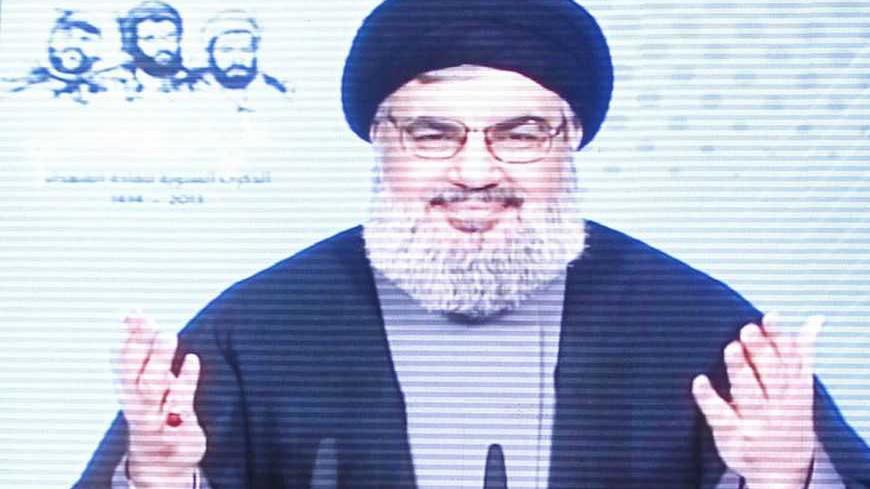 Lebanon's Hezbollah leader Sayyed Hassan Nasrallah is seen on a screen as he speaks to his supporters during a rally to commemorate Martyrs' Day in Beirut, Feb. 16, 2013. - REUTERS/Sharif Karim

Hezbollah Secretary General Hassan Nasrallah is at it again with his threats. In a speech he gave on the “Day of the Shahid [Martyr],” and which was shown on huge screens set up in the Shuhada compound in the southern suburbs of Beirut, Nasrallah boasted: “There’s a power station in Israel, which, if we strike it, will leave the whole country in the dark. Can Israel survive six months of darkness?”

Look who’s asking! The ever-present, ever-AWOL leader of Hezbollah, who has spent the past six years holed up in his bunker, hardly even daring to come out to address the masses.

It’s practically a ritual by now. Whenever he does come out of his bunker he’s been hiding in since the Second Lebanon War [2006], he takes the opportunity to issue vapid threats. On one occasion he actually threatened that Hezbollah would conquer the Galilee. Another time he warned Israel that he would destroy Tel Aviv to avenge the assassination of senior Hezbollah official Imad Mughniyah, etc. This time he threatened to leave the entire Galilee in the dark.

There’s no need for any in-depth analysis to realize that Hassan Nasrallah’s bluster and threats are inversely proportional to his dwindling strength and the troubling situation in which he finds himself. It is a classic example of lashing out defensively out of fear for his future and the future of the organization he has headed since that day in February 1992, when Israel assassinated his predecessor Abbas Musawi.

To his credit it should be noted that Nasrallah is a leader with sharp instincts, who knows how to read the geo-political map. It is safe to assume that even now, he is reading the new map of the Middle East correctly. Most importantly, he is paying close attention to what is happening in Syria to his patron Syrian President Bashar Assad, who is living on borrowed time. Nasrallah realizes that he will have to pay the price if and when Assad falls, and he’ll have to pay in cash.

It’s true that we’ve spent the past two years hearing that “The Assad era is over,” and that the Alawite regime in Syria is in its final days, but thanks to the brutal but loyal army in Syria and the support of Russia and China, Assad is still holding on. Yet while this may postpone the end, it certainly will not prevent it. The Syrian people have paid a steep price, with over 50,000 casualties, and hundreds of thousands more injured, homeless, and living in refugee camps. One would be hard-pressed to assume that the Syrian opposition, with all its factions and divisions, would abandon its bloody struggle before it deposed the person responsible in one way or another.

Assad really is a war criminal in just about every sense of the term, and Nasrallah, who was one of his biggest supporters, now realizes that he won’t benefit from his downfall. The support that Hezbollah forces are providing Assad, in close and open cooperation with the Iranian Revolutionary Guard, will hardly be a credit to him or his organization on “the day after.” The fall of Assad will be a strategic blow to Iran, but it will hurt Nasrallah even more.

But as far as Nasrallah is concerned, Syria won’t even be the worst of his problems. Plenty of people and groups are already lying in wait for him in Lebanon, eager to settle old accounts. They remember all of Hezbollah’s antics there, and especially how it got the country entangled in a war with Israel. They remember that he did the Syrian regime’s dirty work by assassinating [former Lebanese Prime Minister] Rafic Hariri. They remember the humiliation suffered by the Lebanese Army, which, until that war, made sure to stay out of the country’s southern region.

But let’s assume for a moment that Nasrallah somehow withstands the threat from within, and the militias he heads, armed to the teeth with Iranian and Syrian weapons, manage to wage war against anyone who wants to get rid of them. Even then, Nasrallah will be forced to contend with the threat from outside Lebanon, i.e., the Israelis. They not only threaten his life, but also the stability of his organization. It is this threat, from the very country that he loves to threaten, which worries Nasrallah most of all. In a candid moment after the Second Lebanon War, the Hezbollah leader replied to the angry criticism he faced in Lebanon by saying that had he known how forcefully Israel would respond, he is not sure that he would have planned the kidnapping of the soldiers along that country’s northern border — the very event that sparked the war.

Nasrallah knows that his strength is very limited, when it comes to facing Israel. Israel’s leadership has changed since the Lebanon War. The country has learned its lesson. Its ability to act as a deterrent has been resuscitated, and, as we have already mentioned, Nasrallah’s patron Assad can’t help him anymore.

Nasrallah is the first to understand his new status in the neighborhood. That’s why threats are all he has left. Remember the famous “Spider Web” speech he gave after the IDF’s withdrawal from Lebanon? To continue the metaphor of spineless invertebrates, Nasrallah’s recent threats have about the same impact as the incessant buzzing of a fly, sitting on a dying elephant.