Why Did Israel Forget About a Prisoner in Egypt? 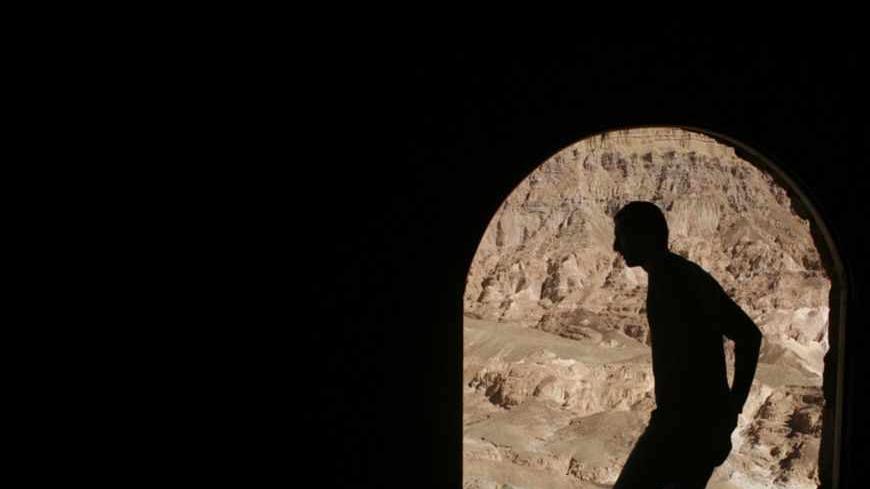 A Bedouin silhouetted overlooking the Colored Canyon rock formation in the Sinai Peninsula near the town of Nuweiba, March 2, 2007. - REUTERS/Goran Tomasevic

“Israel isn’t doing enough to free me. I am launching a hunger strike.”

With these words, Ouda Tarabin ended his letter to the Israeli Embassy in Cairo. Ouda has spent the past twelve years in an Egyptian prison, after being convicted of espionage. In his handwritten letter he claimed that Egypt did not grant him a fair trial. He asked that his letter be relayed to Egyptian President Mohammed Morsi.

In 2000, Tarabin was apprehended in the Sinai by Egypt’s Mukhabarat intelligence service, after crossing the border illegally. According to his family, he did this so that he could visit his married sister, who lives in el-Arish. Until the Israeli peace treaty with Egypt (1979), the Tarabin family lived in the Sinai, but with the return of the peninsula to Egyptian sovereignty, the family relocated to the village of Dahaniyeh in the Gaza Strip, which had a reputation as being a safe haven for collaborators with Israel. In 1991, the family moved again, this time to an unrecognized settlement near Rahat in the Negev.

In March 2000, nine months before he was apprehended in the Sinai, Ouda and his father Soliman Tarabin were charged with spying and tried in absentia in Egypt. The father was sentenced to 25 years in prison. His son received a 15-year sentence.

Unofficially, Israel does not deny that Soliman, the father, had ties with Israeli intelligence. Apparently, this is also the reason why the family chose to relocate to the Negev when the Sinai reverted to Egyptian rule. Ouda was 10 years old at the time.

It was only in 2004 that the Egyptians confirmed that Ouda Tarabin was sentenced on charges of spying for Israel and was being held in an Egyptian prison. Actually, he was jailed in Tora prison, that same infamous prison where another Israeli, Azzam Azzam served an eight-year sentence for espionage. Upon his release in 2004, Azzam told investigators in Israel that while he was in prison he heard of another Israeli who was also being held there. Though Azzam did not know his name, he asked why that prisoner wasn’t released with him.

He was told never to mention it again.

Were it not for the extensive efforts volunteered by attorney Yitzhak Meltzer, it is likely that Tarabin’s case would not be on anyone’s agenda. The Israeli media gave intensive coverage to the imprisonment of Azzam Azzam, an Israeli Druze in Egypt, and even covered the arrest of a US-Israeli tourist, Ilan Grapel, in Egypt after the revolution that toppled former Egyptian President Hosni Mubarak. On the other hand, the media has almost completely ignored Ouda Tarabin. This could be because he is a Bedouin prisoner, or perhaps because his motives for entering Egypt illegally were criminal. Regardless, Ouda Tarabin just about disappeared. He was the quintessential “Prisoner X.” Given the dearth of information about Ouda, attorney Meltzer began his campaign by exposing the Israeli public to his story. Meltzer hoped that public pressure would eventually force the decision-makers to act.

“It wasn’t easy,” Meltzer admits. In a blog post he published in April 2008 to win public support, he wrote:

“Ouda is innocent of the crime that the Egyptians attribute to him. All of the legal material surrounding his case is cloaked in secrecy. Ouda never received a copy of his indictment. He was not even present at his 'trial.' There is no written sentence detailing the charges for which he was convicted. They simply told him he was sentenced to 15 years in prison. Ouda is being kept in solitary and is allowed to leave his cell for just two hours every day. The Egyptian government is conspiring against Ouda, apparently because it has issues with his father. … Ouda came to Israel when he was a 10-year-old boy. Only the wicked punish the children for the sins of the fathers. Join the effort to bring Ouda home to Israel.”

For reasons of full disclosure I should note that attorney Meltzer approached me, too, a few years ago, asking me to cover Ouda’s case on TV. Nevertheless, the news editors at the station where I worked proved somewhat indifferent to the story of a Bedouin sitting in Tora prison.

It took him several years, but Meltzer was finally able to breach this wall of apathy. Ouda Tarabin may still be sitting in an Egyptian prison, but he is no longer “Prisoner X.”

When Meltzer learned about the hunger strike that the prisoner he represents launched (on April 24, 2013), he said: “When Ehud Olmert was prime minister, they did not want to risk the strategic alliance with Mubarak, and would not come into conflict with him. They had an opportunity, too. The QIZ (Qualified Industrial Zone) Agreement between Israel and Egypt was under scrutiny. The Egyptians wanted to reopen the agreement and make changes in it to benefit them. One condition for implementing such changes could have been Ouda’s release. At the time, Former Interior Minister Eli Yishai went to Egypt and raised the issue of Ouda Tarabin, but he was rather lethargic about it. When he returned, I asked him, “Why didn’t you make the changes provisional? Why didn’t you link the two?' His answer was: ‘Ehud Olmert simply wasn’t interested.'”

Meltzer has another example of the listless Israeli attitude toward Tarabin case: “Olmert released a significant number of Palestinians as part of the dialogue mediated by Egypt. I approached Tzipi Livni, who was then foreign minister, and asked her to include Ouda in the deal. Her response was, ‘I don’t want to tie negotiations with the Palestinians to Ouda Tarabin.”

Attorney Meltzer has spent the past seven years volunteering on behalf of Tarabin’s release. And yet, he still fails to understand why Israel is officially silent on the matter. In an effort to release some of his frustration, he continues to list other missed opportunities. “After Mubarak was overthrown and the SCAF (Supreme Council of Armed Forces) governed the country, the Americans applied pressure on SCAF Chairperson Mohamed Tantawi to release another US-Israeli citizen, Ilan Grapel, who was also accused by Egypt of being a spy. Tantawi agreed to release Grapel, but he would not include Ouda in the deal.”

In an interview with Al-Monitor, Meltzer revealed that Egyptian President Mohammed Morsi has an Israeli proposal on his desk to release all Egyptian prisoners in Israel in exchange for the release of Ouda Tarabin, but that there has been no response to this proposal. This proposal encompassed more than 60 Egyptians who are being held in Israeli prisons. Virtually all of them were caught along the border and charged with theft or attempting to sell arms or drugs. According to sources in Israel, Egypt isn’t especially eager to get them back or to release its Israeli prisoner in exchange for them.

And so, the only option left to Ouda Tarabin is to launch a hunger strike. Will this finally get the decision-makers in Israel and Egypt to do something about his case?

After so many disappointments, attorney Yitzhak Meltzer wouldn’t bet on it.