The Hamas-led government in Gaza has shut down an English-language club amid several recent steps to limit cultural activity within the Strip, writes Khaled Kraizim. 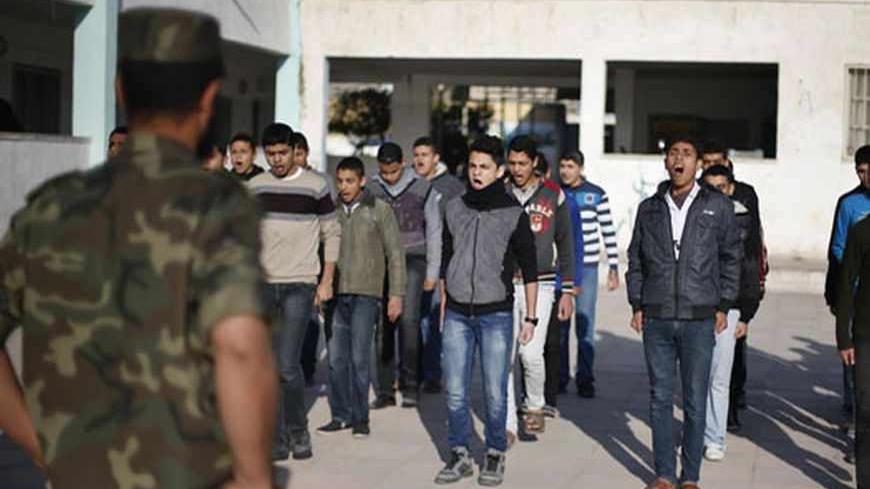 Palestinian students take part in a military-style exercise in the courtyard of a high school in Khan Younis in the southern Gaza Strip, March 6, 2013. - REUTERS/Suhaib Salem

Mohammad al-Saleh, a 16-year-old from Gaza, loves reading. He is a student intent on studying the English language as soon as he enrolls in college. Bending his head down, he carries his books and walks out of Gaza’s municipal library. He had been working in the library with his peers to put the final touches on a project.

Most young men in Gaza usually try to avoid studying English before college, due to the common perception that it is a hard and complicated language. However, Saleh’s case was different, and his interest in the language was quite peculiar. Yet, the Hamas-affiliated municipality in Gaza stepped on Saleh’s hopes to perfect his language skills — voluntarily and freely, with the help of a trainer — by shutting down an English-teaching club that he was part of.

Gaza’s municipality prides itself on several libraries and public cultural centers, which were initially designed for citizens so that they could visit them and benefit from the books and training sessions held there. However, the municipality issued several sudden decisions this week forbidding visitors from bringing their laptops to the library and banning interaction between girls and boys above the age of 9. Moreover, the meetings of the English-language club, which was part of the “Raise a Reader” initiative to enforce the role of public libraries in Gaza, were suspended.

This youth initiative aims to reinforce the importance and vitality of books and their role in developing the abilities of individuals, family and society. Youngsters participate in many events and cultural activities that contribute to enriching society through knowledge and promoting a culture of reading among Palestinians by targeting widely-visited public and civil institutions.

Seven months ago, anyone who was interested could participate freely and voluntarily in the English-language club by attending the club’s weekly meeting held in an open space in Gaza’s public municipal library. Around 50 students and graduates used to benefit from its activities.

Saleh, speaking to Al-Monitor, said that the decision to ban the English-language club came as an unexpected shock to students, without any compelling reasons for such a move.

He elaborated that the club held meetings to develop the English-language skills of dozens of students. “We are adamant about reopening the club and using the Internet, which had been shut off for visitors and students.”

Alaa Masaab, a student in his 20s, says that the club helped him with many skills and to gain new knowledge, especially in speaking with others. It was able to do this through direct practice, whereby participants would be given different subjects to be discussed in an organized manner among themselves.

Masaab expressed his surprise to Al-Monitor that the club was shut down, despite that its training lectures were held in public areas of the library. According to him, this closure is unjustified, and “there is no longer any activity taking place in the library or the place where we would sit.”

When the head of the English-language club, Saad Habib, asked library officials for an explanation for the club’s closure, their answer was that they were holding training sessions in the same place, knowing full well that the club met in an open area where no such sessions were held by the library, said Habib.

Habib continues, “When I asked those in charge of the place for a reason that the use of laptops was not permitted, they answered that some misuse them, even though the public library does not offer Internet service to visitors.

“As a citizen carrying a Palestinian ID, it is my right to use the public library for the purposes for which it was built: to bolster the education of individuals, thus advancing society.”

He confirmed that there was no justification for closing the English-language club. “It met for only two hours each week. It is impossible and illogical to say that the library is overcrowded with activity because of a training session for students held two hours a week,” he noted.

The Gaza municipality issued a statement saying that “the club had been ongoing for more than seven months. It is our right in the administration to diversify the activities. We may [later choose to] reopen the English-language club, the German-language club and another one for Turkish, with sessions held as they have been.”

It further read: “The general administration has prevented the use of laptops in libraries and centers, and banned connecting to the municipality’s Internet network because of their use for improper purposes such as viewing inappropriate video clips that insult the morals, religion and values of the Palestinian people. This has especially been the case among the youth.”

This move by the municipality incited the anger of a number of writers and intellectuals, including writer Yousri al-Ghoul, who commented by saying, “The head of the English-language club chose to offer the potential needed for the success of its diverse events and activities, which included various comprehensive training sessions, in addition to literature and poetry seminars and other activities. On the other hand, the official role of the institution seems to be nonexistent.”

At the end of 2012, the Hamas' government Land Authority demolished one of the most well-known cultural centers in Gaza — the Union Gallery Forum, owned by the Palestinian Contractors Union — without prior warning. The Land Authority’s plows, which had become part of the police force, demolished and tore down the building.