International solidarity delegations to Gaza have struggled to enter the territory since Egypt's tightening of its blockade, cutting off a vital source of essential medical assistance. 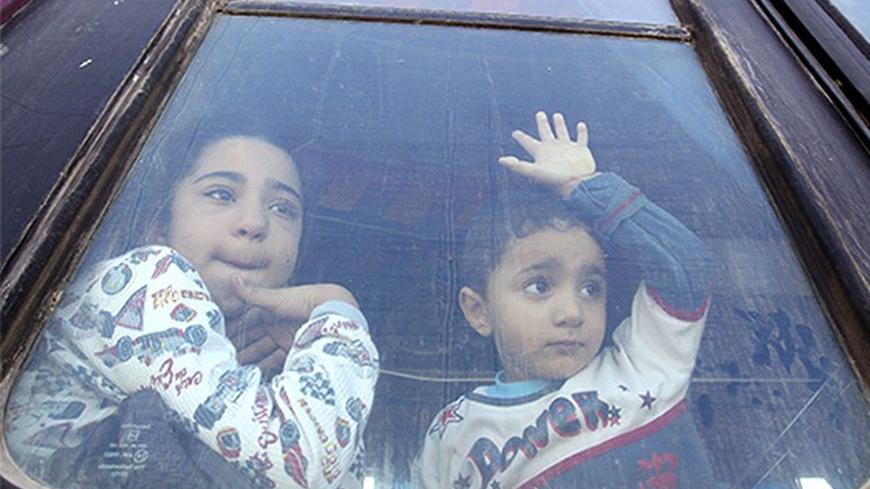 Palestinian children hoping to cross into Egypt look out of a bus window at the Rafah crossing between Egypt and the southern Gaza Strip, Oct. 8, 2013. - REUTERS/Ahmed Zakot

GAZA CITY — Hamas officials would once ask visiting international solidarity delegates to bring medicine and supplies, which are scarce, to the Gaza Strip. The international visitors, who included pro-Palestinian activists, lawmakers and former diplomats, would meet with Hamas officials in Gaza and extend invitations for them to visit their (mostly Muslim) countries. While in Gaza, both sides would draft plans for drumming up support for Gaza in Islamic and European capitals.

Since the overthrow of Egyptian President Mohammed Morsi in July, however, such delegations no longer travel to Gaza, and local Hamas leaders have struggled to get out. Egyptian restrictions on movement through the Rafah border crossing with Gaza has stifled international support for the besieged Palestinian enclave. The Hamas government’s Governmental Committee for Receiving Delegates announced that 27 delegations and more than 340 solidarity activists had visited Gaza in June alone, the month prior to Morsi’s overthrow.

Alaa al-Bata, head of media relations for the Hamas government's Ministry of Foreign Affairs, confirmed that there had been a marked decrease in the number of solidarity delegations since the June 30 revolution in neighboring Egypt. “We used to receive more than 25 delegations a month before that, but for the last two months, for example, we haven’t received any,” Bata told Al-Monitor.

These delegations, in addition to delivering humanitarian aid, in particular medical supplies, would bring international attention to besieged Gaza, which Israel has blockaded, with Egyptian complicity, since 2007.

“At the first half of this year, we received more than 60 medical delegations that provided us with needed drugs. The delegations also managed to carry out 1,000 surgeries for critical cases that were in need of outside treatment,” said Ashraf al-Qedra, spokesman for Gaza’s Ministry of Health, in a phone interview with Al-Monitor. Qedra said the hospitals now have increasing numbers of patients who urgently need surgery, but can neither have it performed by delegations as in the past nor by doctors abroad because the Rafah border is so often closed.

Local nongovernmental organizations would also receive funding from visiting delegations for small projects targeting needy families and educational institutions before they were suspended. “Even the government used to get funding for some of its small projects. It’s definitely a loss to no longer receive any of this support,” Hamas' Bata noted.

Ihab Ghussein, a spokesperson for the Hamas government, said that the time is now for urgent assistance from international delegations, given the severity of the siege. “During [Egyptian President Hosni] Mubarak’s time, the tunnels were working normally. Things have never been worse than they are now. We literally need these delegations now,” Ghussein told Al-Monitor at his office.

He added that the need for international convoys is not only for material support, but is also incorporeal, as people across the world should be made aware of the suffering of the Palestinians in Gaza, who are cut off from the world by the Israeli-Egyptian siege.

“We do appreciate [international solidarity activists'] support and call upon them to resume the great job they were doing,” Ghussein said, mirroring a request by Hamas Prime Minister Ismail Haniyeh in an Oct. 19 speech in which he called on pro-Palestinian activists to resume their attempts to break the siege. Haniyeh asserted that the current crisis is not only represented by Egypt's destruction of the tunnels under its border with Gaza, but also by the halt to solidarity convoys through the Rafah border.

Despite the large number of flotillas and delegations that have visited Gaza in the last five years, only the Turkish humanitarian vessel Mavi Marmara received widespread international attention, in May 2010, due to Israeli commandos' storming of the ship in international waters, killing nine activists. After the incident, Israel loosened the siege somewhat under international pressure.

Despite the difficulty of access, not all international activism has been curtailed by the total blockade. A joint international–Palestinian initiative called Gaza’s Ark has recently launched a project with the aim of launching a ship from Gaza to the outside world. The plan is to convert a large fishing boat into a cargo ship that will carry Palestinian products from Gaza to buyers abroad. The vessel is scheduled to set sail in spring 2014.

Various producers of goods in Gaza, as well as other parts of Palestine, are being put in contact with buyers from around the world. The purchasers pay for the goods in advance, and Gaza's Ark will deliver the merchandise to them.

When asked whether the organizers were worried about Israel preventing the boat’s exit from Gazan waters, Ehab Lotayef, an Egyptian-Canadian engineer, activist and one of the project organizers, pointed out that Gaza's Ark is a civilian, unarmed peaceful vessel. “We will work hard over the coming months to make sure that world pressure will mount against Israel's use of force and its piracy of civilian boats. This is a long overdue stand the world should take. There is no justification whatsoever for Israel to stop or confiscate the Ark or the merchandise it will be carrying,” Lotayef asserted in an online interview with Al-Monitor from Montreal.

Some activists who traveled to Gaza with solidarity delegations have chosen to remain in the territory and engage in additional activities. For example, Joe Catron, an American who came to Gaza with the Tahrir 4 delegation of March 2011, is continuing his activism in Gaza, lecturing in educational institutions and reporting news to international media outlets. “We were the first international delegation to cross the Rafah border after Egypt's Mubarak government fell on Feb. 11,” Catron told Al-Monitor.

Catron said that under the initially relaxed policies of the Morsi government, there had been some fear that there would be an influx of solidarity tourism. “With the new, crippling restrictions imposed by Egypt's new military government, this is clearly no longer the case,” he said.

Maria del Mar, 65, a Spanish activist who traveled to Gaza on the first siege-breaking flotilla in 2008, arrived in the Palestinian territory for the fifth time a few days before speaking with Al-Monitor. She came through the Rafah border, noting that this trip was one of the hardest she had experienced. “There were clearly new restricting procedures this time, I had to submit so many documents to the Egyptian authorities before I was let in,” she said.

In addition to focusing on Egypt’s recent harsh measures against Gaza, activists should, Catron urged, keep the pressure on Israel, the main protagonist in the siege on Gaza and the crisis it currently faces. “It would be a mistake for Palestine solidarity activists to focus their anti-siege efforts only on barriers to trade and travel imposed by Egypt,” he asserted.

Abeer Ayyoub is a columnist for Al-Monitor's Palestine Pulse. She graduated from the Islamic University of Gaza with a BA in English literature. She is a former human rights researcher turned journalist whose work has also appeared in Al-Masry Al-Youm, Al Jazeera and Haaretz. On Twitter: @Abeerayyoub