Activists are pushing for Gaza to join the West Bank in an initiative that will allow women to divorce without their husbands' permission. 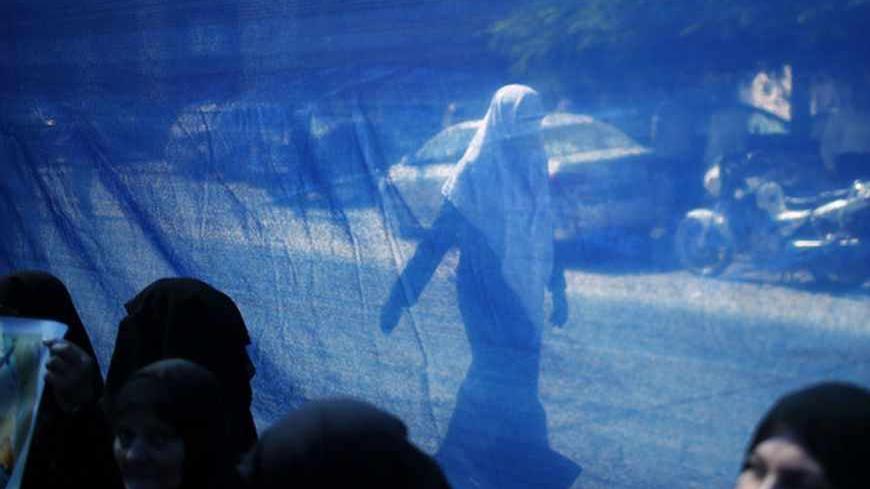 A woman is seen through a fabric sheet as she walks past a rally calling for the release of Palestinian prisoners from Israeli jails, in Gaza City Sept. 2, 2013. - REUTERS/Mohammed Salem

The Supreme Religious Court in the Hamas-controlled Gaza Strip is considering legal amendments allowing women to divorce their husbands when they can show proof that their married life cannot go on.

The proposed amendment derives from a more moderate interpretation of Islam and is likely to face opposition by hard-line lawmakers from Hamas, the Islamic movement that runs the Palestinian enclave separately from the West Bank, which is ruled by President Mahmoud Abbas' secular Fatah party.

The Khula, or unconditional divorce law, gives women the choice to break up Islamic-approved relationships before or after marriage in exchange for giving up their financial rights. The dominant traditional version of divorce is that the man has the final and only word on it.

Hassan Al-Jojo, the head of the Supreme Religious Court in Gaza, said that while he received the proposal from the religious court in the West Bank, his court won’t be able to apply it before the beginning of 2014, requiring approval from the Palestinian Legislative Council (PLC) in Gaza — in other words, Hamas.

"We appreciate our brothers in the West Bank coordinating with us. We will do our best to apply it as soon as it’s approved," Jojo explained to Al-Monitor.

Gaza and the West Bank have been divided administratively since 2007, when Hamas took over Gaza and ousted Fatah forces.

During a workshop in Gaza City last month, Jojo warned that his council's bid to implement the Khula law "may face opposition from the PLC."

Jojo did not give a reason as to why the proposal might be opposed in Gaza, but his warning implies political and ideological considerations on behalf of Hamas.

This idea was denied by Yahya Moussa, a moderate Hamas lawmaker in Gaza’s PLC. Moussa told Al-Monitor that the amendment should not face any issues in the PLC, as it is in line with Islam.

“I don’t think anyone from the parliament will oppose it. This amendment will retain dignity for women and the society as well,” Moussa said in a phone interview.

Jojo said that the legislation comes as a solution for dozens of women who are being denied their right to divorce, especially those who have been abandoned by their husbands.

In Gaza, Jojo plans to go further in implementing the law, if it's approved, than in the West Bank, where he believes it's partially implemented. In the West Bank, women can split from their partners only during the engagement period, when they have a marriage certificate, but must still be living with their families.

"We will apply it for all the women, either before real marriage or after," Jojo clarified.

According to Palestinian traditions, families prefer that engaged couples have an official marriage certificate so their meetings are religiously and socially accepted.

The West Bank law thus differentiates between engaged and married couples. In an engagement, the couple are not permitted to have sex before the wife moves in with her husband, despite an official marriage certificate.

What distinguishes “real” marriage is, therefore, the act of sex. A marriage is considered “real” once the couple are living in the same home, and the married couple have engaged in intercourse. Living separately, despite having an official marriage certificate, is considered the engagement period. One problem that has arisen in attempts to align societal attitudes with the legality of marriage is that there are now two types of divorce: one for the engagement period, and the other for the marriage.

In Islam, a man pays a non-refundable amount of money to his bride as a dowry before getting married. At the same time, he pledges to pay another sum in the future in case he decides to divorce her. Yet, prior to this law, a woman could not divorce unless she sued her husband for causing her harm.

With the new law, women will be able to divorce without their husbands' permission, but will have to pay them back every single penny, including their dowry and living costs from their time together.

The nongovernmental Center for Women’s Legal Research and Consulting in Gaza estimates the divorce rate in the coastal enclave for the years 2011 and 2012 at 17.1%, of which 40% were "engaged" women with a marriage certificate. The head of the center, Zihab Ghuneme, welcomed the change.

"By asking the man for divorce permission, the woman is no longer free. This is what we want to fight," Ghuneme told Al-Monitor, explaining that improvements in the law came after hard lobbying by feminist organizations in Gaza. She added, "We haven’t asked for a new law because we are totally against issuing new laws under two divided governments in Gaza and the West Bank, yet modifying such a part of the law became urgent."

Ghuneme also urged the religious court to stop changing women's marital status on their identity cards from single to married during the engagement period, because doing so will deem them officially divorced if they decide to end the relationship before moving into the husband’s home and engaging in sexual intercourse.

"Every woman has the right to get divorced for whatever reason she sees reasonable. She doesn’t have to wait for a court sentence to set her free. This is a right that Islam approved for her," Ashour told Al-Monitor.

Jojo said that the new decision does not contradict Sharia, as marriage in Islam is based on love and tolerance. If neither exists in a marriage, the couple should break up and live in peace separately. He noted, "Marriage is an agreement between two sides; logically, both sides should have the right to end it."

A woman seeking a divorce from her husband, who is denying her this right, told Al-Monitor on the condition of anonymity of her frustrations with the current law. She protested, "Why should a man choose on my behalf? It’s my right as well, Islam says it!"