A women's association in Gaza is fighting to address the glacial legal process to obtain a divorce and the lack of support for women during those interminable periods. 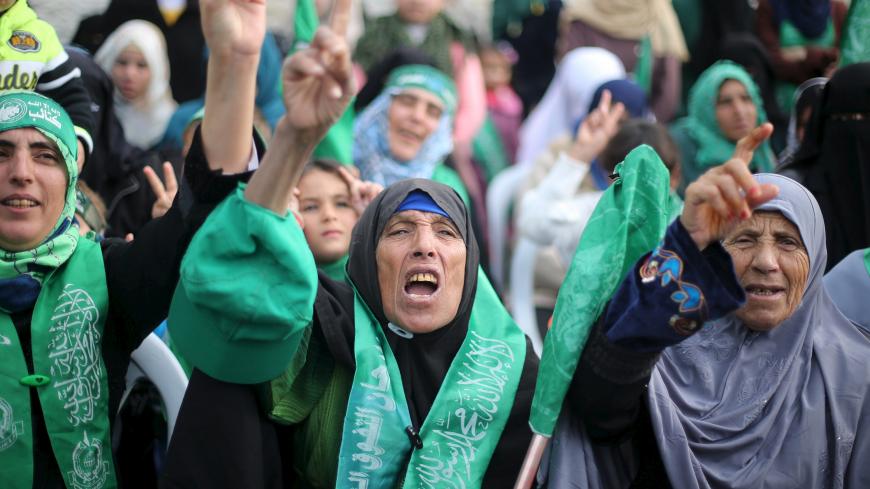 RAMALLAH, West Bank — Rima from Gaza City has been struggling for more than 18 months to obtain her divorce papers from the Sharia Court.

Six years ago, her husband left for Libya to work there, only to abandon her later on without divorcing her, leaving her with four boys and one little girl. The 45-year-old Gazan learned that her husband had married another woman in Libya when he sent the message through some Palestinians working there.

Rima found herself in a miserable situation: With no money to support her children, she was dependent on the aid of her relatives. She applied for assistance from the Ministry of Social Development, which offers divorced women a $200 monthly allowance. But as she is unable to provide divorce papers or proof of separation, she has gotten nothing so far.

“I applied to the court more than a year and a half ago to obtain divorce papers from my absent husband. My case is still sitting on the shelf there. I also went to the Women’s Health Center of the Culture and Free Thought Association, which engaged one of its lawyers to look into my case. They promised me that I will get the papers soon. I am still waiting,” Rima told Al-Monitor.

Rima’s story is similar to that of Tamara, 37, who is also from Gaza City. Tamara’s story began in 2007 against the backdrop of the Palestinian division and Hamas taking control of the coastal enclave. Her family was loyal to Fatah, and her husband to Hamas.

“With the outbreak of the 2007 clashes in Gaza, my ex-husband used to beat me in front of people, particularly his family. At that time, my brothers had traveled to Egypt and I was left alone to endure this cruel life for my son and daughter,” Tamara said.

“I left my husband’s house and lived at my mother’s, who welcomed me after learning that I was beaten. But my husband refused to give me a divorce until two years ago when I went to the Women’s Health Center. They got me a lawyer who filed a lawsuit, and the court gave me a divorce in absentia two years later.”

Women in the Gaza Strip are often unable to finalize their divorce in the courts because of all the bureaucracy and legal procedures entailed by a law passed in 1954. Judges sometimes delay their decisions to give couples even more time to rethink the divorce.

Separation is different. If a man chooses to separate from his wife, he can do so without appearing before a court or providing a legal reason. A woman who can prove that she is separated — either with written testimony from her husband that he has departed or testimony from family and neighbors that he has left her — can ask for aid if she does not have any income.

A man can verbally divorce his wife, but the divorce still must be registered in court where he would have to provide a legitimate reason for divorcing her. If the woman is the party who wants a divorce, not only does she not have the right to divorce her husband verbally, but the grounds on which she can file are much narrower, such as impotence, absolute poverty and imprisonment. In order to get their husband to consent to a divorce, many women waive their right to alimony from their husband, even if they are in need. Instead, they apply for government aid.

In May, the Women’s Health Center launched a campaign to address the slow proceedings of the courts, and finalization can drag out for 10 years.

The campaign is part of an overall program to combat increasing gender-based violence against girls and displaced women in Gaza, in partnership with the United Nations Population Fund.

“The problem of separated women is one of the thorniest and sensitive issues at the Islamic courts, and some women are left in this grey area for two to five years. This is a waste of their time and a means to pressure them to give up their rights,” Manal Makat, the campaign’s coordinator, told Al-Monitor.

She stressed that the law applied in Gaza requires women to wait a year, which is seen as a trial period for reconciliation. Only then can they file a lawsuit and wait three more years for the long litigation process to complete.

This situation is different but no better for women in the West Bank where hundreds of women have been struggling to get divorced since 2012 when the Palestinian High Judicial Council's implemented "khula" — an Islamic form of divorce initiated by the wife by returning her dowry to the husband.

Several awareness-raising activities have called on all women to participate in the campaign. In one, several separated women formed a circle around the name of the campaign that was written in sand, explaining their reasons to the local media. The organizers have promoted the campaign over social media and enlisted the help of legal associations to help galvanize decision-makers into action.

“Women face major challenges before courts, whether they want to get divorced with or without alimony. Many husbands refuse to divorce their wives until they waive many of their legitimate rights,” Zainab al-Ghonaimy, director of the Center for Women's Legal Research and Consulting in Gaza City, told Al-Monitor.

Ghonaimy stressed, “The problem lies in the law itself, as it does not allow women to divorce except for specific reasons such as the husband's impotence, his inability to financially support his household, or his disappearance or imprisonment.” A woman can file for divorce from her husband if he is sentenced for three or more years in prison, according to Article 96 of the Law on Family Rights.

Women who turn to the courts become entangled in unending legal procedures and bureaucracy under the discretionary power of judges, who tend to be extremely patriarchal in handling the cases, according to Ghonaimy. She believes that many loopholes in the law have to be addressed before women enjoy the same rights as men in cases of divorce.