The Sharia court in Gaza has ruled that husbands can divorce their wives on grounds of abuse, which also relieves the men of having to pay the women support. 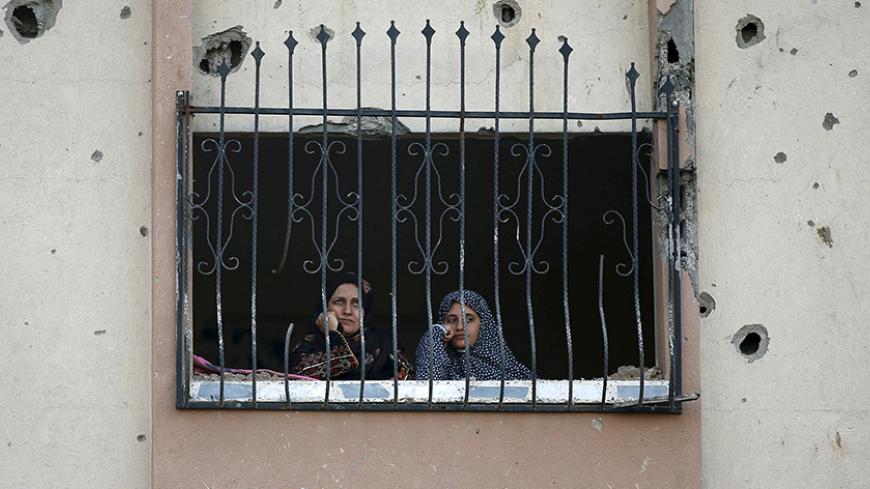 Two Palestinian women look out of their house that witnesses said was damaged by Israeli shelling during a 50-day war last summer, Gaza City, May 12, 2015. - REUTERS/Mohammed Salem

GAZA CITY, Gaza Strip — The Higher Sharia Court Council in the Gaza Strip issued a decision Feb. 7 granting a husband the right to file for divorce if his wife subjects him to verbal or physical abuse. The ruling has angered the feminist community, because it gives the husband the opportunity to divorce his wife while denying her rights to which she would otherwise be entitled in a divorce.

Prior to the decision, applying for a divorce based on verbal or physical abuse had been limited to women. This was so simply because men can divorce without providing a reason or even filing suit in court. If a wife filed for divorce and proved abuse, she did so with certain rights guaranteed — such as retention of the “mahr” (money and possessions paid by the groom or his family to the bride at the time of marriage), the right to obtain “mu’akhar” (money and possessions the groom is legally responsible for providing the wife, but not necessarily at the time of marriage) and receipt of the value of their furniture — as agreed upon in the marriage contract.

Omar Nofal, chairman of the Sharia Appeals Court, told Al-Monitor that the new decision was issued to bring about “equality between men and women" by ending the women's monopoly to lodge divorce proceedings for abuse. Nofal said the court issued the decision after it became clear in several abuse cases lodged by wives that the husbands were in fact the victims, not the women. He said there are no statistics on the number of husbands abused​ at the hands of their wives in Gaza.

He further explained the actions taken when a husband files for divorce because of abuse, stating, “If the husband proved that he was subject to violence by his wife, the judge gives them a month to reconcile, and in case they fail, the judge appoints a representative from each family to reconcile. In case they also fail, the financial compensation that the husband must pay the wife will be determined depending on the amount of violence he was subjected to by his wife, which could reach the point of not giving her any of her due in case of severe and harmful abuse.”

Amal Syam, director of the Women's Affairs Center in Gaza, denounced the decision for only serving men’s interests. “[It] does not achieve any equality between men and women, and it encourages divorce,” she told Al-Monitor. “The Palestinian personal status law is biased in favor of men, as a man can divorce his wife any time he wants, without any reasons given and without filing a lawsuit. In this case, he just has to respect the wife's financial rights. Yet, with the new decision, a man can lodge a divorce lawsuit without fulfilling his wife's rights.”

Syam further noted, “This is while in the case of a wife resorting to her right to divorce for this reason, she will face obstacles — [such as providing] proof that she was subjected to violence and witnesses. Such conditions are very difficult to meet for a Palestinian wife who lives in a closed social environment with her husband.”

There are many loopholes in the personal status law, Syam explained, that allow husbands to avoid respecting a divorced wife's rights and can even force her to waive her rights in exchange for divorce. Syam said, “This is why the judiciary needs to overturn this decision and make major amendments to the law, so that women receive their rights and are protected from violence, instead of issuing new decisions favoring men.”

Iyad Shorbaji, a social psychology professor at the University College of Applied Sciences in Gaza, told Al-Monitor that the court decision points to increasing violence against men as a result of current economic conditions. “There are growing cases of violence against men who reject their wives’ demands for divorce because they are unable to pay them their financial due. Moreover, there are wives who abuse their husbands as they are aware that the husbands will not divorce them because they are unable to manage the financial burden resulting from divorce.”

Shorbaji claimed that the new decision was issued to support the husbands. He also remarked that some violence toward men can escalate to the point of murder, recalling that in January, a husband had been stabbed to death by his wife in Khan Yunis in what police said was a “marital dispute.”

Speaking to Al-Monitor, Zeinab al-Ghonaimi, a human rights activist and director of the Center for Women's Legal Research and Consulting in the Gaza Strip, expressed her dissatisfaction with the decision. “We are not denying that there are battered men, who represent a very small percentage compared to battered women. Yet, the problem is that the Sharia court rushes to give this small number rights, while it leaves battered women without any rights or laws to protect them.” She, like Nofal and Shorbaji, noted that the decision basically allows men to obtain a divorce without having to provide the financial support his wife would otherwise receive.

Ghonaimi said that violence against women has increased in Gaza. “Although the latest statistics on violence in the Palestinian territories was issued in 2011, positive changes have not come about since then. Rather, negative changes have occurred when it comes to violence against women.” The 2011 figures from the Palestinian Central Bureau of Statistics in 2011 show that 51.1% of women in Gaza had been subjected to violence by their husbands.

Despite the feminists’ efforts to improve women's lives and achieve equality between men and women in Gaza, steps like the court's decision on divorce takes matters in the opposite direction.