In Gaza, a woman can opt to divorce by khula, whereby she financially compensates the husband. 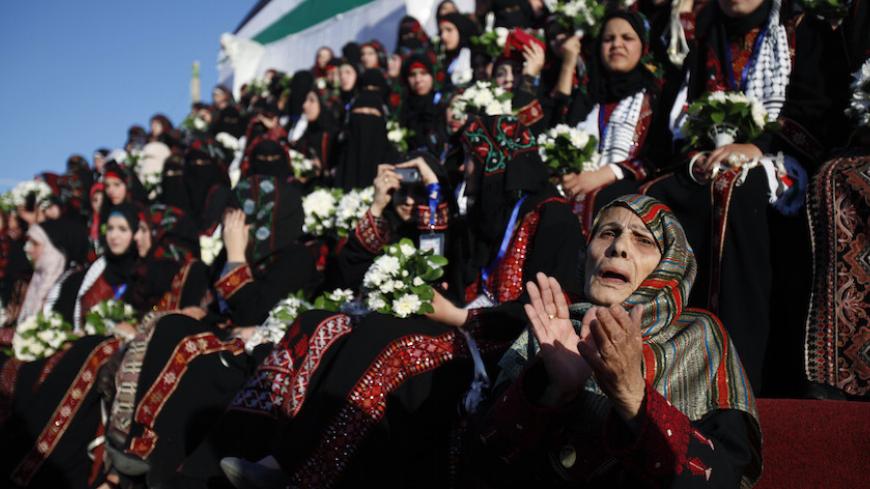 A Palestinian woman celebrates beside brides during a mass wedding for 250 couples in Rafah, in the southern Gaza Strip, Dec. 19, 2012. - REUTERS/Ibraheem Abu Mustafa

GAZA CITY, Gaza Strip — Three years ago, Samira Jamil reached a dead end. She had no choice but to divorce her husband by khula, whereby a wife financially compensates her husband.

Jamil, whose name has been changed for this article, told Al-Monitor that the main reason behind the divorce was financial: Her husband was stingy. "Stinginess was among the most important reasons for divorce by khula. The list, however, goes on and includes the non-fulfillment of marital duties and financial exploitation," she said.

Lebanese-born Jamil, 52, said that the divorce process took a month and a half. She ceded all her financial rights. "Although I am fragile by nature, oppression strengthened my character. This is why I filed for divorce by khula before the courts. For the process to be quickly completed, I ceded my deferred dowry and the house's furniture," Jamil said. "I was ready to give up everything in exchange for divorce."

Sharia courts in Gaza seek to find balance when it comes to the right to file for divorce, so as to change the traditional concept that the sole eligibility to divorce comes from the husband. Sheikh Hassan al-Jojo, head of Gaza's Supreme Religious Court, said that the Islamic faith advocates partnership between spouses. Therefore, both individuals have a say in their marriage because marriage can only be consensual.

"When marriage ends, it should also be consensual," he told Al-Monitor. "Although the Islamic Sharia gave men the right to divorce however and whenever they want, restrictions were imposed on this right. Women also have the right in some cases to divorce. The man cannot, for example, divorce his woman arbitrarily. We seek to have a law that compensates women for any arbitrary divorce."

In Gazan courts, the judge permits female-initiated divorces in several cases, including a husband's imprisonment, abandonment and sexual impotency. Another way to end marriage, Jojo said, is divorce by khula.

"Divorce by khula in Sharia courts is consensual and not ruled in court," Jojo explained. "For the khula to become a court rule, the law must be amended by the legislative council. We sought to have it become so, and we presented a draft law that respects Palestinian traditions and customs. However, the paralysis of the legislative council impeded the passing of the three-article law."

He continued, "The consensual divorce by khula is when the wife cedes her rights, or some of them, in exchange for divorce by agreement. The judge implements the agreement. This type of divorce has been applicable since the formation of Sharia courts, pursuant to the personal status law that has been in place since Ottoman rule in Palestine."

Jojo noted that the Gaza Strip's Sharia courts register hundreds of divorces per year. However, many women have been waiting for more than 20 years for a law allowing them to divorce their husbands.

Although khula is based on mutual consent, it can often pose a financial difficulty for the woman, since she is required to financially compensate the man. As such, opportunities for divorce are easier for wealthy women.

According to Jojo, if the law is passed, it will serve high-income women only. "This law is not beneficial to some women, because divorce by khula is done in exchange for compensation and some do not have the financial capacity to do so. The law may solve some problems but not all of them," he said.

Although hundreds of women would benefit from a khula law, conservative Palestinian culture remains an obstacle.

Civil and Sharia lawyer Islah Husniyah explained that many women who would otherwise want a divorce, instead endure unhappy marriages to protect their homes.

"When serious problems occur and women reach a stalemate, they file for divorce," she said. "The divorce is decided on by the Sharia judge in case the husbands were not spending on the house and all legal means did not pay off, or in case of the long absence of husbands, and other reasons."

She continued, "Most women have to stay due to financial and familial conditions. Many sacrifice to stay with their children. In addition, financial status does not allow [some] women to divorce by khula. This is why they do not opt for this option."

Dunia al-Amal Ismail, a writer, feminist activist and head of Gaza's Creative Women Association, said that khula in Gaza has helped women who can pay back their husbands for the dowry and gifts. However, financially unprivileged women cannot benefit from this kind of divorce.

"Even elite women in Gaza have to watch out for social traditions that prevent them from opting for divorce by khula," she added. "These traditions apply to them as much as they apply to normal women. Fear of how their behavior might be religiously interpreted may also constitute an impediment."

Ismail said social acceptance of khula could lead many women to embrace this option. "Fearing the stigma of divorce, women have second thoughts when considering divorce," she said. "For divorce by khula to be effective, women need an open social culture and an effective promotion of the right concepts of Islamic faith. A woman is religiously and humanly allowed to file for divorce, and divorce can happen."