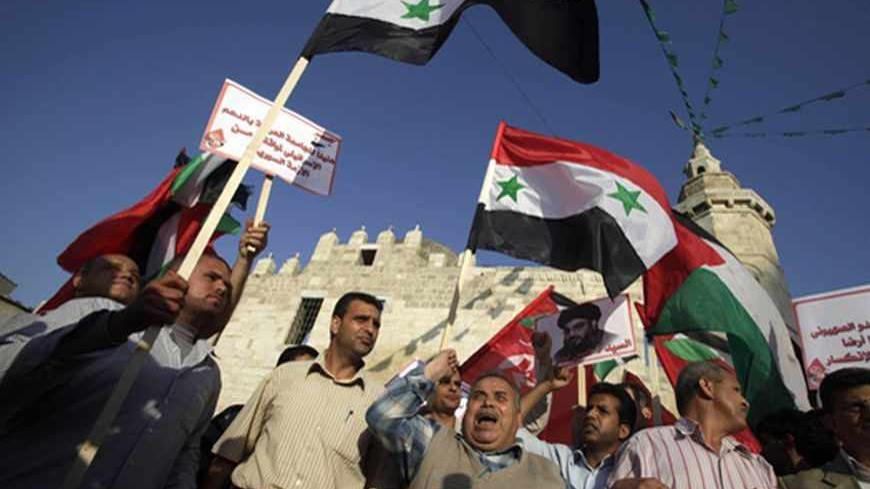 Palestinian supporters of leftist parties take part in a protest against Israeli airstrikes close to Damascus, in Khan Younis in the southern Gaza Strip, May 7, 2013. - REUTERS/Ibraheem Abu Mustafa

On May 7, the Hamas government police forces violently dispersed a rally in protest of Israel’s attacks on Syria. The rally was organized by the Popular Front for the Liberation of Palestine (PFLP) in Khan Younis, the Gaza Strip. Seven individuals were injured while five other journalists who were covering the rally were attacked, arrested and had their cameras confiscated. The five journalists were later released.

The Ministry of Interior’s media office in Gaza issued an official apology on its Facebook page for the “rough” police behavior on the demonstrators and journalists, pledging to open an investigation into the incident and punish those involved in the crackdown.

The Ministry of Interior’s spokesman Islam Shahwan, local news agencies reported, visited the site of the dispersed rally and to the police station where the journalists were detained and verbally apologized for what happened, saying the ministry is stepping up its investigation to ensure justice for the victims and freedom of journalism.

In addition, Ihab al-Ghussein, director of the Hamas-run government press office, condemned the police suppression of the rally and the attack against journalists covering the PFLP-organized rally. Ghussein stressed that the government in Gaza flatly rejects such behavior including the arrest of journalists while doing their work.

Meanwhile, Maan News Agency reported that human rights g roups in Gaza — such as the Palestinian Center for Human Rights, Al Mezan Center for Human Rights, Palestinian Network of Non-Governmental Organizations and the Palestinian Center for Development and Media Freedoms — denounced the use of force by police and the attack on the basic freedoms of the demonstrators and their right to freedom of assembly and expression. They also called for opening a serious investigation and inflicting proper punishment on those who committed the violations against the demonstrators.

While the reaction of human rights groups to the police crackdown was notably strong, the response by journalists to the incident and the government’s apology was even stronger.

Samir Zakout from Al Mezan Center for Human Rights explained that the journalists’ response to the police violence was “different” and “unprecedented,” which is a positive indicator that the government will not have free hands attacking personal freedoms and exercising oppression as it wishes. In fact, victims of human rights violations, he added, are starting to speak up and take action against the government and police repression.

“While we have become used to these kinds of violations taking place and an apology to be issued by the government in the wake of such incidents, the journalists’ response was clearly stronger than before,” Zakout told Al-Monitor.

“The journalists for the first time have rejected the government’s apology. They called for more concrete steps to be taken. They asked for an immediate and serious investigation to be opened and for its results to be published. They asked for real punishment for the police members who were involved in the crackdown. Moreover, they organized two rallies in protest of the police oppression, one on the same day and the other coinciding with [Yusuf al-]Qaradawi’s visit to the Gaza Strip, which they boycotted.”

In order to get their reaction to the government’s apology, Al-Monitor reached and interviewed some of the journalists who were attacked and detained in the incident.

In an interview with Al-Monitor, Sharif al-Neirab, member of the Palestinian journalists’ syndicate, dismissed the government’s apology and its “overused” claim that this incident is an “individual incident” that does not represent the overall police behavior in Gaza.

“We’ve become used to the government coming out with such unconvincing claims that this was done outside the system. This will no longer be accepted since such police behavior has been repeated several times over the course of the past years,” Neirab said.

He explained that the journalists are becoming “bold in challenging and speaking up against government oppression and its intimidation policies.” The government, he pointed out, has never made good on its promises to open investigations in the wake of similar incidents as they do not publish the results of the investigation and present them to the public. “This leaves no doubt,” he concluded, “that the police oppression is rather a policy, not an individual behavior or mistake.”

Similarly, Mamhoud Abu Taha, one of the five journalists arrested in the incident, reiterated the same view.

According to Abu Taha, who is a cameraman at the Palestine Today satellite TV channel, the government in Gaza is directly responsible for all forms of police repression.

“The policemen surely have certain instructions on how to deal with journalists, and it has become characteristic of them to use brute force and repression against citizens. Never have the investigation results been published which demonstrates that this is a government policy, and the decision [to use force and disperse the rally] was made by the government,” Abu Taha argued.

Ahmad Ghanem, correspondent of the Al-Mayadeen satellite TV channel, contended that the Hamas government only provides excuses for more police repression and attacks against journalists by “blaming similar incidents on individual behavior while at the same time never bringing those responsible to justice.”

“We’ve been beaten for carrying our cameras,” Ghanem said. “The government continues with its farcical apology policy and gives lame excuses to this horrible attack on journalists. We’ve condemned this, spoken up and took action against it, but this is not going to stop them [the police] from doing it again,” the Al-Mayadeen correspondent told Al-Monitor.

According to Ghanem, although the journalists’ response was clearly different and stronger this time, it is not sufficient and, on its own, will not put an end to the ongoing attacks on journalists and freedom of the press in Gaza. The government’s policy of dealing with journalists, he contends, will not change, and, in fact, the “Hamas [government] will escalate its attacks because it gives impunity to itself, its police and its members.”