Palestinians disgruntled by ongoing power outages have expressed their frustration through street demonstrations, but the police have not been accommodating. 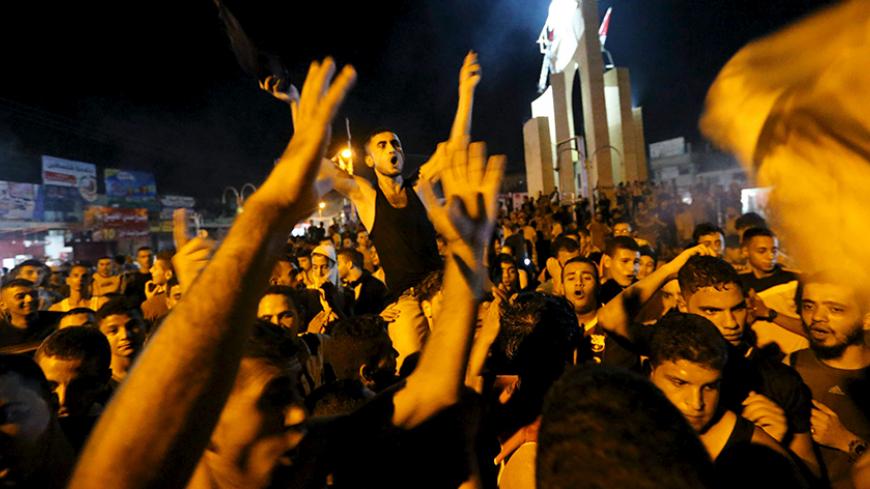 Palestinians take part in a protest against the electricity crisis in Rafah, in the southern Gaza Strip, Sept. 13, 2015. - REUTERS/Ibraheem Abu Mustafa

GAZA CITY, Gaza Strip — Popular protests in Gaza in mid-September were met with repression by the police, who detained demonstrators and dispersed gatherings, sparking outrage among human rights organizations, which demanded that the security forces abide by the law and respect the people’s right to protest and peaceably assemble.

Massive protests Sept. 12-14 were triggered by ongoing chronic power outages. Gaza experienced an increase in power cuts this summer, with most residents only receiving four to six hours of electricity a day. Although Gazans have endured frequent blackouts for years, the sweltering summer temperatures and unfulfilled promises of increased fuel imports to operate the local power plant have pushed locals to take to the streets. The protesters blame President Mahmoud Abbas, the consensus government as well as Hamas and Fatah for the situation and are demanding that the parties separate their political bickering from the electricity crisis paralyzing all aspects of life in Gaza.

M.R., a 27-year-old protest organizer who requested anonymity for reasons of safety, told Al-Monitor, “The police suppressed the protests and detained a number of participants under the pretext of failure to obtain authorization from the Ministry of Interior.” He said that the requirement to obtain prior authorization is a violation of the law, stressing the right of citizens to protest peacefully and spontaneously.

“The police allow protests in an arbitrary manner — protests led by Islamic currents are authorized, while protests organized by all other political currents are not, and if these protests are staged spontaneously, they are definitely suppressed, as was the case in the recent protests,” M.R. said.

Samir Zakout, an activist and coordinator of the Field Research Unit at the Al Mezan Center for Human Rights in Gaza, said the center had received complaints from protesters as well as journalists subjected to repression during the electricity protests and forced to sign a statement pledging not to participate in the movement. “Preventing peaceful assemblies, suppressing protests, forcing protesters to clear protest areas and requiring permission or authorization to organize a protest are all absolutely illegal practices that the police are not entitled to exercise,” said Zakout.

Walid Abu Jabara, 22, was detained by security forces in Gaza during the Sept. 14 protest at the Square of the Unknown Soldier in Gaza City. “I was arrested by the police, in addition to six other young men, at exactly 9 p.m., and we were taken to the General Intelligence headquarters in the city and subjected to interrogation for hours about the reasons for our participation in the protest and our political activity,” said Abu Jabara. “A few hours later, investigators told us that there was an order by the High Command to keep us under arrest for 24 hours with General Intelligence, but after several hours of detention, another decision to release us was issued, at 2 a.m., in exchange for our signing a pledge not to participate in protests and to abide by public morals.”

Ahmed Selmi, 20, took part in a Sept. 13 protest in Rafah. “At precisely 10 p.m., I was subjected, along with dozens of other young protesters, to repressive practices by security members dressed in police uniforms and by some in civilian clothes. We were blocked from reaching the office of the Gaza Electricity Distribution Company in the city to protest the worsening of the power outage crisis,” said Selmi. “I was beaten by a police officer with the butt of his machine gun, and he was yelling and ordering us to end the protest and go home, otherwise we faced arrest, which led to the evacuation of the protest square.”

In a Sept. 15 press release, the Palestinian Center for Human Rights (PCHR) condemned the dispersal of peaceful protesters, the detention of protesters and efforts to block media coverage of the demonstrations. The organization stressed that the right to peaceful assembly is guaranteed under the Palestinian Basic Law and international conventions. The release cited repressive actions on Sept. 12-13 in a number of governorates, included statements by protesters who were assaulted and detained by police officers as well as by members of the Izz al-Din al-Qassam Brigades, Hamas’ military wing, and accounts by journalists prevented from covering the protests and who had their equipment confiscated.

Iyad Bezm, spokesperson for the Ministry of Interior in Gaza, rejected the accusations leveled against the police. “The facts on the ground are clearly contrary to the PCHR press release. Citizens in some areas of Gaza took to the street, and the police force ensured their protection and safety and created an appropriate setting allowing them to make their voices heard. Security forces exercised the highest degree of restraint toward the protesters until the end of the demonstrations,” Bezm claimed on his Facebook page. “Some police interventions took place within a narrow scope and aimed to preserve public and private property, prevent anarchy and sabotage and keep the popular movements within their peaceful, demand-based context.”

A number of Facebook users denounced Bezm’s posts and questioned his credibility. Among them was Ahmed al-Odaini, who responded in the comments section of Bezm’s post, “This is not true. Young men were prosecuted, assaulted and dragged, my friend. What happened is a violation of rights guaranteed by the law and all UN international conventions on human rights.”

Al Mezan's Zakout believes protest organizers should notify the police in advance of a demonstration to help them ensure protesters' security and address traffic-related issues, but he also noted, the police are not permitted to prevent protests or to require prior authorization. Zakout denounced the Ministry of Interior’s failure to conduct investigations into recent events and to take disciplinary action against police officers and security forces members who assaulted protesters. He also stressed the need for an independent commission to investigate the suppression of protests.

Increasing pressure from the intensification of Gaza's various crises is pushing citizens to spontaneously protest regardless of the possible repercussions. So far, Palestinians' right to protest and express their opinion have not been abolished despite the attempts to suppress the September demonstrations.