Qatar pledged to donate $12 million to help ease the Gaza Strip's electricity crisis, following a wave of massive protests against Hamas' ineffectual running of the electricity sector in the Strip. 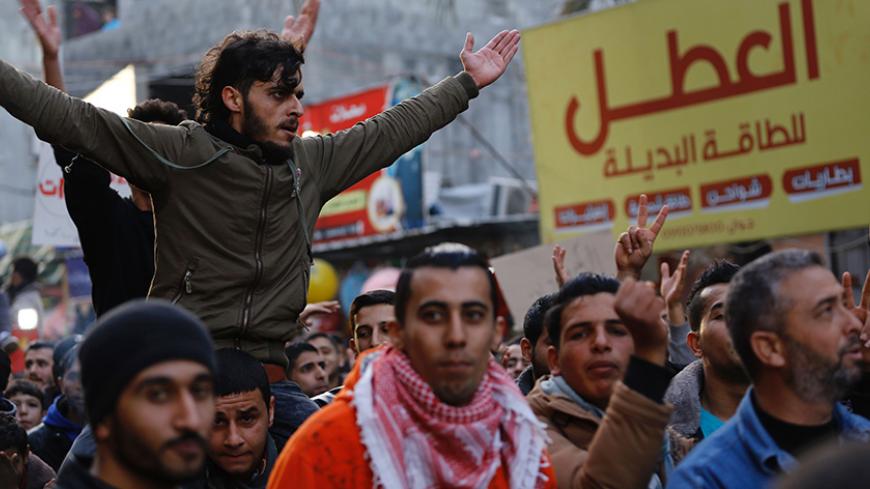 GAZA CITY, Gaza Strip — Following massive protests in the Gaza Strip over a lack of electricity, Qatar pledged on Jan. 15 to donate $12 million to purchase fuel for Gaza's sole power plant over a period of three months. Gaza's power outage crisis has culminated in recent days after three generators at the plant stopped operating, leaving residents with just four hours of power per day.

The Gaza Strip relies on three sources for electricity. The Israel Electric Corporation provides 120 megawatts daily in exchange for payment from the Palestinian Authority. This supply has not increased since 1976, even as the population in the Gaza Strip has grown to 2 million. Egypt provides the Gaza Strip with 32 MW daily, and Gaza's own power plant provides between 60 to 80 MW, though this figure is typically much lower, since the generators are often inoperable due to a lack of fuel.

The Gaza Strip needs about 400 MW per day to cover the electricity needs of its population, but at the very best it only meets 50% of that amount. The crisis has recently worsened as low temperatures hit the region, prompting residents to take to the streets Jan. 12 across the Gaza Strip to protest the crippling power shortages. But Hamas-affiliated security services dispersed the protests and launched a campaign of arrests and prosecutions targeting the organizers.

The largest protest was staged in Jabaliya refugee camp in the northern Gaza Strip, where protesters marched to the local headquarters of the electricity company run by Hamas. But the activists organizing the protest, as well as some protesters, were arrested.

Hamas security services are currently pursuing Mohammed al-Talouli, 24, a resident of the Jabaliya camp, under the pretext of his calling for protests. The right to peaceful assembly is guaranteed by Article 2 of Palestinian Public Meetings Law No. 12 of 1998, which provides that citizens have the right to organize public meetings without being subject to restrictions.

Security services have stormed Talouli's family home several times searching for him, but Talouli is currently hiding out elsewhere.

Ahlam al-Talouli, Mohammed's sister, told Al-Monitor, “Before and after the protests, we received four notices from the security services in the Gaza Strip summoning Mohammed to investigation at the security centers, but he did not appear before them since he did nothing against the law. The last time they broke into our house to search for him, on the eve of Jan. 13, they were carrying batons and they confiscated some of our personal computer devices.”

The security services terrified the children in the house, said Ahlam. They identified themselves as members of Gaza’s General Investigation Department and internal security apparatus, but “they had no legal search and arrest warrant issued by a public prosecutor,” she said.

Saeid Lulu, 29, a Gaza City resident, was also summoned to the headquarters of Gaza's internal security apparatus. “They summoned me on charges of inciting the protests that were staged in the city since Jan. 12 until Jan. 15,” he said.

"I received a telephone call from the internal security apparatus on Jan. 14," he said. "They told me that they just wanted to talk to me for a few minutes. When I went to their office, they arrested me and subjected me to a lengthy interrogation from noon until 9 p.m. Their questions focused on the protests against the electricity cuts, and they accused me of mobilizing citizens to protest.”

Lulu said that investigators confiscated and went through his mobile phone, looking for evidence to be used against him, such as any communications urging citizens to protest. “They opened my personal mobile phone, which is still to this day in their possession," he said. "They searched everything on it but did not find anything that may convict me. They punched me in the face and stomach and verbally abused me.”

The wave of arrests and interrogations stopped Jan. 16, following the intervention of a number of Palestinian parties. Despite the harsh tactics used to disperse and intimidate protesters in Gaza, Maher Abu Sabha, the undersecretary of Hamas’ Ministry of Interior, posted a message on Jan. 15 to the ministry’s Facebook page, stating, “The right to demonstrate and express one’s opinion is guaranteed, provided it does not prejudice public property, lead to sabotage and create chaos. We are one with our people; we are facing the same crises.”

The Independent Commission for Human Rights (ICHR) in Gaza warned in a Jan. 14 statement that the electricity crisis could have serious repercussions on Gaza's overall human rights situation. The commission denounced the extreme measures taken by security forces.

“The ICHR is deeply concerned about the human rights violations that took place on Thursday, Jan. 12, in Jabaliya refugee camp in the northern Gaza Strip," read the statement. "Security forces fired shots in the air trying to disperse the peaceful protests called by the youth movement demanding an end to the electricity shortage crisis in the Gaza Strip. The anti-riot police attacked a number of protesters, while security services subsequently raided the homes of some protesters and arrested a number of them.”

Bahjat al-Helo, the ICHR's awareness coordinator, told Al-Monitor that the ICHR had followed up on 49 of the summons issued against activists. According to Helo, only 14 activists have been arrested so far, while nine homes were raided.

“The arrests of protesters and activists, and the raids of their homes by the security services affiliated with the Ministry of Interior in the Gaza Strip, is a violation of the right to peaceful assembly and to freedom of opinion and expression," he said. "This undermines the Gaza authorities’ obligations and duties to respect citizens' rights and freedoms, and their service-related demands aimed to preserve human dignity.”

The Gaza Strip protests are a bold sign of dissent that, for the first time, denounce the Hamas government, which has controlled the Gaza Strip for more than 10 years. But Hamas and its security services have their minds set on security measures like arrests and interrogations to resolve any such dissent.