Several journalists from the Gaza Strip have recently been kidnapped by the Hamas-run security services, beaten and tortured, to finally be released after being instructed not to criticize the movement. 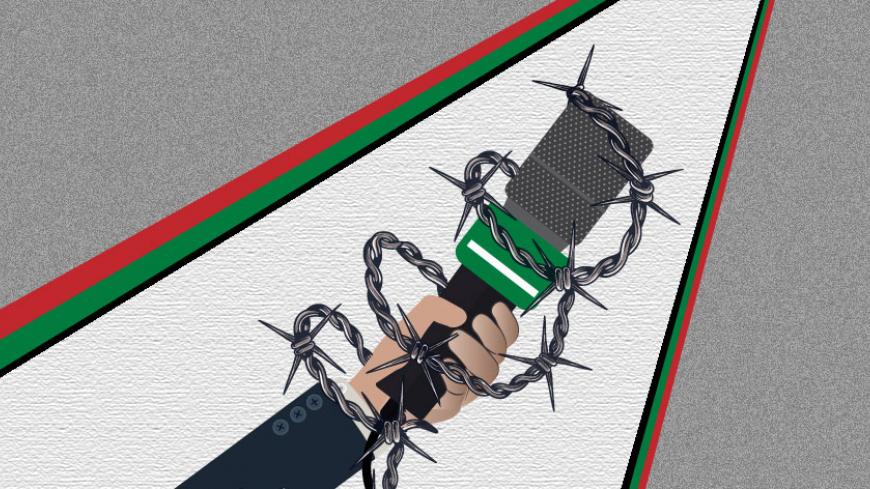 CAIRO — Amer Baalousheh, a journalist from the Gaza Strip, never expected the Hamas-affiliated security services to abduct journalists whom they consider against the movement, until it happened to him. He was abducted from the streets of Beit Lahia in the northern Gaza Strip on April 29.

Baalousheh, 26, who works as a reporter for the Egyptian El Badil newspaper, has also recently emerged as a youth activist and has led many demonstrations, most notably a Jan. 12 electricity protest in Gaza.

“At approximately 6:30 p.m. on Saturday [April 29], two civilians started following me as soon as I left my home in Beit Lahia. Suddenly, a bus approached me. Gunmen opened the doors and pounced on me along with the two walking behind me. They forced me into the bus and took me to the headquarters of the Internal Security in Jabaliya camp,” Baalousheh told Al-Monitor.

He explained that they started beating him as soon as they took him. “Interrogation started at 8 the next morning. They questioned me about the electricity protests that started and ended in January. We only demanded that the electricity situation in Gaza be improved. The officers kept assaulting me and insulting me until 3 in the afternoon," he said.

Investigators asked Baalousheh, who was detained at the Internal Security headquarters for one day, not to talk about politics or anything related to the Hamas movement. They also accused him and his fellow protesters of receiving external funding and working according to certain agendas.

In like manner, Palestinian militants kidnapped Mahmoud al-Zaq, who serves as the secretary of the National Labor Authority in the Gaza Strip, at the entrance of the Shajaiya neighborhood east of Gaza City on the evening of April 19.

He told Al-Monitor, “I was coming home at 3 p.m. when I stopped to buy some medicine at a pharmacy at Shajaiya’s entrance. The minute I stepped out of the car, four unmasked men attacked me and forced me into their car. Some passersby tried to intervene, but my kidnappers threatened them with their weapons.”

He said, “In the car, they tied my hands behind my back, tied my legs and blindfolded me. They beat me up and insulted me for 20 minutes, until we reached what seemed like a camp or a training center of theirs, where they continued beating and insulting me and their leader came in and joined the party.”

Zaq was taken for three hours, after which his kidnappers told him never to talk about politics again and instructed him to stay at home and never participate in political events, before ditching him in an agricultural field. He said that the message behind his kidnapping proves which party is responsible, in reference to Hamas.

On May 2, Hamas’ Internal Security apparatus summoned and arrested dozens of Fatah leaders and activists in Gaza in order to prevent them from participating in demonstrations in support of Palestinian President Mahmoud Abbas.

Al-Monitor tried to contact Eyad al-Bozom, the spokesman for Hamas’ Interior Ministry in Gaza, but to no avail. However, spokesman for the Gaza police Ayman al-Batniji simply said that the Ministry of Interior launched a crackdown against activists and journalists for “spreading rumors and false news to instill fear and terror among people.”

Mohammed Abu Hashem, a legal researcher at the Palestinian Center for Human Rights, told Al-Monitor that the situation of freedom of expression in the Palestinian territories is bad in general, especially in the Gaza Strip. This poor situation has been perpetuated by existing laws, policies and systematic violations against journalists and opinion-makers, creating a general state of fear that prompted journalists to practice self-restraint so as not to provoke the authorities or conservative forces in society.

He added, “The Palestinian Press and Publications Law includes vague texts that allow the authorities to interpret them as they please. The same goes for the Penal Code applied in the Gaza Strip, which mentions the crimes of slander and defamation. It also stresses the definition of libel, so that talking about corruption is extremely difficult, especially in the absence of transparency and a law that protects the right to access information. Thus corruption cannot be revealed or discussed.”

Abu Hashem noted that unknown attackers have recently assaulted opinion-makers, which is quite dangerous, especially since the identity of those responsible is yet to be discovered. “Authorities in the Gaza Strip are held responsible since they are locally and internationally committed to providing protection to journalists and opinion-makers and preserving their right to freedom of expression,” he said.

He stressed that over the past month, the Palestinian Center for Human Rights monitored dozens of arrests against the backdrop of freedom of opinion and political participation; some victims were tortured and insulted. He added that there could never be any accurate statistics about freedom of opinion in the absence of transparency and under the intentional blackout on the reasons for arrest.

The number of violations against journalists and political activists in the Gaza Strip has recently escalated, and various methods of arrest, abduction and torture are practiced. As officials and citizens remain silent, one could only wonder whether such violations have become a natural thing in this society.