The Interior Ministry in the Hamas-run Gaza Strip is establishing a police force to protect tourist and hotel facilities after threats and attacks against some of those facilities by militants against the backdrop of holding mixed-gender concerts. 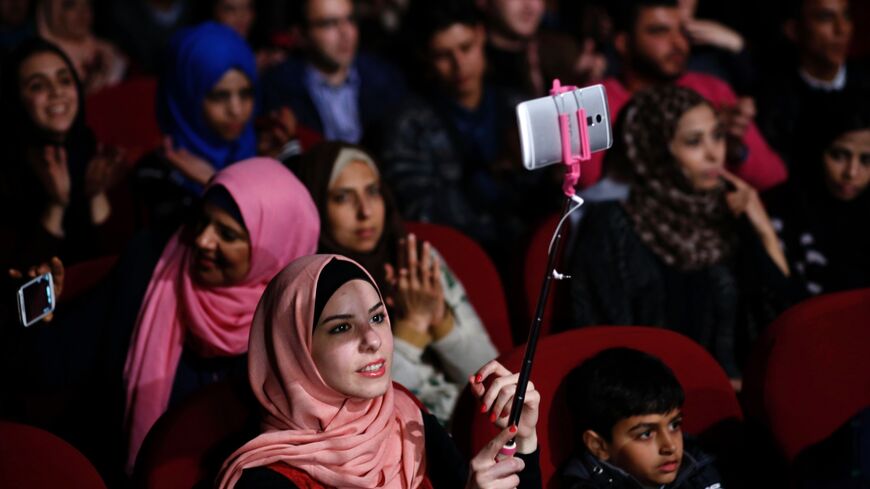 Palestinians watch the group Watar Band perform during a concert in Gaza City on Feb. 25, 2016. Musicians and other entertainers have found it hard to make a name and living for themselves in the Hamas-run Gaza Strip as they struggle to find venues and instruments, let alone get permission to play. Also, there have been attacks on venues that allowed mixed-gender concerts. In part as a result, Gaza has formed a tourism police force to protect residents. - MOHAMMED ABED/AFP via Getty Images

The announcement came during a meeting Salah held with representatives of the Palestinian Committee for Restaurants, Hotels and Tourism Services and owners of tourist facilities in the Gaza Strip.

Salah urged the owners of these facilities to cooperate with the security authorities to ensure the success of the mission of this new force. He stressed that the police force is exerting utmost efforts to pursue outlaws who attack or attempt to harm tourist facilities inside the Gaza Strip.

In recent weeks, several tourist facilities and restaurants in the Gaza Strip faced threats and attacks by militants against the backdrop of the holding of mixed-gender concerts.

A concert held at the Cedar Restaurant, west of Gaza City, on July 25 sparked a great deal of controversy in the besieged enclave. A female singer performed in the presence of a large male audience, breaking with prevailing customs and traditions in Gaza.

In a parallel incident, on Aug. 5, five unknown individuals attacked the Bianco Resort, one of Gaza’s most luxurious tourist sites. The attack with an explosive device caused part of the wall surrounding the seaside tourist site to collapse. The attackers wanted to prevent the holding of a mixed-gender concert.

Police spokesman Col. Ayman al-Batniji told Al-Monitor that all technical preparations are underway to enable the tourism police force to start soon carrying out their duties to protect tourist and entertainment facilities.

Batniji said the other objective behind the establishment of the police force is to address many of the technical and procedural problems facing the tourism and entertainment sector in the Gaza Strip. Tourism and entertainment facilities will seek protection via the tourism police and will go through the organization to obtain permissions to organize and hold some activities and events, he added.

Batniji further said that the suspects in the recent attacks and threats were arrested. He said that investigations into those incidents, specifically the bombing of the Bianco Resort, are nearing completion and that their results will be made public soon.

Meanwhile, video footage that went viral on social media of a woman swimming naked in one of the pools of the Bianco Resort on Aug. 13 caused an uproar in Gaza. It also stirred fear among tourism facilities owners about potential attacks. This incident prompted the Interior Ministry to issue a press statement confirming that it was investigating the case. It reported that the video was filmed and published by the woman's husband, who was arrested pending further proceedings in the case.

Al-Monitor repeatedly tried to contact the Bianco Resort management to talk about the threats the resort received and get an opinion on the decision to form the tourism police force. The management refused to comment.

The head of the Palestinian Committee for Restaurants, Hotels and Tourist Services, Abdo Ghoneim, praised the establishment of the tourism police force, saying it would not only ensure protection for tourist facilities but also solve many technical procedures between the owners of these facilities and government authorities.

Ghoneim told Al-Monitor that the deployment of the police force reassures the owners of tourist facilities and their clients. “These facilities have sustained  huge financial losses due to these attacks coinciding with closures due to the coronavirus pandemic,” he said. “This threatens the tourism and hotel sector in Gaza.”

The attacks and threats against some tourist and hotel facilities brought to mind a series of simultaneous bombings that took place in the Gaza Strip on Aug. 27, 2019. These were carried out by extremist groups against Hamas’ security forces. Three security personnel were killed and many others were injured.

For his part, Salah Abu Hasira, the former head of the Palestinian Committee for Restaurants, Hotels and Touristic Services in Gaza and manager of al-Salam Restaurant, told Al-Monitor that the formation of the tourism police force is an urgent necessity in light of the threats and provocations that tourism facilities have been recently facing.

He urged the Interior Ministry in Gaza to train the members of this force to deal professionally with the requirements of the tourism and hotel sector in the Gaza Strip, and deal with foreigners and people of different religions.

On Aug. 7, the Palestinian Center for Human Rights appealed to the Interior Ministry in Gaza to take precautionary measures to prevent any attacks on tourist facilities, prevent any disturbance of civilian life, and enforce the rule of law.

Mohammad al-Asi, 42, a resident of Gaza City, told Al-Monitor he no longer visits tourist and entertainment venues amid the constant threats of terrorist attacks to some of them, particularly those that hold mixed-gender concerts.

For his part, Mazen Sharab, 37, who lives in the northern Gaza Strip, said he believes the fear of bombings in tourist places is exaggerated. “These attacks occur in all countries of the world,” he told Al-Monitor. “The tourism police force will provide more safety for citizens and these facilities. It will contribute to the development of the tourism and hotel sector in the Gaza Strip.”

In recent months, the Gaza Strip witnessed an uptick in concerts and music events, with the Hamas-run Interior Ministry granting more permissions to the owners of tourist and hotel facilities to organize them, despite criticism from some extremists and Salafi groups.