Tourism officials in Palestine's national consensus government are planning to revive the Gaza Strip's ailing tourist sector — once they have permission to start work. 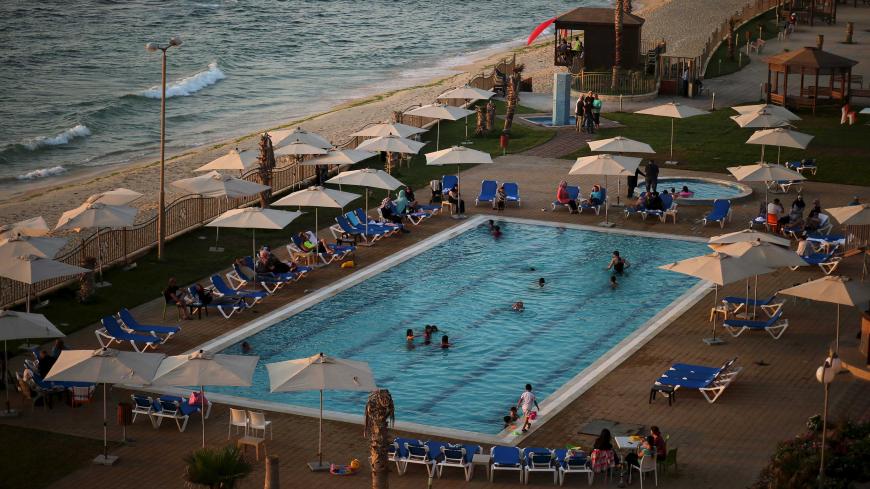 Palestinians swim in a pool as they enjoy the warm weather with their families at the Blue Beach Resort in the Gaza Strip, July 30, 2015. - REUTERS/Mohammed Salem

GAZA CITY, Gaza Strip — Members of the national consensus government arrived in the Gaza Strip Oct. 2 as part of the reconciliation agreement reached in Cairo, making it the first such visit of a national consensus government delegation to Gaza since 2013. The reconciliation between Hamas and Fatah has left many with hopes that Gaza's tourism sector will be revived. The reconciliation will hopefully replenish the economy, which suffered estimated losses of $160 million during the years of the rift due to weak tourism.

Ali Abu Srour, the deputy minister of tourism and antiquities in the consensus government, told Al-Watan Voice Oct. 31 that his ministry will promote domestic tourism in both Gaza and the West Bank. “We held several meetings in Gaza and met with the Palestinian Society of [Tourist and] Travel Agents and the Palestinian Committee for Restaurants, Hotels and Touristic Services in Gaza," he said. "We will work based on a common strategy in all Palestinian territories.”

Meanwhile, Gaza-based businessman Naim Zakout opened a new hotel in the Gaza Strip, which he named the International Cairo Hotel as a gesture of appreciation for Egypt’s efforts in facilitating the reconciliation between Hamas and Fatah.

Salah Abu Hasira, the head of the Palestinian Committee for Restaurants, Hotels and Touristic Services in Gaza, told Al-Monitor that the committee has registered 108 touristic facilities in Gaza, including 24 hotels, 71 restaurants, three zoos, four amusement parks and six resorts. "Around 6,000 people currently work in [Gaza's] tourism sector," he said, "and if all facilities are operated, they can reach 12,000-15,000 employees. A sum of $150 million has been invested in touristic projects in Gaza.”

​Ahmad al-Jadba, a representative of the Ministry of Economy in Gaza, told Al-Aqsa Voice on Feb. 28 that “tourism accounts for 4% of Gaza’s gross domestic product.” Jadba said that Israel's three wars on Gaza, in 2008, 2012 and 2014, led to "huge economic losses in touristic facilities because the war destroyed a large part of them. For instance, the 2014 war caused direct damage worth $6 million and indirect damage worth $4 million. The owners of facilities did not receive any compensation. The Israeli blockade and the closing of the Rafah and Erez crossings hampered the influx of tourists and foreign delegations that normally push tourism forward by renting hotels and touristic resorts. The Palestinian Authority (PA) sanctions against the Gaza Strip, including forcing PA employees who work in the public sector to retire early, undermined the purchasing power of citizens and indirectly dealt a blow to the role of internal tourism due to other priorities to ensure a living.”

Despite all the obstacles facing the tourism sector, several international and high-caliber touristic facilities have opened in the Gaza Strip in the past few years, including the Blue Beach Resort, which boasts European-like design.

Rola Maayah, the minister of tourism and antiquities in the national consensus government, told Al-Monitor, “Tourism in Gaza is a top priority, and the national consensus government is interested in reviving it quickly. During our last visit to Gaza Oct. 3, we met with delegates of touristic committees to discuss ways to develop and bolster the sector. We talked about the problems and impediments during the years of division, and we vowed to solve the problems soon through a series of plans and programs that the ministry will implement in Gaza in the coming phase.”

The ministry plans to address the problems of the tourism sector in Gaza and settle the issue of compensation for touristic facilities that were affected by the Israeli wars. She said the ministry is also preparing a media campaign to "introduce the world to Gaza’s touristic sites." She also plans to encourage domestic tourism by proposing tours of the West Bank and Gaza Strip.

Rizk al-Helou, the director of the Department of Tourism in Gaza's Ministry of Tourism and Antiquities, told Al-Monitor, “The climate and geography of the Gaza Strip have made it suitable for investments in the economic sector. Gaza overlooks the Mediterranean Sea, and [its coast] extends along 36 kilometers [22 miles]. It has warm and moderate weather all year long. These factors encouraged investors and businessmen to invest in tourism. With the Israeli blockade on Gaza and the closing of the border crossings, which prevented tourists from entering, internal tourism prospered to make up for foreign tourism. Appetite for investments in local restaurants and chalets increased also.”

Mazen Salah, the manager of Palmyra restaurant in Gaza City, told Al-Monitor, “The owners of touristic facilities in Gaza are closely following up on the reconciliation developments to solve the problems of the sector, which have accumulated during the years of division. For example, the government dropped the tourism debts and exempted touristic facilities from paying taxes and licensing fees imposed on Dec. 27, 2015, and reaching $1,000. The customs’ tariffs were also reduced to decrease the operational expenses to a minimum.”

A key manager in the Palestinian Committee for Restaurants, Hotels and Touristic Services in Gaza told Al-Monitor on condition of anonymity, “The committee has not held any meetings yet with the minister of tourism in the consensus government. However, the committee met with Abu Srour. Maayah, for her part, toured some of the touristic facilities in Gaza where she was told about the needs of the sector. She promised to solve their problems as soon as possible after the pending issues are settled.”

Perhaps the coming days will reveal whether the reconciliation will help revive Gaza's tourism sector, which has paid the price of division and the Israeli blockade.