Gaza's restaurant sector is thriving as residents flock to one of the few available diversions. 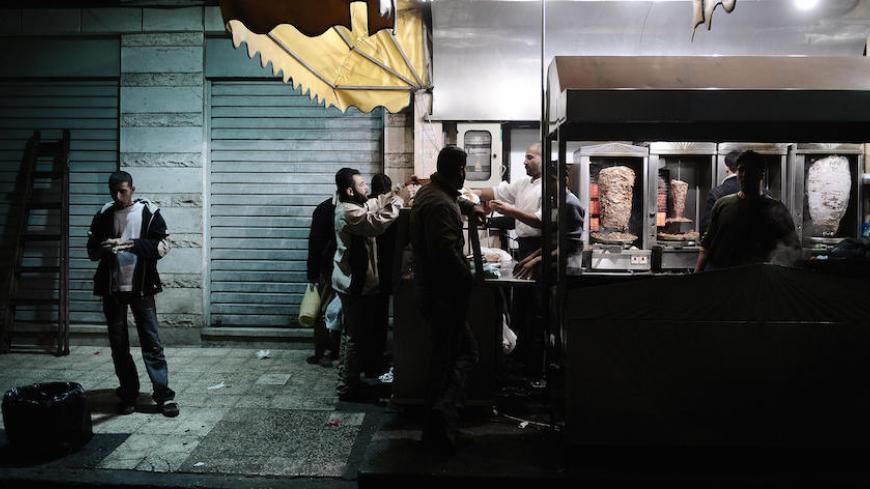 GAZA CITY, Gaza Strip — Omar al-Shawa owns and runs a restaurant in Gaza City that serves snacks, sandwiches and shisha. After establishing the restaurant in 2014, Shawa has worked hard to promote it as it competes with dozens of restaurants scattered throughout the Gaza Strip.

Shawa, who has worked as a manager in many restaurants, said that food investments are currently the only viable and profitable endeavors in Gaza. “One cannot live without food, and restaurants rarely make any losses. Despite the many difficulties that we face in our business, including the continuous power cuts and the repeated wars that stop our work for long periods, our business remains very good and profitable,” he said.

Shawa said that his restaurant is visited by many customers from all classes because he offers low prices that everyone can afford. “We rely on the high turnout of people of all classes, and our prices, which range from 7 to 12 shekels [from $1.80 to $3], play an important role in this turnout. Add to this the increased demand in the summer months,” he said.

Many new restaurants, either popular or high-end, are established in the Gaza Strip on a yearly basis. Investors are lured by the high demand in Gaza.

Salah Abu Hasira, chairman of Gaza's Hotels and Tourist Restaurants Commission, said that investment in the tourism sector has become one of Gaza's most important economic sectors, generating decent incomes. Abu Hasira told Al-Monitor that the strong interest shown by investors in the Gaza Strip and residents' interest in the food business have led to the fast growth of this field.

Despite the increase in individuals establishing restaurants, the government offers no assistance in this regard with tax exemptions or obtaining licenses, according to Abu Hasira.

“The income is currently unattractive because of the economic situation and the Israeli siege imposed on Gaza. The absence of staff salaries was not encouraging. However, businessmen in Gaza are very ambitious and patient. Large restaurants and hotels, for instance, lease their big halls and wedding halls to large organizations where they hold their meetings. On the other hand, popular restaurants that offer popular and light meals rely on low price meals and sandwiches to attract customers. Low prices are the best options for Gazans in light of the difficult economic conditions. The tourism sector is thus trying to find new sources of income despite the bad economic situation,” he added.

Abu Hasira said that domestic tourism in the Gaza Strip revives popular restaurants, which explains the opening of restaurants that cater to low- and medium-income groups.

Economic expert Maher al-Tabbah said that the high rate of investment in restaurants and the popularity of the restaurants among residents can be explained by the Arab culture of consumption. “Arab people consume a lot, which explains the profits made in the food field, not to mention that 60% of the economy depends on services,” he said.

Tabbah told Al-Monitor that the growth in the food sector is due to the Israeli blockade, which has deprived people of any type of entertainment. He noted that residents have no choice but to go to restaurants.

“It is a type of domestic tourism alongside the few tourist resorts, all of which attract people who used to travel constantly but can no longer opt for ​​foreign tourism. This has contributed to the development of restaurants,” he said.

He said that the likelihood of a restaurant failing is very low, and many new restaurants have recently succeeded and expanded.

“Restaurants in Gaza were not affected by the wars, except for some that have been directly targeted. As for the periods before and after the war, restaurants were not impacted by the Israeli siege as they rely on the tourism of local citizens, who were banned from traveling due to the closing of the border crossings. They [have no choice] but to go to restaurants, which led to the expansion of this industry and the opening of many new branches,” Tabbah said.