Restaurants on the rise in Gaza

The number of restaurants are rapidly increasing in the Gaza Strip, as this industry is regarded as a safe investment in light of the siege and the ban on imports. 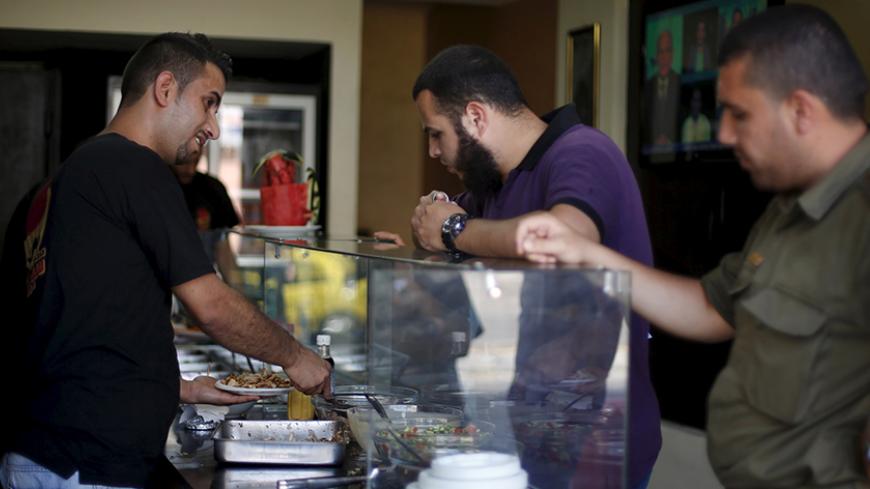 A Palestinian man prepares food for customers at a restaurant in Gaza City, June 14, 2015. - REUTERS/Mohammed Salem

GAZA CITY, Gaza Strip — The increasing number of new restaurants is apparent in the streets of Gaza City. At a time when political and economic conditions have led to a scarcity of investment opportunities, the restaurant industry seems to have become a new opportunity for investors in the Gaza Strip.

Al-Monitor noticed, during a tour of various restaurants in Gaza City, how they have reached a professional level of customer service. Rizk al-Helou, the director of the Department of Tourism at the Palestinian Ministry of Tourism, told Al-Monitor in this regard, “When foreigners visit the Gaza Strip, they are surprised by the modern and sophisticated entertainment venues, restaurants and cafes, and by the service provided to customers. There are many success stories and it is considered a great breakthrough in this industry.”

The scene looks unfamiliar in a city whose name is linked to war and siege. Compared with other countries, restaurants have only recently proliferated in Gaza. Restaurant owners have little to no experience in this industry, and thus those investing in this sector have relied on people with experience in operating and managing restaurants. Yet despite all this, many people are frequenting these restaurants.

Abed Adel Ghoneim, the owner of a Thai restaurant in Gaza City, told Al-Monitor, “The idea to open this restaurant came in light of the difficult political and economic situation in Gaza as a result of the closure of crossings and the unjust siege. Importing became difficult since the crossings are constantly being closed, and one cannot risk investing [in a project] in light of the [ban] on imports and the unstable economic situation.”

Ghoneim said, “I have had several experiences in investment projects such as in the clothing, accessory and power tools industries, but they failed because of the [closure of the] crossings. I suffered a great loss.”

Mazen Salah Abdo, the owner of Palmyra Restaurant, which opened its doors in Gaza City 22 years ago, told Al-Monitor, “The risk in investing in the restaurant business may be smaller compared to investments in other industries, as the import and export of some products are governed by the volatile economic conditions in the Gaza Strip and the crossings — which are often closed due to the political situation in Gaza that is dependent on the occupation’s import and export policies. Many goods are often banned from entering Gaza, often resulting in great losses for traders.”

In recent years, and especially since the advent of the Palestinian Authority, restaurants have increased in the streets of Gaza City. In this regard, the head of public relations for the Gaza municipality, Hatem al-Sheikh Khalil, told Al-Monitor, “Since the beginning of 2015, the municipality has given licenses to 195 new restaurants, while 73 restaurants are waiting to be licensed. The number of restaurants currently registered in Gaza amounts to 220, while another 200 aren't registered in accordance with the municipality’s regulations.”

In regard to the procedure to obtain a restaurant license, Khalil said, “[An investor] has to submit an application to the municipality and choose a convenient place with street parking. In addition, he [the investor] should provide the approvals of concerned authorities, such as the Ministry of Health, as the investor commits to the food safety conditions; and the Interior Ministry, which requires the names of employees at the new restaurant in order to carry out security checks and ensure they are suitable for the job; as well as the Ministry of Economy that determines the number of restaurants and their operating mechanisms.”

During a tour inside the popular Castillo Restaurant that opened in Gaza City on April 12, 2014, Walaa Abu Shawish told Al-Monitor, “This restaurant has just opened and its reputation has already spread among people as many are talking about it. This is why I was curious to visit. I am fascinated by the design, the calm and beautiful atmosphere, how delicious the food is and how experienced the staff is in presenting the food and the great respect they show in dealing with customers.”

Khaled Awad, with whom Al-Monitor met at Mazaj Restaurant in Gaza City, said, “The place is amazing. The design is great, the atmosphere is calm and quiet, the smell of food from the kitchen is delicious and so is the taste. The staff gives a lot of attention to the customers and accepts criticism. This is why people keep coming back to this restaurant, where prices are somewhat expensive compared to other restaurants. However, the service and quality of food make up for it.”

The chairman of Gaza's Hotels and Tourist Restaurants Commission, Salah Abu Hasira, told Al-Monitor, “The majority of investors who invest in restaurants are not familiar with the nature of the local market, which suffers from oversupply and lack of demand.”

He said, “The closure of the crossings and the lack of freedom of movement has encouraged investors to turn to consumer projects that are limited to providing services locally and do not rely on the crossings.”

Abu Hasira added, “This type of investment is inefficient and nonprofitable. The local market cannot absorb such a large number of restaurants, and other problems emerge such as high taxes, financial claims and municipal service fees as well as the employees’ high wages. This has led to the closure of 113 restaurants in Gaza in the past few years."

Maher al-Tabbah, an economist and the director of public relations and media at the Chamber of Commerce in Gaza, noted in an interview with Erem News website on May 12 that the consumer culture plays an important role in encouraging investors to open restaurants in hopes of attracting many customers.

Tabbah said that Arabs in general are big customers, which has allowed investors to make profits in the food industry; the service sector in Gaza accounts for 60% of the gross domestic product. He added that the Gazans’ visits to restaurants is a form of domestic tourism in light of the suffocating siege.