Despite cafes opening, Gazans still reluctant to go out

Gaza restaurants are reopening their doors weeks after the lockdown, amid a low turnout of citizens who are still afraid of the coronavirus. 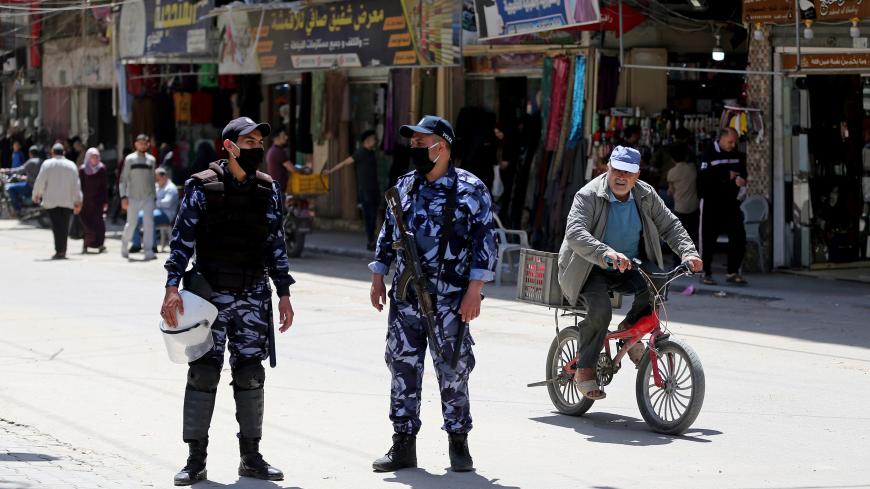 Palestinian policemen loyal to Hamas stand guard in a street amid concerns about the spread of the coronavirus disease (COVID-19), in the southern Gaza Strip, April 23, 2020. - REUTERS/Ibraheem Abu Mustafa

GAZA CITY, Gaza Strip — The Ministry of National Economy in the Gaza Strip allowed on April 27 restaurants and cafes to reopen. This comes as part of the government measures to ease restrictions previously imposed to prevent the spread of the coronavirus in the enclave.

The Gaza Strip is still maintaining a low number of cases, as the Ministry of Health recorded 17 infections since March 21. As of the end of April, 12 individuals had recovered and seven remain under medical observation in Gaza hospitals. No confirmed cases have been registered since April 23.

On April 28, Abdel Nasser Sobh, director of the World Health Organization office in Gaza, warned that it is only a matter of time for the coronavirus to spread in Gaza.

As a precautionary measure, the crisis cell to confront the pandemic formed by Hamas, which controls the Gaza Strip, in cooperation with government agencies, issued a decision to close wedding halls, restaurants and cafes on March 21. The measures have forced business owners to lay off up to 5,000 workers and incur huge losses.

The government agencies in Gaza have yet to issue inclusive statistics on the size of the losses inflicted on the Gazan economy due to the coronavirus pandemic. “We do not have an accurate figure on the size of economic losses,” Abdel Fattah Abu Moussa, spokesman for the Ministry of National Economy in Gaza, told Al-Monitor. “In cooperation with official and trade union organizations we are still assessing these losses and we will announce them in the future.”

Abu Moussa said that the decision to open restaurants and cafes came in light of the decline in the number of cases in the Gaza Strip. He explained that the ministry required the owners of those cafes and restaurants to take strict preventive measures when receiving customers.

The tourism and hotel sector is one of the most affected by the pandemic in the Gaza Strip. Gaza Hotels and Tourist Restaurants Commission chairman Salah Abu Hasira told Al-Monitor that 500 tourist and hotel establishments were closed due to the pandemic, incurring losses exceeding $10 million from March 21 to April 26.

He said around 5,000 workers were laid off from those establishments, which deprived them of their monthly salaries. “Most of these establishments will not be reemploying all their workers after reopening their doors,” he added. “People still fear the spread of the virus and are reluctant to visit restaurants and cafes, even if they apply safety measures.”

Meanwhile, the Ministry of Economy published a list of the protective conditions and measures to be applied by the owners of restaurants and cafes before and during the reception of customers. This includes requiring workers to wear masks and gloves, keeping a distance of no less than 2½ meters (8 feet) between customers and disinfecting door handles and so on.

The public relations and media officer at Thailandy Restaurant in Gaza City, Rami Abu Shanab, told Al-Monitor that they have had a good turnout compared to other restaurants since the reopening. They have taken the necessary preventive measures to ensure the safety of customers.

“During the lockdown period, we sold takeaway food. But our losses during more than a month of closure amounted to 70%, as the total of our daily earnings during the state of emergency period reached $1,000 compared to $4,500 before this period,” he said.

The manager of Al-Dar Restaurant in Gaza City, Moataz al-Mazraawi, told Al-Monitor, “Two days after the decision to reopen restaurants, customer turnout remains weak amid the prevailing fear of infection.” He noted that his restaurant lost 155,000 Israeli shekels ($44,000) due to the closure over the course of five weeks.

Mazraawi said that a large segment of customers ask for takeaway meals, noting that only 18 out of his 35 workers were reemployed.

Meanwhile, the Ministry of Labor in the Gaza Strip, and in cooperation with the Palestinian General Federation of Trade Unions, announced April 27 the start of electronic registration for Gaza workers to benefit from a program aimed to support and assist workers affected by the state of emergency due to the coronavirus. This comes after the ministry distributed $1 million to 10,000 workers in mid-April.

Maher Tabbaa, director of public relations and media at the Gaza Chamber of Commerce and Industry, expects the tourism and hotel sectors to keep incurring heavy losses. “This is all the more true in light of some restrictions imposed by the Ministry of Economy on some activities, such as closing wedding halls and banning hookahs in restaurants and cafes. Many restaurants and cafes are frequented by young people who just smoke a hookah and have a drink,” he told Al-Monitor.

Tabbaa noted that 45,000 workers in the Gaza Strip have lost their jobs since the lockdown measures. “The financial assistance to the unemployed workers in Gaza is trivial,” he added. “Many breadwinners are unable to provide daily food for their families.”

The fear of infection and the discovery of new cases still haunt Gazans, who are staying away from public places and restaurants. The besieged enclave has modest health capabilities, as hospitals suffer a shortage of ventilators and beds in intensive care units