Due to measures taken to tackle COVID-19, the Gaza Strip economy is at a virtual standstill, worsening unemployment and poverty. 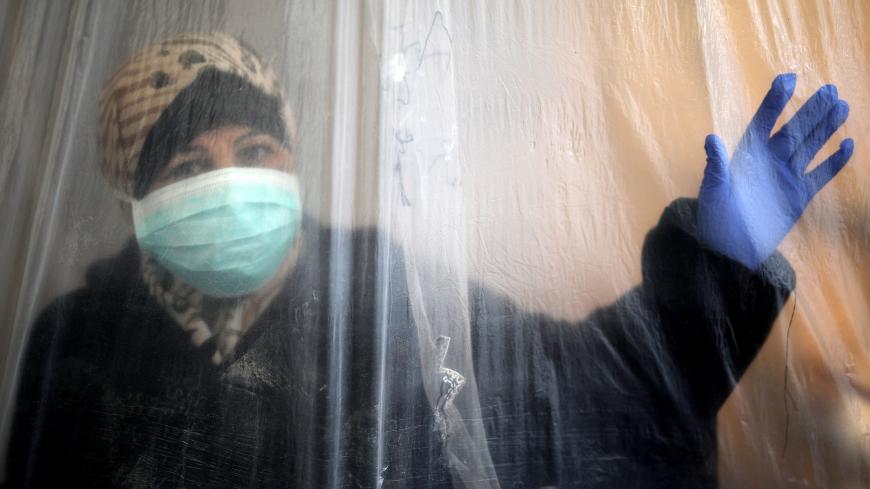 A woman wearing a protective mask and glove looks out through a nylon sheet covering part of her house during the novel coronavirus pandemic crisis, Beit Lahiya, Gaza, April 11, 2020. - Majdi Fathi/NurPhoto via Getty Images

GAZA CITY, Gaza Strip — Yousef Abu Muammar can no longer provide for his family of five. He had to stop working at a Gaza City beach cafe because of restrictions the Ministry of Interior implemented March 22, including closing wedding halls, cafes, restaurants and markets, to contain the spread of the coronavirus.

Hamas-run local authorities in Gaza have been gradually imposing preventive measures after two people who had come through the Rafah border crossing with Egypt tested positive for the virus. The total number of infections in Gaza stood at 13 as of April 15. The new measures have increased unemployment and affected all economic movements, according to observers.

Abu Muammar told Al-Monitor, “I have had no source of income since the cafe I worked at closed two weeks ago.”

Hundreds of workers in Gaza have lost their jobs as a result of the restrictions. “I used to earn about $30 a day. I am trying to provide for my family’s urgent needs with a small amount I had saved up, but I am running out of money and soon I will be unable to feed my children,” he added.

“I just hope the coronavirus will disappear so life can return to normal. The Gaza Strip is now suffering under both the pandemic and the Israeli blockade,” Abu Muammar noted.

The shore of the Gaza Strip sea, filled with wedding halls, cafes, restaurants and hotels that used to be packed with visitors, is now almost empty amid the lockdown.

“Gaza’s tourism sector has been completely paralyzed," Gaza Hotels and Tourist Restaurants Commission chairman Salah Abu Hasira told Al-Monitor. “About 5,000 workers in 25 tourist establishments in the Gaza Strip — who support about 25,000 people — are now unemployed without any other source of income. Unemployment and poverty rates have thus increased,” said Abu Hasira.

He added, “The summer season is approaching, and that's when the tourism sector in Gaza is usually active. However, the lockdown will deal a major blow to the sector, especially since it was already suffering under a recession due to the ongoing Israeli siege since [2007].”

In the same context, Warif Qassem, a Syrian chef at one of the most prestigious restaurants in Gaza, told Al-Monitor, “The coronavirus has had a tragic impact on all countries of the world that have developed medical systems and strong economies. Just imagine how much the densely populated, besieged Gaza Strip, with high unemployment and poverty rates, is affected."

He added, “When the restaurant I worked for closed March 21 following the Ministry of Interior’s decision, around 30 workers lost their livelihoods, and I am one of them. The pandemic had a major negative impact on all workers in the tourism sector in Gaza, especially those who get paid by the day.”

The restaurant’s owner also has been affected. "He has to pay taxes to the government and has many other financial obligations," Qassem said.

The transportation sector has become almost nonexistent. Many drivers have lost their livelihoods, including Mohammed Bayan, a taxi driver who said he can no longer provide for his family of six. Citizens have nowhere to go since schools, universities, and many private and governmental institutions are closed.

Bayan told Al-Monitor, “The situation is similar to the days of war: No one is leaving their home, and I can no longer buy fuel to drive around looking for passengers.”

On Jan. 28, the Geneva-based Euro-Mediterranean Observatory for Human Rights reported that half of the Gaza Strip's population is poor, and four out of every five people receive financial aid.

Meanwhile, Maher al-Tabaa, director of public relations and media for the Gaza Chamber of Commerce and Industry, told Al-Monitor, “About 20,000 workers have lost their jobs amid the coronavirus pandemic in the Gaza Strip.”

Tabaa added, “The pandemic has resulted in a major crisis in Gaza’s economy. … [The businesses] that were considered Gaza’s economic backbone are now closed. Meanwhile, the transportation movement has dropped by 80% since schools and universities were closed.”

Jamal al-Khudari, head of the Popular Committee Against the Siege in the Gaza Strip, told Al-Monitor, “The economic losses in Gaza amounted to $200 million during the month of March. These losses include the economic, industrial, commercial, contracting and tourism sectors. Most work is suspended, and economic stalemate prevails in the Strip, making matters worse for Gaza’s 2 million citizens."

Gazans just hope the pandemic subsides as soon as possible so the economy won't continue to deteriorate and cast a shadow over their lives.