Most people in northeastern Syria seem to be obeying a lockdown imposed by the Kurdish autonomous administration to contain the spread of the coronavirus, but many are wondering how they will survive financially. 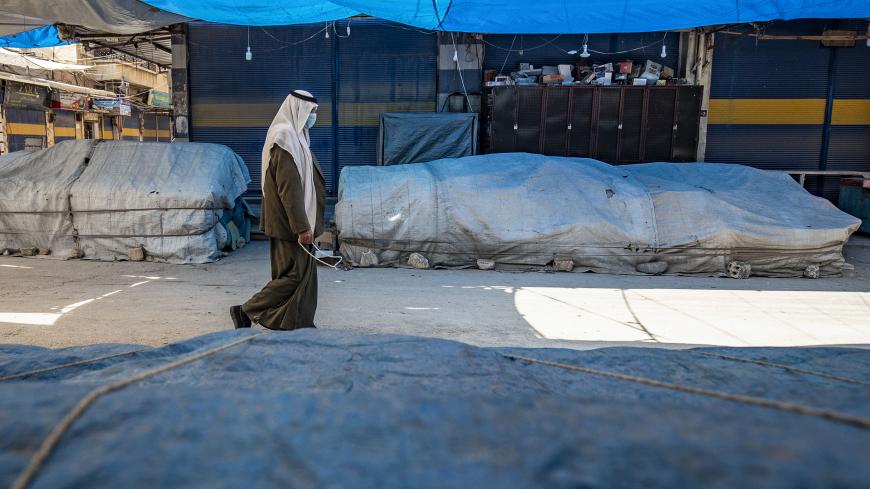 A man wearing a protective mask walks by an empty market in the Kurdish-majority city of Qamishli, Syria, March 23, 2020. - DELIL SOULEIMAN/AFP via Getty Images

Facing a coronavirus pandemic that has invaded most countries of the world, the Kurdish autonomous administration in Syria has imposed a curfew and lockdown throughout its areas of control, as a preventive measure.

Under the lockdown, which began March 23, the administration also closed cafes, restaurants, public places, wedding and mourning halls, and even private medical clinics. Bakeries, grocery stores and pharmacies were excluded from the decision. The curfew was set for 15 days that could be extended if necessary.

Residents appeared to be strictly abiding by the restrictions in many neighborhoods and the main roads in northeastern Syria, especially the entrances to cities and roads leading to markets, according to video footage posted by the North Press Agency.

But clear violations were noted in some neighborhoods Al-Monitor visited, such as Ashouriya, Arbawiya, Bashiriya and Kaddour Beik. Al-Monitor met some children along the way. One of them said, “We aren't afraid of the coronavirus, and we will not wear gloves and masks. Our parents didn't ask us to stay home.” Another added, “We haven't heard that anyone is infected. We will wear gloves and masks when the virus gets here.”

Indeed, Syria had reported 10 cases of the virus that causes COVID-19 and two deaths as of March 31, and none of them were in the autonomous administration area.

On March 23, Al-Monitor spotted a large gathering in southern Qamishli, where people were out for walks. A patrol by the Kurdish security police, known as Asayish, ordered them to go back home. The autonomous administration announced it will arrest anyone violating the curfew.

But a large number of residents rely on a daily salary, which means many must go to work to make ends meet. This is the case of Mahdi, a pseudonym, who told Al-Monitor, “I am from Deir ez-Zor, and I have seven sons there. If I don’t show up to work today, I will not be able to secure their food. The lockdown decision is good but incomplete. We need an alternative to be able to secure our daily needs.”

Al-Monitor phoned journalist Rumman Issa from Hasakah for his take on the situation. “The lockdown — imposed a bit late — is the appropriate measure and helps prevent the spread of the virus,” he said. “During our media coverage, we monitor the residents’ commitment to the home quarantine decision, which is a vital primary preventive measure. We note some repeated violations on a daily basis. Residents go out collectively under the pretext of securing household items. Some neighbors and relatives are exchanging night visits. This pushed the crisis cell [a group formed by the autonomous administration] to combat the virus by issuing a statement urging residents to strictly abide by the lockdown decisions, and to only leave their homes when absolutely necessary.”

Commenting on the situation of daily wage-earners, Issa said, “This segment of the community is the most affected, but the scale of the epidemic is far greater than their loss. In many countries, a monthly amount of money has been allocated for each family to solve this problem. If the lockdown gets tighter, the autonomous administration and the crisis cell ought to secure financial aid for families in need until a solution to the epidemic is found.”

Facing the possibility of a prolonged lockdown, and considering the critical situation of the poor and the increase in public and media pressure, the autonomous administration announced March 29 it would provide some food aid to the poor and needy.

Muhammad Abu Hassan, who sells clothes, praised this step. However, he told Al-Monitor, “We still need money to cover a portion of our expenses, such as paying for bread, electricity, infant formula and medicines for the needy and the sick.”

The lockdown is the only way to avoid a major COVID-19 outbreak, according to Abdul Basit Kuti, an official at the General Administration for Supply and Consumer Protection in al-Jazira, which is a department of the autonomous administration.

“The curfew was accompanied by the closure of many factories and stores, which affected workers and the poor, especially those who work on a daily wage,” Kuti told Al-Monitor. “To prevent merchants and owners of food stores from establishing a monopoly and manipulating prices of various foodstuffs, the department has set prices for foodstuffs. Those who fail to abide by the fixed prices could be subject to the closure of their stores and monetary fines.”

Akram Hussein, an independent Kurdish politician, argues that imposing strict laws to limit the movement of residents and arresting or fining those who violate these procedures, without taking into account the basic needs of residents and their livelihoods, will create a kind of authoritarian administration that controls the way people think and their way of life.

“This does not fall within the scope of preventive measures or containing the spread of the virus. No cases have yet been confirmed in the eastern Euphrates area. The way these measures are imposed is tantamount to tyranny aimed to control people’s habits and behaviors even after the isolation procedures end," Hussein told Al-Monitor.

“No one wants the coronavirus to spread, but people’s livelihoods should be a priority. The prevention procedures and measures must be implemented smoothly and with flexibility so as not to disrupt the basic livelihoods and living requirements.”

Resident Fadwa Murad spoke with Al-Monitor about the curfew and lockdown. “My husband is a taxi driver. We have five children. How will we make ends meet? We have no other source of income. Some of our neighbors give us some food, but for how long? The authorities ask us to stay home, but how will I feed my children? We either die from the coronavirus or from starvation.”

In the past, many groups have helped the poor in the area, but so far, the international community and humanitarian organizations have not addressed the issue of allocating financial aid. In light of this situation, daily wage earners — many of whom are poor and live in slums — are stuck between needing a source of income on the one hand, and fear of the coronavirus pandemic on the other.

Journalist Soulin Mohamed Amin said the conditions of the lockdown need to be clarified. “The curfew is painful for some and costly for workers, craftsmen, professionals and sellers whose sole income depends on their daily work and who have a limited wage," Amin told Al-Monitor.

"For most of the people, this decision serves the public interest and aims to keep them safe. The autonomous management areas have yet to register any confirmed coronavirus cases. But a solution must be found for the daily workers who will not have the ability to provide their daily necessities under the lockdown,” he added.