Beirut in the time of coronavirus outbreak

Beirut has turned into a ghost city as shops and restaurants that remained open during the civil war closed their doors in implementation of a general mobilization decision issued by the government to limit the spread of the coronavirus. 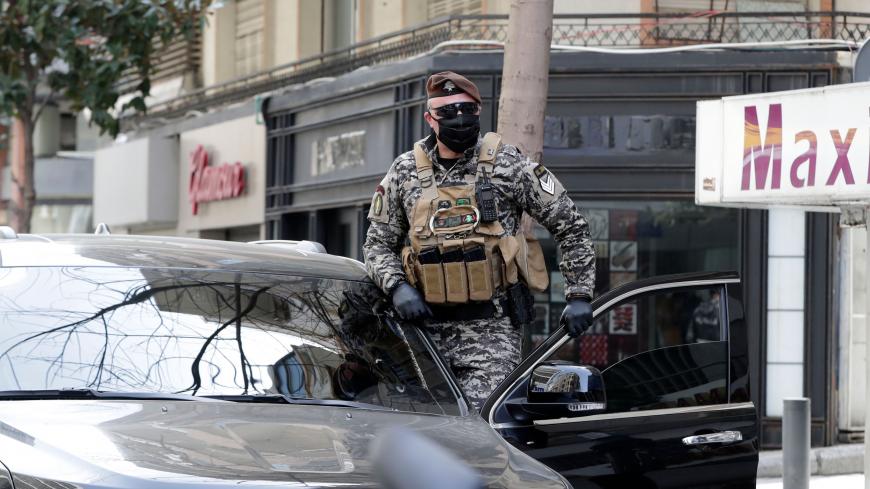 Lebanese state security patrol during a lockdown in a bid to limit the spread of the coronavirus, Beirut, Lebanon, March 25, 2020. - ANWAR AMRO/AFP via Getty Images

BEIRUT — On March 26, the Lebanese cabinet approved the extension of the general mobilization until April 12 as yet another effort to combat the spread of the coronavirus. To limit the spread of the coronavirus in Lebanon, the Lebanese Armed Forces' helicopters hovered March 22 over several areas in Lebanon and called over loudspeakers on all citizens to stay home and only go out in case of emergency.

On the same day, the Lebanese army and Internal Security Forces were deployed in various Lebanese regions in implementation of the government’s decision to ensure citizens’ compliance with the lockdown declared a week earlier.

During a March 21 press conference, Prime Minister Hassan Diab called on the Lebanese to “impose a self-curfew because the state alone cannot cope with the spread of the pandemic.”

Since the announcement of the first coronavirus case — a 45-year-old Lebanese woman who came from the Iranian city of Qom on Feb. 21 — the Lebanese government has taken several precautionary steps and closed nightclubs and cinemas as part of its attempt to prevent people from gathering.

On March 15, the government announced a state of general mobilization until March 29, which has been extended, and said the decision would include shutting down the Beirut airport, seaports and land borders. However, people have failed to abide by the instructions, as gatherings are taking place around the country, something that could explain the high number of new cases recorded during the days of general mobilization.

In response, the government asked citizens to impose a self-curfew and deployed the army and security forces to this end.

Beirut in a time of the coronavirus outbreak is not the same. Streets are almost completely empty, young men no longer sit in coffee shops and vendors have disappeared from the streets. Ambulances are everywhere, and only a small number of people drive around town to get basic foodstuff and run urgent errands.

The streets are calm and everyone is home. Most stores have closed their doors. Only hospitals, pharmacies and grocery stores are open.

The virus that causes COVID-19 has managed to close institutions that did not even close their doors when Beirut was going through its darkest periods. For example, Barbar Restaurant in Hamra Street never closed its doors during the civil war (1975-1990), but it has closed its doors now.

Some say the virus is far more dangerous than the war Lebanon faced. During the war, there were clear combat zones one could avoid, but the enemy we are currently fighting is invisible, and we are unable to protect ourselves from it, hence a different kind of war affecting our daily activities and social relations.

Ziad Majed, a journalist at al-Quds al-Arabi, wrote on his Facebook page, “This time around, the enemy is invisible. There are no contact lines with it. It does not have a face or a name, and we are completely incapable of protecting ourselves from its sniper attacks or bombs. It’s everywhere. We might get into contact with it in an elevator, in front of an ATM machine or as we use our purchases. War with it is comprehensive and it is most probably going to be a long one.”

Albert Abi Azar, a priest and activist in public affairs since 1970, told Al-Monitor, “The civil war took a heavy toll on a lot of people. There was a social crisis, but we had all the elements of a war economy, and most people lived their lives normally as they continued to go to restaurants and buy their needs. Shops were fortified with sandbags to protect people from shrapnel. It is true that electricity and water supply was repeatedly cut off and there was no internet for people to communicate, but social relations were stronger. Neighbors visited each other, and fighting areas were clearly defined, fighters were known. We were careful and we challenged shells because we loved life.

“But today, the enemy we are fighting is invisible and we cannot protect ourselves from it. We have replaced sandbags with disinfectants. We can no longer go out and practice our lives naturally because this would pose a threat to our lives and the lives of others. The internet may have made it easier for us to communicate with the world but it is a double-edged sword because it allowed the spread of misleading information, sowing fear and confusion among communities. We should not undermine the effect of the virus but at the same time we should not cave in to panic. The coronavirus coincided with an economic and monetary crisis plaguing Lebanon, which negatively affected the livelihood of many Lebanese. In other words, there is no room for comparison between the virus and the civil war because our enemy is different.”

There is a difference as well in terms of how people are facing the virus, especially those who are suffering from the country's economic crisis. These include day workers who cannot secure their livelihood from home.

In this regard, a video of a vegetable cart owner going ballistic in Beirut went viral. The man threw his products on the floor after the security forces tried to stop him.

Minister of Social Affairs Ramzi Moucharafieh announced March 22 that “the social assistance that the government started working on a week ago will be distributed within a few days to the needy.”

This assistance aims to help the poorest families, especially individuals who have been forced to stop working and stay home after the spread of the coronavirus.

After the government's delay in providing aid, Lebanese took the initiative to help each other out, launching campaigns to help the needy.

“El Nes La Baada” campaign, which is Arabic for "People Are for One Another," was launched by lawyer and social activist Hassan Bazzi and a group of young people to confront the coronavirus. They are collecting donations to buy food for distribution to the needy.

However, Jad Hajjar, a professor of mathematics and physics at ABCours in Beirut, told Al-Monitor, “The distance-learning experience is difficult and will not be successful because students are accustomed to classrooms.”

“I still don’t know if I would be paid for the period I am spending at home and which we don’t know when it will end. Even though I live in a house that has a garden, I feel my freedom is restricted, and this feeling is very difficult,” he added.

Remarkably, a large number of Beirut residents moved to the mountains, where the risk of infection is lower.

Elie Makhoul left Beirut and moved to his family’s house in the southern town of Rmeish.

“I am a bank employee," he said. "The branch I work at was immediately closed after the general mobilization decision was announced, so I moved to the family’s home in Rmeish to spend the lockdown period that will last until the end of this month. I did not want to stay alone in Beirut. There are no proven cases in my hometown, and the weather is better there.”