How is Lebanon dealing with refugee camps amid coronavirus outbreak?

Since the coronavirus reached Lebanon, there have been growing concerns about the spread of the epidemic inside the country’s overcrowded Palestinian and Syrian refugee camps. 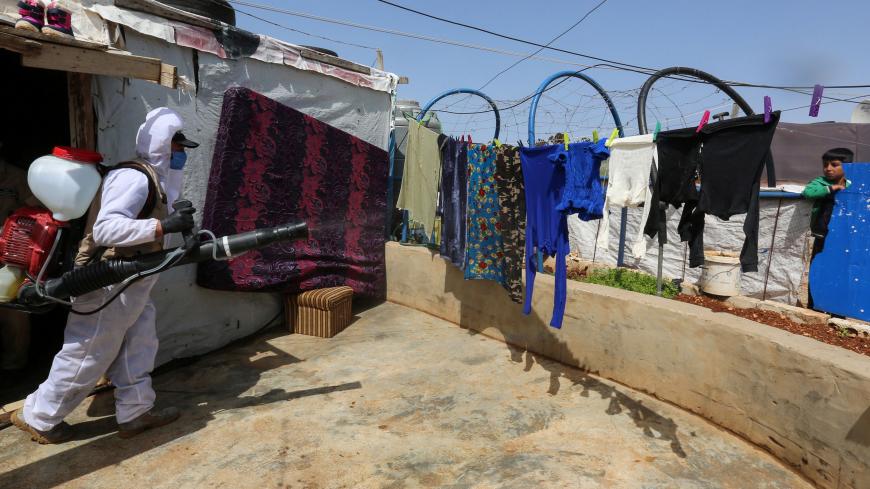 BEIRUT — Ever since the coronavirus landed in Lebanon on Feb. 21, all eyes have been on the country’s refugee camps, where overcrowding and fears of refugee infection are coupled with dire living conditions. Such conditions prevent refugees from buying hand sanitizers, masks and medical gloves, as water shortages turn hand-washing into a luxury refugees cannot afford.

Alaa Abbas, a 24-year-old Syrian refugee living in the Delhamiyeh camp in Lebanon’s Bar Elias region (the Bekaa Valley in eastern Lebanon), told Al-Monitor, “We are afraid the virus will spread in the camps, even though there are no infections yet. We are trying not to leave the tent in order to protect ourselves. The [Lebanese] security forces patrol the camps on a daily basis to make sure no one leaves unless necessary.”

“There is an organization (name unknown) that distributed one bottle of liquid soap to each tent and taught refugees how to protect themselves from the virus, but there are many people who cannot afford sanitizers and cleaning materials because they are not currently working. The assistance (money) we get from the United Nations barely covers our needs for about 15 days. What are we supposed to do during the remaining days of the month?” Abbas asked.

“We have been committed to tent confinement, but no one has provided us with any food rations or cleaning tools,” he added.

The Lebanese government announced on March 15 a general mobilization across the country, including in refugee camps, as part of efforts to contain the spread of the virus. The municipalities where refugee camps are located are coordinating with Lebanese security forces to enforce the decision banning movement unless necessary.

Just like Abbas, a lot of Syrian refugees who were already suffering economically in Lebanon are now struggling to cope with the outbreak of the coronavirus and are deeply worried it will spread in their camps.

About 1.5 million Syrians are estimated to be in Lebanon, living in some 1,700 informal camps — not official refugee camps like the Palestinian ones — according to the United Nations refugee agency, UNHCR.

This comes at a time when Lebanon and the Lebanese are already dealing with an economic and financial crisis, as the Lebanese government strives to obtain foreign and domestic aid for its public health system.

Meanwhile, the Lebanese government is preparing hospitals to receive a greater number of cases.

According to statistics issued April 5 by the National Disaster and Crisis Management Operation Room in the Grand Serail, a room launched by the government to collect and distribute information on the coronavirus pandemic, cases in Lebanon have exceeded 500.

Om Haroun, a Syrian refugee in one of the Bar Elias camps in the Bekaa Valley, told Al-Monitor, “Things haven’t changed much with the coronavirus. Before the coronavirus pandemic, we were not able to make ends meet, so you can imagine how bad things are now.”

In order to stem the spread of the coronavirus, security forces had started carrying out disinfection operations in a number of refugee camps, as they patrol the camps to ensure the implementation of the curfew during the general mobilization period in cooperation with municipalities and the local community.

Asked about hospitals, Khadr Raslan, an adviser to the minister of health, told Al-Monitor, “The Syrian and Palestinian refugees are an integral part of the population in Lebanon, and any resident on Lebanese territory will receive the same treatment.”

“The UNHCR is currently working on and discussing a mechanism with Lebanese Minister of Health Hamad Hassan. This mechanism is to be fully developed within the coming days, and it will include the means to deal with the displaced during the coming period,” Raslan added.

He said “the hospitals selected by the Ministry of Health to receive infected people are still able to absorb the existing cases.”

Lisa Abou Khaled, spokesperson for the UNHCR in Lebanon, told Al-Monitor that (as of the writing of the article) “no COVID-19 cases have been reported among refugees in Lebanon” and the UNHCR has “started early on working with UN agencies on prevention measures and a response plan in the event that the virus reaches the refugee community.”

“Since February 2020, we have started to raise awareness and distribute sanitary materials, and we still are. We have cooperated with WHO, UNICEF and the Lebanese authorities to raise awareness on how to prevent infection through several measures that include frequent hand-washing, house confinement, social distancing and identification of symptoms, and we informed them of a hotline to communicate with the Ministry of Health,” she added.

Abou Khaled indicated that “the UN, including the UNHCR, is working closely with Lebanese authorities to support and expand the existing capabilities in ICUs and hospitals receiving the infected people so that all patients are treated away from any kind of discrimination. This also aims at developing one coordinated response led by the government, and we are all cooperating to this end.”

“We are currently developing quarantine procedures to be carried out as soon as a case is detected in informal refugee camps or collective shelters where refugees live in close proximity to each other and in large numbers. In order not to place pressure on the current limited number of beds in hospitals, we are creating additional capacity and coordinating with the government. The activities of refugees will be included in the government-led national plan, and should a case be identified among refugees, we will be ready to cover the test and treatment costs. We are committed to supporting the refugees, as has always been the case,” Abou Khaled said.

“Since the first stage of the state of emergency resulting from COVID-19 in Lebanon, the UNHCR has been working with the Lebanese government to contain and prevent the spread of the virus among refugees, and there is daily coordination with all relevant ministries, such as the ministries of Interior, Health and Social Affairs,” she added.

Similarly to Syrian camps, Palestinian camps have the same fears as far as the spread of the coronavirus is concerned.

Ahmed al-Hajj, a Palestinian living in El Buss Palestinian refugee camp in Tyre in southern Lebanon, told Al-Monitor, “The camp is disinfected on a daily basis by multiple parties such as the Palestinian factions, the Palestinian Civil Defense and [the Lebanese] Al Shifaa Foundation [that has offered medical and humanitarian services to Palestinian camps since 2008], and people have been taught how to fight the pandemic. Anyone entering and leaving the camps is disinfected.”

“The main problem is a relief rather than a health problem (meaning there is a need for relief and financial aid), as most people have stopped working,” he added.

Representative of Hamas in Lebanon Ahmed Abdel Hadi told Al-Monitor that since the first case was reported in Lebanon in February, all Palestinian parties have deployed efforts and adopted preventive measures in this regard. People are confined to their homes, and there are continuous awareness-raising campaigns.”

“We met with the Lebanese minister of health and agreed that if any cases are detected among refugees in the camps, they would be treated at government hospitals and transferred via the Lebanese Red Cross to the hospitals approved by the Ministry of Health. We are also preparing quarantine sites for people who will need to be quarantined at a later stage,” he added.

“As for food rations and financial support, we were hoping that the United Nations Relief and Works Agency for Palestine Refugees in the Near East (UNRWA) would play its role in helping people, but it did not. However, we received food rations based on individual initiatives,” he added.

The UNRWA is in charge of Palestinian refugees in Lebanon, which are estimated at about 174,000 living in 12 camps spread across the country, according to the most recent statistics conducted by the Lebanese Central Administration of Statistics and the Palestinian Central Bureau of Statistics.