Palestinians in West Bank refugee camps form emergency committees to battle COVID-19, as some say the UN relief agency is not doing enough. 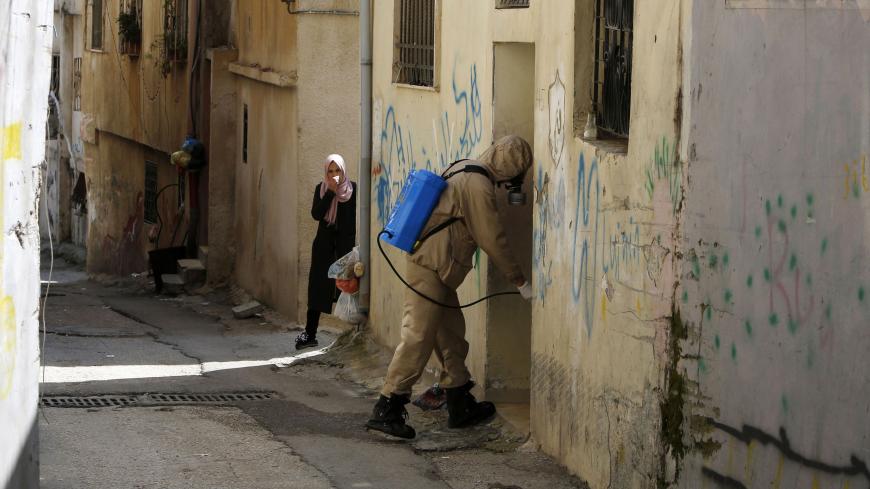 A Palestinian woman covers her face with her scarf as a civil defense worker in protective gear disinfects the streets of the refugee camp of Aida, West Bank, March 16, 2020. - MUSA AL SHAER/AFP via Getty Images

RAMALLAH, West Bank — Soon after a state of emergency was declared in the Palestinian territories March 5, an emergency committee was formed in the Balata camp, the largest Palestinian refugee camp in the West Bank. Young people, leaders and institutions operating in the camp started working to put together an emergency plan to fight the spread of the coronavirus.

Ahmed Zawkan, a member of the emergency committee in Balata and member of the Executive Office of Palestinian Refugees in the West Bank, said that like in the Balata camp, residents of other camps in the West Bank used their available capacities to fight the virus themselves since the United Nations Relief and Works Agency for Palestinian Refugees in the Near East (UNRWA), which is responsible for the camps, was not playing an active role.

The Balata camp committees submitted demands to UNRWA, including extending contracts of contractual cleaners, providing tools and supplies needed to disinfect the camps and extending work hours in clinics that serve refugees in camps and surrounding villages.

Zawkan added, “Ever since the state of emergency was announced, we contacted UNRWA and called for boosting the [capacities] of camps. They promised us to take some measures, but there was a 20-day delay.”

To deal with this slow response, internal committees were formed in each side of the camp to carry out cleaning operations, raise awareness among the inhabitants and coordinate with municipalities to empty garbage bins. The responsiveness of the Refugee Affairs Department of the PLO was helpful, as it expedited budget spending for service committees to move swiftly.

In the Jalazone camp in the central West Bank, the situation was not much different. Mohammad Safi, a member of the camp’s emergency committee, told Al-Monitor that the committee did not even make any demands to UNRWA or bank on its help. The committee was formed seven years ago to bridge the gap in UNRWA’s work after UNRWA’s budget and programs in the West Bank were reduced.

With the declaration of a state of emergency, the committee formed patrols to watch the camp’s entrances and monitor who comes in and goes out, especially people coming from areas infected with the coronavirus. The committee also regularly disinfects the camp, especially its most overcrowded areas.

Safi said, “Relative to the magnitude of this humanitarian pandemic and the fast spread of the virus, UNRWA is moving too slow and is behind in performing the basic measures like disinfection. The agency is supposedly responsible for relief and employment of refugees and compensating for their economic losses at this stage.”

Safi mentioned an increase in unemployment in the camp, reaching 40%. With the current lockdown, all camp inhabitants are unemployed, except for the agency’s employees.

Safi called on UNRWA to handle its responsibilities and rise to the challenge threatening refugees. He said, “Jalazone camp is home to 11,000 refugees who live in a surface area of 236 dunams at most. If one person is infected, a real disaster will occur.”

Gwyn Lewis, director of UNRWA operations in the West Bank, said of the complaints, “Many people want to see clear activities, but the best way to protect refugees, like any other person, is through keeping them at home and working discretely.”

She gave an example of the hotline UNRWA launched to provide social services, reference lists and health consultations to refugees, given the restrictions on movement in the West Bank.

She noted that UNRWA raised awareness about the virus and took concrete measures such as shutting down schools and disinfecting camps.

She added, “We gave instructions that teachers conveyed before schools closed. We also focused on ways to communicate with students to raise their and their families' awareness through emails. We also opened a Facebook page that they can access, and we provided them with educational material through e-learning.”

Lewis said UNRWA supplied 42 health centers under its control in the West Bank, as well as Qalqilya Hospital, with personal protection tools and devices for sorting cases. Medication for chronically ill patients was provided for two full months, and a plan was set to support patients over the phone.

She added that UNRWA and the Palestinian Authority are coordinating closely through the agency’s work with the prime minister’s office, the ministries of health, education and higher education and local governance, councils of joint services and the Refugee Affairs Department, after the Ministry of Health was tasked with following up on the coronavirus status among Palestinians, including refugees. UNRWA offered ventilators to the Ministry of Health to help it in its task, she added.

Louis said that these measures are being applied in all 19 camps in the West Bank, and there are similar measures in the Gaza Strip, knowing that it has bigger needs due to its high population density.

However, Ahmad Hanoun, director general of the PLO’s Refugee Affairs Department, said these measures are not enough, and that the effort was falling short due to the tough financial crisis UNRWA is facing.

Hanoun told Al-Monitor that UNRWA was not ready for the crisis because of its own internal issues and financial problems, including the appointment of a new commissioner general. He said, “We asked UNRWA to make swift international calls for collecting money to face the coronavirus, but so far, we have not received any funds to fulfill the essential needs.”

Hanoun said international intervention to provide funds to UNRWA is now needed, in addition to food aid baskets for camps in the Palestinian territories, especially since the Ministry of Health is now tasked with dealing with the coronavirus and is responsible now for treating patients.

On March 20, UNRWA said it urgently needs $14 million to deal with the implications of COVID-19 in 58 Palestinian refugee camps in the five areas of operation of the agency, and to offer relief to millions of refugees living outside the camps.