The PA’s crackdown on West Bank refugee camps and withholding of aid is adding to the marginalization of the youth. 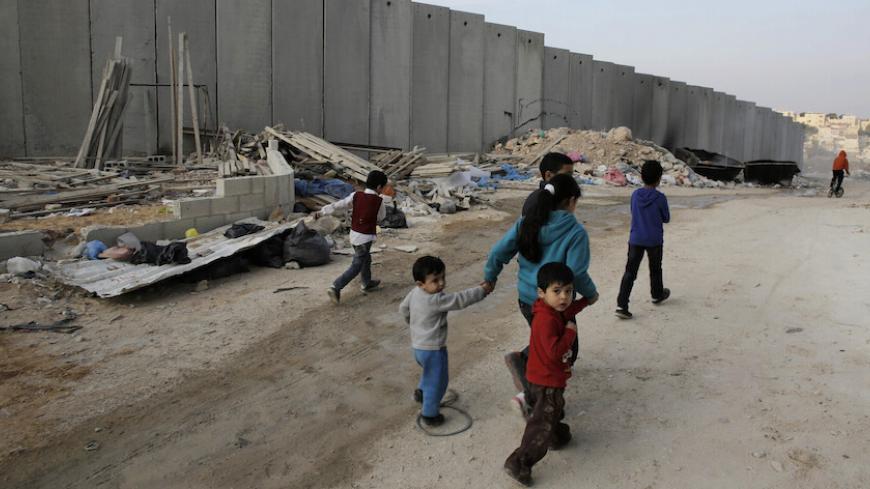 Palestinian children walk past garbage discarded near a section of the controversial Israeli barrier, in Shufat refugee camp in the West Bank near Jerusalem, Nov. 21, 2013. - REUTERS/Ammar Awad

RAMALLAH, West Bank — In the Balata refugee camp in east Nablus, in the northern West Bank, Umm Hossam and her family live in dire conditions in light of the grinding poverty and high unemployment rate that plagues the camp, which is one of the largest in the West Bank.

The Palestinian Authority (PA) security apparatuses have been tracking down the camp’s young men, some of whom are now detained under the pretext of being drug dealers or car thieves.

Umm Hossam said that her husband, a lieutenant colonel with the PA’s General Intelligence Service, took their three sons to the intelligence services a month ago, after being blackmailed and threatened by his employer that he would lose his job if he refrained from doing so.

Umm Hossam’s sons were wanted by the PA for possessing weapons that were not handed over to the Palestinian security agency during its last security sweep in the Balata camp in early February. “They are not the outlaws or drug dealers that the security apparatus is claiming they are,” she said.

The security services have been pursuing the camps’ residents for about a year and a half through organized campaigns, the first of which was carried out in Jenin refugee camp in October 2013. Unit 101 of the Palestinian security service raided the camp, but failed to achieve its objectives as clashes broke out between the unit and the camp’s residents. The campaign has been ongoing and has targeted the refugee camps of Dheisheh, Amari and Jalazone, and most recently Balata.

“My sons were among those who stood up to the occupation forces during the repeated incursions of the camp. They have been arrested for years and [every time] they were released they had big hopes and expectations to live a life fit for those who struggle and fight for [Palestine]. However, they are shocked by the harsh reality,” Umm Hossam told Al-Monitor.

“They cannot find any job opportunities. UNRWA cut down its budget in the camp and canceled its employment program, which was for many of the camp’s youth [an opportunity] including my sons. They are turned down for every PA security position or government post they apply for because they are from the camp,” she said.

UNRWA used to run programs for the unemployed and the youth in the camps. It also provided financial aid to the unemployed, which explains why the camps’ refugees resorted to UNRWA instead of the PA, before the agency cut down its refugee camps’ budget.

This situation is not limited to the Balata camp only, which is home to 25,000 refugees. It affects 907,200 refugees in 21 West Bank camps, out of the roughly 5.4 million Palestinian refugees registered with UNRWA.

Jihad Tamleih, a member of the Palestinian Legislative Council and member of the People’s Committee in Amari refugee camp in Ramallah in the central West Bank, told Al-Monitor: “The people of the camps are clearly being marginalized. The situation has become a ticking bomb that could explode at any time.”

Tamleih said that a systematic marginalization and attempts to escalate the situation is taking place inside the camps. “They [the PA] want to eliminate the refugee camps in light of the critical political situation,” he said.

Official figures by the Palestinian Central Bureau of Statistics show that unemployment and destitution greatly affects live in the camps. The refugee camps are poorer compared to the rest of the community: 35.4% of the camps’ residents live in poverty compared to 22.5% in other communities. In 2013, the unemployment rate reached 28.3% among refugees, compared to 20.1% among non-refugees.

In February, Umm Hossam’s sons and others in the Balata refugee camp rebelled and faced the security forces with weapons to stop them from raiding the camp. The camp’s residents have been refusing to hand over their weapons to the PA, in accordance with the security coordination between the PA and Israel.

Mahmoud al-Saadi, one of the leaders of Islamic Jihad based in Jenin camp, told Al-Monitor: “Both Israel and the PA are targeting the refugee camps. The PA is going after residents of the camps as part of the security coordination with the occupation forces.”

Saadi lost more than 15 members of his family in the fighting and other family members were arrested. This did not stop the PA from tracking him down and arrest him on more than an occasion.

“The PA is trying to turn the camps into hotbeds of drug and arms dealers so that it has a reason to crack down on them and arrest the resistance fighters in favor of security coordination,” Saadi said.

Magid Ghanam, an activist in Jalazone camp, agrees with Saadi. He said there are efforts by the PA to turn the camps into hotbeds of crime, something it is doing in coordination with the Israeli forces.

Ghanam told Al-Monitor: “Refugees are the same [as those outside the camps] in the eyes of the PA, despite their humanitarian needs. They owe taxes and have responsibilities and duties like any other citizen.”

Jamal Lafi, the chairman of the Executive Office of Refugees in the West Bank, stressed the systematic marginalization of the camps, and said that the PA, particularly the security apparatus, are seeking to discredit the camps.

“The PA is not aware of the exact situation in the camps, and thus it fails to deal with them effectively. The camps face their own challenges that are different from those of cities and villages,” Lafi told Al-Monitor.

“The security services are trying to find excuses to storm into the refugee camps and arrest residents, who are accused of being drug dealers. This is why we believe there is a plan to target them, tame them or even distort their history and image,” he added.

According to Lafi, despite the extensive dialogue sessions between representatives of the camps on the one hand and the PA and security services on the other, to find solutions to the crisis, the crisis is renewed every now and then. He said that dialogue falls on deaf ears.

“We asked for a central and regulatory dialogue to find a solution to the situation in the camps. However, negotiations are being held between individuals who discard certain issues and thus we find ourselves at a stalemate,” Lafi said.

Lafi rejected the justification on the part of the PA of not providing any aid to the refugee camps under the pretext that it does not want to infringe on UNRWA’s responsibilities, while it knows UNRWA has reduced a lot of its basic services because of a decrease in its budgets.

“This claim evades reality. The refugee camps are part of Palestinian society and they have the right to benefit,” he said.

Lafi also said that the PA’s allocations for the camps are always late to be disbursed, noting that camps were not part of the PA’s strategic development plan for 2014-16.

Lafi believes that all concerned parties ought to take the situation of the refugee camps into consideration, or it could escalate.

Despite all the PA’s efforts to marginalize the camps, the refugee camps will remain a difficult to control issue for the PA and Israel. The only solution to the problems of the camps’ residents is the right to return from where they were uprooted.

Ghanam said the refugees' demands on the PA are clear: the refugees need to be represented on the international and local level and the oppression campaigns against the camps need to stop.