In the aftermath of a security sweep, Islamic Jihad leaders in the West Bank say the Palestinian Authority is working with Israel to crack down on its activities in Jenin. 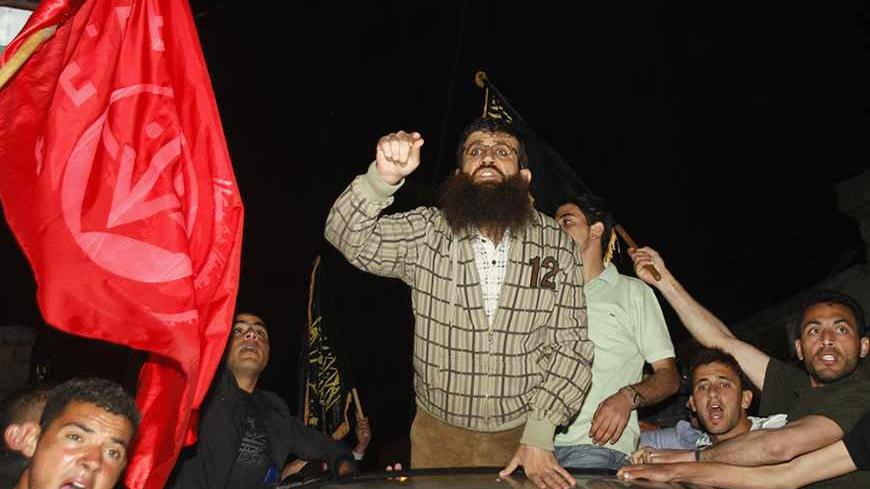 Khader Adnan, a member of Islamic Jihad, stands in a vehicle upon his arrival home after his release from an Israeli prison, Arabe, near Jenin, April 17, 2012. - REUTERS/Abed Omar Qusini

The arrest of the two men came just hours after Palestinian security forces had failed to detain them. During the same raid, the Israeli forces also failed to detain the most prominent wanted Islamic Jihad member, Sheikh Bassam al-Saadi, an influential Islamic Jihad leader who is currently being pursued by Israeli forces. Bassam, who is the brother of Ghassan and the father of Suhaib, was not present in any of the family's homes in the camp at dawn on Nov. 25.

The attempt by the Palestinian security forces to arrest Ghassan and Suhaib came within the framework of the crackdown that security forces announced in the Jenin camp on Oct. 2, 2013.

"On Monday evening, members of a special force from the Palestinian security apparatus raided the Saadi family's homes, searching for Ghassan and Suhaib, but they did not find them. After about six hours, a large force from the Israeli army stormed the family's homes and detained them," Rabie al-Saadi, Ghassan's brother, told Al-Monitor.

Yet Bassam al-Saadi told Al-Monitor, "Ghassan, Suhaib and another [Islamic Jihad] member — Mahmoud al-Saadi — are being pursued by the Palestinian security forces only because of their political affiliation to Islamic Jihad."

Islamic Jihad's media office in the Jenin governorate accused "Palestinian Authority [PA] security forces of coordinating with the Israeli authorities to arrest Bassam al-Saadi, one of the movement's leaders and a national symbol in the West Bank, during the same raid."

Al-Monitor had to coordinate with one of Bassam's brothers to arrange a meeting with the leader, as he does not carry a mobile phone or appear in public for fear of arrest or assassination by Israeli forces. Bassam al-Saadi shared that the Palestinian security forces raided his home and the home of other Islamic Jihad members during the first day of the security crackdown.

While Maj. Gen. Dweikat denied "any targeting or arrests based on political affiliation," the commissioner-general of the Independent Commission for Human Rights — which operates as an ombuds office — said in a report on the crackdown, "We see between the lines that there could also be political reasons" for the arrests.

Although Jamal Huwail, a former prisoner who is now a Fatah deputy in the Palestinian Legislative Council, denied that the crackdown targeted Islamic Jihad, he did note that "Given the importance of a figure such as Bassam al-Saadi, the security forces should deal with him in a different way. There has been some floundering concerning the matter. The security forces first announced that Sheikh Saadi was wanted by them, then denied this claim. They then came back and said that his son was wanted, because they needed to justify the raid on his home."

"Targeting of Islamic Jihad operatives is occurring in all parts of the West Bank through summons, arrests and harassment. But things are different in the Jenin camp. Every time the occupation forces carry out a raid in the camp, it only results in clashes with the military. This disturbs the PA, which alone has kept its grip on the camps for the past six years, and [during this period] there have not been any armed clashes with the occupation," said Bassam al-Saadi.

Yet Saadi, who was detained for 12 years and whose wife and son are prisoners and two other sons have been killed, added, "Israel considers the Jenin camp the key to war and peace. They believe it is an indicator of the pulse of the West Bank."

This year, the Jenin camp has witnessed multiple armed clashes with Israeli forces, which constantly raid the camp. The most prominent raid occurred on Aug. 20, 2013, when a large force raided the camp to arrest Bassam al-Saadi. The raid ended in armed clashes with residents that led to the deaths of two young men, Majdi al-Lahouh and Karim Abu Sabih. Bassam al-Saadi avoided arrest.

On Sept. 17, 2013, Israeli forces raided the camp and assassinated an Islamic Jihad operative named Islam al-Toubasi following military clashes. This raid led to a split between the camp's residents and the Palestinian security forces. The latter responded to the violent events that accompanied Toubasi's funeral by declaring a security crackdown in the camp.

"There is no security crackdown, but rather an ongoing security process. The reason for the elevated tensions on Oct. 2 came following Toubasi's funeral, when vandals targeted property, cut down trees and attacked shops. [Those involved] exploited the blood of the martyr to target security towers with gunfire and locally-made explosive devices," said Dweikat.

Dweikat's statement surprised Huwail, who said, "They summoned about 1,000 members of the security forces, including Select Unit 101. They gathered for a speech given by the prime minister, and then raided the camp at night using flares and tearing off doors. Is this not a security crackdown?"

Huwail believes that the "military display that took place in the Jenin camp was aimed at provocation.”

"Why are all these forces taking action because some angry teenagers cut down trees, yet we don't see the same action when members of the Fatah Revolutionary Council are fired on in Ramallah in broad daylight?" he added.

The Independent Commission for Human Rights recorded violations carried out by the security forces against residents of the Jenin camp during the crackdown.

Khader Adnan, an Islamic Jihad member and former prisoner, told Al-Monitor, "The security forces assaulted me and then incited youth activists against me because I did not call for any activities in support of those detained [in Israeli prisons]. This is part of the aggression carried out against those active in Islamic Jihad and the movement’s supporters."

Tariq Ka’adan, an active member of Islamic Jihad, concluded by saying, “There is an exchange of roles between the PA and the occupation when it comes to targeting the movement’s members. The PA refrains from arresting members, fearing how this would make them look to the people, and instead asks the occupation to arrest them and clear them out of their way.”