Some East Jerusalemites accuse Israel of not being forthcoming about the spread of the coronavirus in East Jerusalem and criticize it for shutting down local efforts against the virus that are backed by the Palestinian Authority. 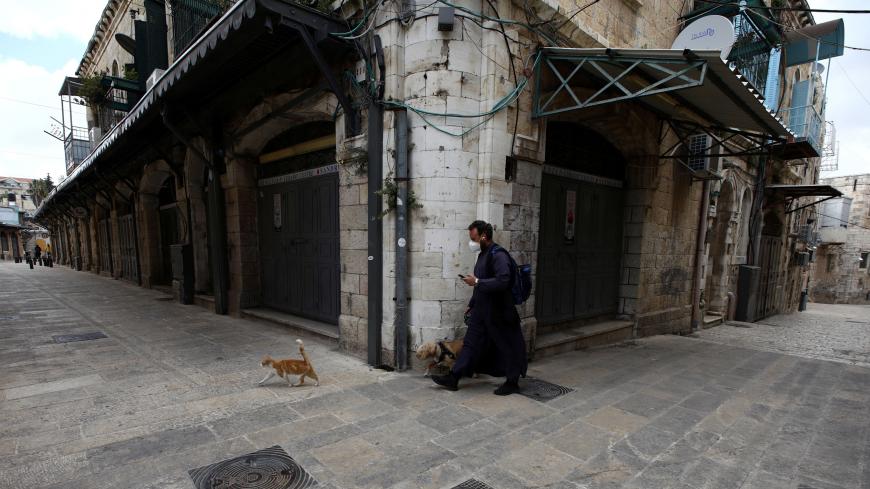 A man walks with his dog amid coronavirus restrictions in a street in Jerusalem's Old City, April 9, 2020. - REUTERS/ Ammar Awad

RAMALLAH, West Bank — The initial approach by the Israeli Ministry of Health to the novel coronavirus in Palestinian communities of East Jerusalem has had residents concerned and in some respects having to rely on their own efforts to stem the spread of COVID-19. Fears among East Jerusalemites were exacerbated when the first death in the area from COVID-19 — that of Nawal Khalil, an elderly woman who suffered from chronic illness — was recorded on April 18.

The Jerusalem Doctors’ Network had sounded the alarm April 13 about the spread of the coronavirus in East Jerusalem’s neighborhoods and called on residents to take measures to protect themselves, given the lack of information from Israeli authorities in this regard.

The Israelis only agreed on April 13 to open testing centers on April 14 in East Jerusalem, in the Shuafat and Kafr Aqab refugee camps, setting up two stations in each, in response to a petition submitted to the Israeli Supreme Court on April 8 by the Legal Center for Arab Minority Rights in Israel in coordination with the Civic Coalition to Defend Palestinian Rights in Jerusalem. There are now six testing sites in East Jerusalem.

Mai al-Kayla, the Palestinian Authority (PA) health minister, said in a government briefing on April 15 that her ministry relies on estimates provided by local sources, which she did not identify, for coronavirus figures in East Jerusalem. Government spokesperson Ibrahim Melhem said that Israeli authorities refuse to provide the PA with the number of cases among Palestinians. Israel does not allow an official PA presence in East Jerusalem, whose annexation by Israel is not recognized under international law.

The Israeli Ministry of Health tracks cases in East Jerusalem, but does not distinguish among Arab and Jewish neighborhoods. The World Health Organization has engaged in the fight against the coronavirus in East Jerusalem, along with the European Union. WHO launched a dashboard to track the outbreak and leads the Risk Communications and Community Engagement campaign along with UNICEF, UNRWA (United Nations Relief and Works Agency) and the Israeli Ministry of Health to inform Palestinians about how to protect themselves. The Bank of Palestine and PICA, the Palestinian International Cooperation Agency, also provide support for the campaign. On April 9, the EU donated 9.5 million euros ($10.3 million) to the six hospitals in East Jerusalem, above and beyond the 13 million euros ($14.1 million) it provides in annual financial support.

Densely populated Silwan, with a population of 70,000, has emerged as a virus hotspot. Jawad Seyam, who heads the East Jerusalem-based Wadi Helwa Information Center, which tracks Israeli actions in East Jerusalem, told Al-Monitor that his center documents cases through contacts with local committees in East Jerusalem. He believes the number of infections to be much higher than documented, as is the case around the world.

Seyam said that Israeli officials had closed down every individual or collective Palestinian volunteer effort to counter the virus despite the Israeli government initially ignoring East Jerusalem in responding to the crisis.

On April 14, the Israeli police raided and closed a clinic that a local civilian committee set up in a hall at a mosque. The clinic had been provided material by the PA Ministry of Health along with 300 test kits.

“Jerusalemites do not have the financial or medical capacities to deal with the pandemic,” Seyam said. “Even quarantine spaces are not available in Silwan due to the high population density. Families live in small apartments, which makes self-isolation hard for an infected member.”

Samer al-Awar, a member of the Silwan Doctors’ Committee, told Al-Monitor that East Jerusalem is at a crossroads. “Citizens should commit to isolation and quarantine,” he said, given that there are known cases in neighborhoods there. He further asserted that the reported cases are draining Jerusalem doctors and that they cannot get real numbers from the Israelis despite requests for them.

Adnan Ghaith, the PA-appointed governor of East Jerusalem, said, “Jerusalemites are battling against the virus under complicated circumstances. Israeli authorities are putting spokes in the wheels and preventing us from offering support for Jerusalemites.”

Ghaith asserted that the 350,000 Arab residents of East Jerusalem are paying the highest price among Palestinians, claiming that a third of Palestinian coronavirus cases are in East Jerusalem, blaming them on Israeli negligence. At the behest of the PA, Ghaith has been involved in raising awareness and providing instructions. He also launched an electronic platform to assist Palestinians in securing food, medicine, deliveries, aid services and medical consultations.

Israeli authorities arrested Ghaith on April 5 at his house in Silwan due to his activities to counter the coronavirus. They released him the following day. Having banned PA activity in the city, Israel considers Ghaith's actions illegal. Israeli police had also arrested Fadi al-Hadami, the PA's Jerusalem Affairs, at his house April 3 because of his activities surrounding COVID-19.

“There are increased fears among Jerusalemites due to the way the Israeli authorities are addressing the pandemic in Jerusalem,” Ghaith asserted. “Jerusalemite individuals and associations have taken social initiatives like providing quarantine areas, launching disinfecting campaigns and offering awareness and health instructions.”

On April 15, UNRWA spokesperson Sami Mshasha told Wafa, the official Palestinian agency, that Israel is clamping down on UNRWA staff working in East Jerusalem refugee camps to control the virus' spread. The authorities were restricting entry into and exit from the camps, especially the Shuafat camp.

As of April 23, the PA Ministry of Health was reporting 144 cases in East Jerusalem, including two deaths and 18 recoveries.