Why is Israel after Adnan Ghaith?

Israel continues to target Adnan Ghaith, the Palestinian Authority’s representative in Jerusalem, for arrest and bans, claiming that his activities in East Jerusalem undermine Israeli authority over the city, while Palestinians see the Israeli actions as an attempt to eliminate the Palestinian presence there. 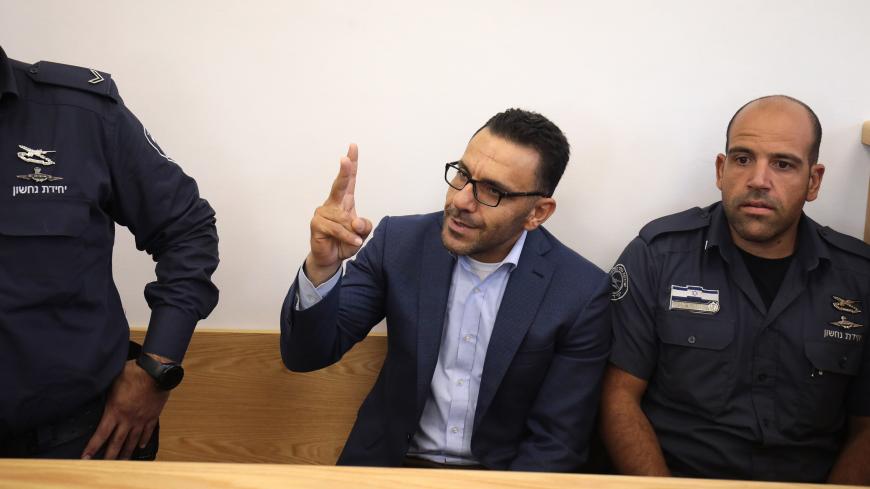 RAMALLAH, West Bank — Over the years, Israeli authorities have been increasingly aggressive in moving against activities and events held by the Palestinian Authority (PA) and its representatives in East Jerusalem. In line with this has been an Israeli campaign targeting the activities of Adnan Ghaith, the PA's appointed governor for Jerusalem. Ghaith told Al-Monitor that he has been arrested or detained 13 times since taking office on in August 2018.

Most recently, the Israelis arrested Ghaith Oct. 14 on the charge of “exercising sovereignty in Jerusalem” and released him on bail. Two weeks later, Oct. 28-29, Shin Bet, Israel's intelligence agency, summoned Ghaith to the Maskoubia detention center in Jerusalem, where he was handed an order by Israeli Public Security Minister Gilad Erdan limiting or banning his work in the city.

Ghaith told Al-Monitor, “Erdan’s decision to prohibit me from holding any meetings with Jerusalemites and civil and popular institutions in Jerusalem and taking part in any [public] activities in the city and disbursing money to Palestinian institutions and Jerusalemites affected by the occupation’s policies are designed to prevent me from conducting my duties as governor of Jerusalem.”

Born in the East Jerusalem neighborhood of Silwan, Ghaith, at 43, is the youngest official in the PA. In 2006, when he was 30, he was detained by Israeli authorities and spent 11 months in jail for his involvement with popular committees and activity in Fatah challenging Israeli actions in the city and taking part in anti-occupation events. Ghaith is currently studying political science at al-Quds University in Abu Dis.

Prior to being appointed the PA's Jerusalem governor, Ghaith had been a leader of the Popular Committee for the Liberation of Palestine in the al-Bustan section of Silwan and a top Fatah official in East Jerusalem. He also intermittently spent time in Israeli prisons over the course of eight years. The first time was in 1989, when he was 13 years old, remaining in detention for three months for taking part in the first Palestinian intifada, which began in 1987. Ghaith was last detained in 2014 and remained under administrative detention, that is, held without charges, for six months.

In 2010, the Israelis had expelled Ghaith from Jerusalem, exiling him in effect to Ramallah, for a year because of his anti-settlement activities and participation in sit-ins al-Bustan against home demolitions in the neighborhood, he said.

Among the reaons some believe Israel has its eye on Ghaith since he became governor is his role in exposing people and institutions leasing or selling real estate in East Jerusalem to pro-settlement associations.

On Aug. 5, Erdan extended an order banning cultural and political activities by Palestinian organizations and the PA in East Jerusalem, on the grounds that some of them are “terrorist” activities and that the PA is trying to undermine Israeli sovereignty in East Jerusalem by replacing Israeli institutions with ones of its own. The order extended the closure of many Palestinian institutions in the city. Ghaith's official position involves him in a range of activities in Jerusalem, making him a lightning rod for the Israelis.

US President Donald Trump's decision in December 2017 to recognize all of Jerusalem as the capital of Israel, Ghaith claims, has given Israel an even freer hand in the city. “[East] Jerusalem and its leaders have been increasingly targeted since Trump took office and following his Jerusalem decision given the Trump administration’s support for Israel,” he said.

Ghaith also asserted, “The attack on Jerusalem is due to the Palestinians rejection of [Trump's Middle East] deal of the century, countering the Israeli plans that seek to promote settlement activities in the city and defying the US schemes.”

The Israeli army issued an order on Nov. 8, 2018, and renewed it June 8, 2019, banning Ghaith from entering the West Bank for six months, on the grounds of inciting against Israel and posing a threat to Israel's security. It issued another order on Nov. 19, 2018 banning Ghaith from communicating with a group of Palestinian figures in Jerusalem, among them Adnan Husseini, a member of the PLO Executive Committee, Majed Faraj, head of the Palestinian intelligence services, and Chadi Matour, Fatah’s secretary in Jerusalem.

Ghaith remarked, “I have been subjected to daily harassment by the occupation’s police, which breaks into every event or activity I take part in, and I get arrested and interrogated for hours.” When asked whether he had challenged the latest military order against him in the Israeli courts, he asserted, “The Israeli judiciary is biased, and I do not trust it. The previous experiences have proven that it was not impartial. Rather, it justified and backed the Israeli security agencies’ decisions against us and against every Palestinian in Jerusalem.”

Ghaith went on to say, “By going after me and the Jerusalemite leadership, Israel seeks to end any official Palestinian presence in Jerusalem, erase any appearances of Palestinian sovereignty there, and restrict my work representing the PA.” He added that every time he is arrested, the Israelis accuse him of undermining Israeli sovereignty in Jerusalem.

The Israelis have also gone after PA Jerusalem Affairs Minister Fadi al-Hadami, who took office in April. Hadmi, whose job it is to implement PA programs in the city and represent it in meetings with consulates in Jerusalem, has been arrested four times and is constantly summonsed for interrogation. On Nov. 3, Hadami was allegedly assaulted during his arrest by Israeli police, in the Sawana neighborhood of Jerusalem. The police detained him for six hours, interrogating him about his political activities in Jerusalem, Wafa reported.