Israel has stepped up efforts to block Palestinian activities in East Jerusalem and is closing major institutions in the city. 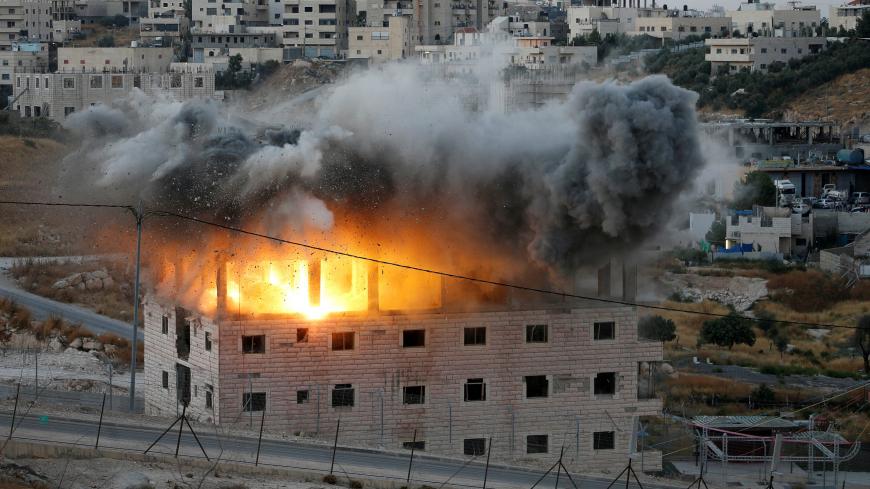 A Palestinian building is blown up by Israeli forces in the village of Sur Baher, which sits on either side of the Israeli barrier in East Jerusalem and the Israeli-occupied West Bank, July 22, 2019. - REUTERS/Mussa Qawasma

RAMALLAH, West Bank — Israeli forces in East Jerusalem prevented a lecture on the Israeli demolition of Jerusalemite homes from being delivered Aug. 17 at the Burj Luqluq Social Center Society. The lecture had been organized by Burj Luqluq in cooperation with the Palestinian Bar Association.

The same forces stopped a ceremony from being held Aug. 6 in honor of the late athlete Ahmad Adilah at The East Jerusalem YMCA because the ceremony was sponsored by the Palestinian Authority. They also prevented a memorial service for the Palestinian writer Subhi Ghosheh from taking place Aug. 5 at the Yabous Cultural Center. They stormed the center and assaulted participants. Four randomly selected participants were summoned by the Israeli intelligence for interrogation at the Al-Maskobiyya Interrogation Center in Jerusalem.

These actions come from Minister of Internal Security Gilad Ardan's Aug. 5 order to extend the closure of Palestinian institutions in the city and prohibit any cultural or political activities held by Palestinian organizations. The decision deems such events terror activities that violate Israeli sovereignty and laws in the city.

Ghosheh is a well-known Jerusalemite figure. He studied medicine at the American University of Beirut and co-founded Al Makassed Charitable Society in 1956 and Al-Makassed Charitable Society Hospital in 1968. After Israel defeated Egypt, Jordan and Syria in 1967 and occupied the West Bank, East Jerusalem, the Gaza Strip, Sinai, southern Lebanon and the Golan Heights, he founded the Palestinian Popular Struggle Front in Jerusalem and was subsequently arrested and deported in 1971. He died in Jordan on April 30.

Ziad al-Hammouri, director of the Jerusalem Center for Social and Economic Rights, was among those who wanted to attend the memorial ceremony.

He told Al-Monitor, “The Israeli police and intelligence agents broke into the center, beat the attendees and prevented the holding of the memorial service.” They wrote summons for some of the participants, including Hammouri, who appeared before the Al-Maskobiyya Interrogation Center on Aug. 8 and was told that activities organized by the PA were not allowed in East Jerusalem.

Hammouri added that such steps were a prelude to the enactment of an Israeli law that sentences any Jerusalemite with ties to the PA to up to three years in prison in an effort to clamp down on Jerusalemites.

The Israeli daily Yedioth Ahronoth reported June 16 that in response to increasing PA activities in East Jerusalem, Ardan was working on a bill to block the PA from organizing there and impose up to three years in prison for anyone who participates in or finances Palestinian activities in the city. The bill would amend a 1994 law on the Gaza Strip and the Jericho area that forbid the PA from engaging in any activity in East Jerusalem but did not include any penalties. The Palestinian Foreign Ministry said in an Aug. 7 statement that Ardan’s decision comes as part of Israel's plans to Judaize the city.

The statement read, “The Palestinian institutions in East Jerusalem do not need permission from the occupation authorities and their racist minister, Ardan.”

In October 1993, Foreign Minister Shimon Peres sent a letter to Norwegian Foreign Minister Johan Holst, pledging to provide a favorable environment for Palestinian institutions in Jerusalem to perform their functions.

Governor of Jerusalem Adnan Ghaith told Al-Monitor that Ardan's order is intended to tighten Israel's control over East Jerusalem with US support. The United States has recognized Jerusalem as the capital of Israel and relocated its embassy there. As Israel appears to be Judaizing and tightening its control over Jerusalem, this US support will push it to take further action against Palestinians in the city.

He added, “These decisions will not discourage Palestinians in Jerusalem from continuing to do whatever entrenches their Palestinian identity and presence.”

Ghaith said that after the outbreak of the Al-Aqsa intifada in 2000, Israel decided to close several institutions in East Jerusalem and closed them again regularly in a bid to entrench its rule and abolish any Palestinian role in the city.

He said that the US decisions on Jerusalem serve as a green light for Israel to further encroach upon the rights of Palestinians while turning a blind eye to the international community, encouraging Israel to make many racist decisions, expand its settlement activities, demolish houses and close institutions.

The decision to extend the closure has affected 26 Jerusalem institutions including Orient House, the Arab Chamber of Commerce and Industry Jerusalem and the Supreme Council of Tourism.

Khalil al-Tafakji, director of the maps department at Orient House in Jerusalem, which Israel closed in 2001, told Al-Monitor that Ardan's decision is about more than closing institutions and banning events; it's about entrenching Israel’s sovereignty over the city.

Built in 1897 by Ismail Moussa al-Husseini, Orient House served as a guest house for international officials visiting Jerusalem. In 1980, Faisal al-Husseini rented part of it and used it as a headquarters for the Arab Studies Society, but Israel closed it in 1988. As soon as Israel allowed its reopening in 1992 after the 1991 Madrid peace conference, Husseini, who was in charge of Jerusalem affairs in the PLO Executive Committee, rented the entire building to expand its works.

Orient House also served as a headquarters for the PLO and a place for Palestinian-Israeli peace delegations to meet with the United Nations' special envoy and discuss the issue of the Palestinians deported from the West Bank and Gaza to Marj al-Zuhur in Lebanon.

On Dec. 17, 1992, Israel deported 416 Hamas and Islamic Jihad members to the Marj al-Zuhur area in southern Lebanon following the abduction of an Israeli soldier by the Hamas-affiliated Al-Qassam Brigades. Al-Qassam offered to set him free in return for the release of Sheikh Ahmed Yassin, among other detainees. However, the Israeli government rejected the deal and stormed the house where the soldier was held, leading to his death.

Tafakji explained that Orient House has long been a political destination for Palestinians. Since its opening in 1992 until its closure in 2001, officials from the region and the world visited it, much to Israel's annoyance.

Ardan's Aug. 5 decision to renew the closure of Orient House is intended to prevent the building from performing its functions, Tafakji said.