Reopening the historic Orient House in Jerusalem — which served as the PLO headquarters until 2001, when Israel closed it — would have the potential to show Israel's willingness to give the Palestinians more control in their struggle for self-determination. 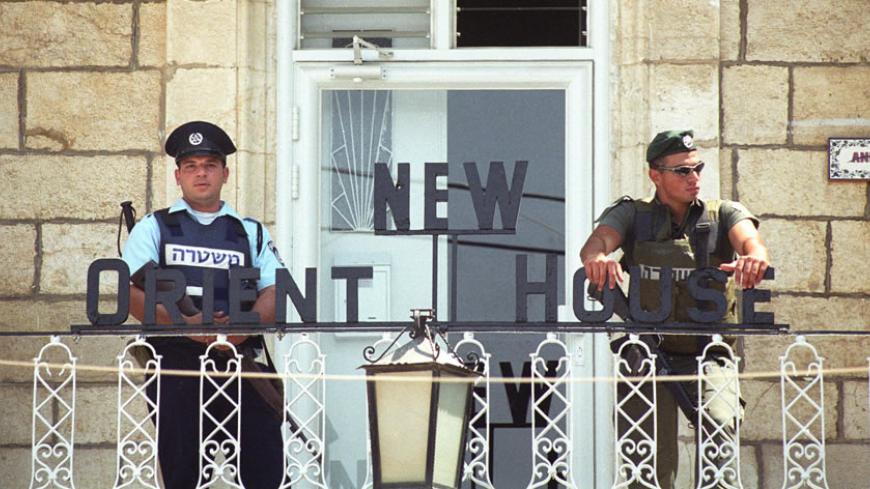 Israeli policemen keep watch Aug. 10, 2001, from a balcony at Orient House, then the East Jerusalem headquarters of the PLO, after Israeli police and special forces entered and closed it following a deadly suicide bombing. - REUTERS

The young Palestinians active in the current Jerusalem protests were infants when the PLO’s headquarters in Jerusalem were ordered temporarily closed for six months on Aug. 9, 2001, along with nine other Palestinian organizations. Fourteen years later, the six-month closure has been repeatedly renewed along with the Jerusalem Chamber of Commerce.

A question that has been publicly asked is whether the reopening of Orient House would help in restoring a local Palestinian leadership that has been decimated for the past two decades.

Faisal Husseini, the son of Palestinian leader Abdel Qader Husseini, who was killed in the 1948 war, attempted to establish himself as a local leader by getting involved in public affairs. Under Faisal Husseini's guidance, the Arab Studies Society was established in 1980, registered in Israel as a public institute and was located in the historic Orient House building, which the Husseini family owns. Like any think tank, the society held lectures and conferences and housed a big public library.

The website of the Arab Studies Society says Orient House was the site of many diplomatic functions, including a tea party in honor of German Emperor Wilhelm II when he visited Jerusalem in 1898. Hashemite Emir Abdullah, former King Ali and Prince Zeid accepted condolences at Orient House when their father, Sharif Hussein bin Ali (who had been sharif of Mecca), was buried in the Haram al-Sharif in 1931.

Ishaq Buderi, who has administratively headed the Arab Studies Society since its launch, told Al-Monitor that after the first intifada began in 1987, Husseini’s efforts were focused on the political and then the negotiations process. “Orient House eventually became the leading address for diplomats and politicians in the runup to the Madrid talks; the Arab Studies Society became its academic arm and think tank.”

Buderi said Orient House not only became the headquarters for Palestinian negotiations but also housed technical committees that lay the foundation blocks for what would become the Palestinian Authority (PA) — whose headquarters are in Ramallah, as the Israelis refused, even symbolically, to allow any connection between any Jerusalem institution and the newly established PA. This obstinate refusal has continued to the present day.

The Palestinian steering committee to the Madrid Conference led by Husseini and spokeswoman Hanan Ashrawi, which also included the head of the negotiations team, Gaza’s Haider Abdel-Shafi, left for Spain from Orient House in October 1991. Later, and after the Oslo Accord, Orient House continued to serve as the headquarters of the PLO, raising the Palestinian flag in a ceremonial event under the leadership of Husseini on Sept. 13, 1993, as the White House ceremony was taking place.

In 2001, a little over two months after Husseini's untimely May 31 death while on a visit to Kuwait, Israel used an attack on Israelis in west Jerusalem on Aug. 9 as a pretext to close nine Palestinian organizations in East Jerusalem, including Orient House; Israel has routinely renewed the six-month closure order issued by the internal security minister.

The international Quartet made up of the United States, Russia, the United Nations and Europe suggested reopening Orient House in January 2010 as a way of encouraging Palestinians to return to the direct talks, but to no avail.

Buderi and various Palestinian leaders have regularly protested to international diplomats and peace envoys the continued renewal of the closure of Orient House and the Chamber of Commerce. After the adoption of the US-sponsored Road Map in 2003, which set out a clear direction for both sides to move the peace process, Palestinians called on Israel to honor its obligations according to Phase I of the agreement that called for the opening of the closed Palestinian institutions.

Buderi replied in a more academic than political way in response to the question as to whether he believes reopening Orient House would calm the situation in Jerusalem. He told Al-Monitor, “We have 30,000 important books and documents that have been unavailable to us and to the public all these years. We badly need to have access to some of these rare documents to prevent them from deteriorating.” Buderi said that requests to relocate the books in Jerusalem were rejected by the Israelis. “They told us that they would only agree to have these books and documents relocated outside the city of Jerusalem,” he said.

A lot of years have passed since the Madrid Conference's golden days of Orient House and the Jerusalem-based leadership. Not only has Orient House and the Chamber of Commerce been closed for a decade and a half, but the attempt at creating any form of local leadership has been regularly hindered by the Israelis, who have shown zero openness to Palestinian leadership. The reopening of Orient House, the Chamber of Commerce and other national institutions as well as allowing Palestinian political leadership to operate freely could go a long way in empowering Jerusalemites to address many of the grievances that are the basis of the current protests.

It is not clear if the physical reopening of Palestinian institutions would make a huge difference at present. There has been declining support of and respect for the Palestinian leadership from young Palestinians behind many of the protests. However, if such a move signaled a new Israeli openness toward allowing Palestinians to choose their own leadership, then it could be a small step in the right direction of reversing years of denial to Palestinians of the basic right of self-determination.