Though past Israeli ministers promised the Palestinians their Jerusalem institutions would be preserved, the venerable Orient House has been closed and the map department it once housed has been raided outside the city limits. 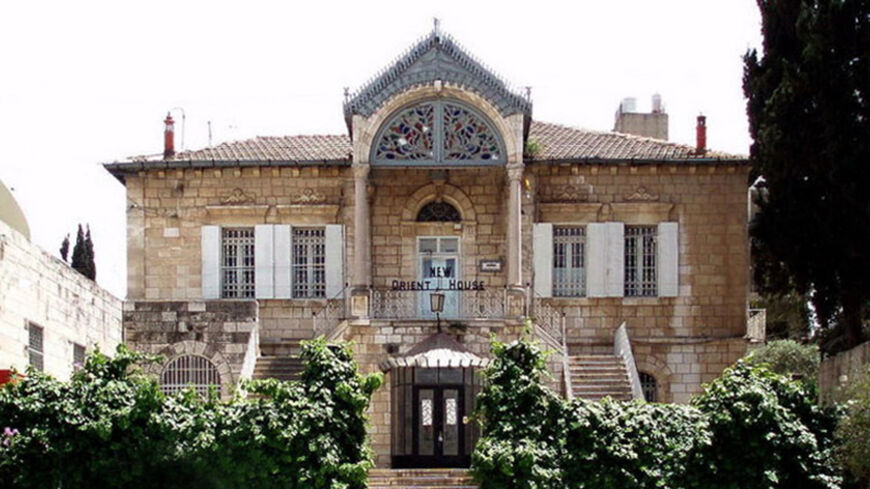 When late Palestinian leader Faisal Husseini launched his political career around 1980, he chose to work out of the Orient House in East Jerusalem. According to the Orient House's website, the iconic building was the site of diplomatic meetings including German Emperor Kaiser Wilhelm when he visited Jerusalem in 1898.

When Sharif Hussein Bin Ali al-Hashemi of Mecca passed away in 1931, the Hashemites — including King Abdullah, King Ali and Prince Zaid — accepted condolences at the Orient House for their father, who was buried at Al-Haram al-Sharif.

In 1948, Abdel Qader al-Husseini, head of Al-Quds Brigades, for the last time led a group of Palestinian fighters in their effort to hold off underground Zionist groups. He was killed in April 1948, and a month later, on May 14, Israel declared independence and was quickly recognized by the world community.

In 1980, Husseini, the son of Abdel Qader, established the Arab Studies Society and used the Orient House to house it. The center contained a library, research facilities and a map department. Husseini, the son of a Palestinian hero and well respected in Jerusalem and Palestine, quickly gained popularity. Local, regional and international politicians came to visit him at the Orient House.

Hanan Ashrawi, who along with Husseini was part of the Madrid Peace Conference steering committee, was the spokeswoman of the Palestinian delegation. She told Al-Monitor that international negotiators and Israel had assured Palestinians that no matter what happened in the peace talks, the Orient House and other existing Palestinian institutions would be preserved.

Ashrawi, now a member of the PLO Executive Committee, told Wafa news agency March 14 that Israeli Prime Minister Shimon Peres had promised in an October 1993 letter to Norwegian Foreign Minister Johan Holst that he would “not hamper” the activities of the Palestinian institutions. Ashrawi said that Peres also wrote, "I wish to confirm that the Palestinian institutions of East Jerusalem and the interests and well-being of the Palestinians of East Jerusalem are of great importance and will be preserved.”

Erekat went on, “Israel, the occupying power, continues to violate its obligations under signed agreements as well as of its commitments vis-a-vis the international community.”

One of the most important parts of the Arab Studies Society was the map department. Headed by Khalil Tufakji, the department moved quietly, with no media attention, out of East Jerusalem and re-established itself in Dahiyat al-Barid, a Jerusalem suburb that is technically outside the city limits.

Tufakji told Al-Monitor that the map department provides technical information and tries to stay apolitical. “We work scientifically and provide maps and information about maps to anyone who asks for it.”

Because of the technical nature of the department, Tufakji was surprised when Israeli soldiers came to his office to arrest him March 14. The Israeli police presented Tufakji with an order from the Israeli public security minister to close the map center for six months on charges of illegally working with the Palestinian Authority while in Jerusalem. “Then they took me to the Mascobia prison and confiscated our computers and equipment,” he added.

“When the interrogation began, they asked me why I was working illegally in Jerusalem. I told them that my office is outside the boundaries of Jerusalem, specifically in Dahiyat al-Barid, in Palestinian territories — Area C. I also said that I am in regular contact with the civil administration, which is in charge of the West Bank’s Area C.”

Tufakji’s answers seemed to surprise the Israeli police, since their order was clearly intended for a location they thought was in Jerusalem. Khalil was detained for some seven hours and released with a promise to be allowed to recover his equipment and return to work.

Tufakji’s lawyer Ziad Hedami told Al-Monitor that one possible explanation for the confusion is that while the map department is not in Jerusalem, it is on the Jerusalem side of the security wall, leading the Israeli police to assume that it is within the legal boundaries of the city, which was annexed by Israel.

Sure enough, within two days, Israeli police called Tufakji and told him he could recover his computers and equipment and would be allowed to reopen his office.

Commenting to Al-Monitor, Tufakji was not sure whether it was a mistake or if the Israelis intended to intimidate him. “They know that our maps are being used by many to study how the settlement effort is executed on the ground. Maybe they were trying to send a message of sorts.”

Regardless of why the mapping center was closed and reopened within 48 hours, it seems clear that Israelis are touchy about any Palestinian connections to the holy city of Jerusalem. Members of the current right-wing Israeli government, which is possibly on the verge of snap elections, are also looking for ways to improve their political portfolios. What better way to do that than to move against Palestinian activists in Jerusalem?