Palestinian governor of Jerusalem boxed in by Israeli authorities

Since assuming his post, Palestinian Governor of Jerusalem Adnan Ghaith has been subjected to a harassment campaign by the Israeli authorities who have restricted his movement within the city. 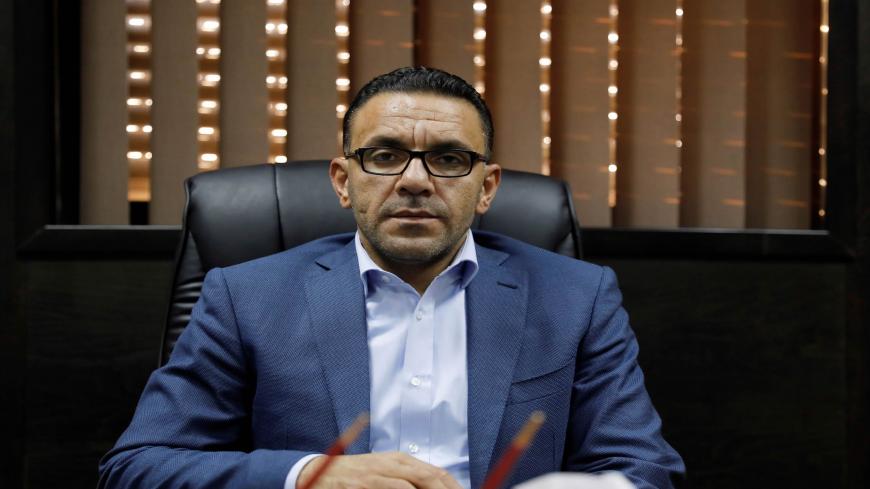 The notice sets a precedent, as this is the first time that Israel takes such a measure against someone holding the position of governor of Jerusalem, the highest position of the PA in East Jerusalem. However, such a move does not come as a surprise as Ghaith has been repeatedly targeted and persecuted since he was sworn in as governor of Jerusalem on Aug. 31, 2018.

In July and August, Ghaith was repeatedly targeted and arrested. On July 19, the Israeli police arrested Ghaith after storming and searching his home in Silwan, south of Jerusalem. His detention was repeatedly extended for interrogation, a move condemned by the PA presidency July 23.

On Aug. 24, the Israeli Magistrate Court in Jerusalem decided to release him after 17 days in detention.

Palestinians in Jerusalem organized several sit-ins to denounce the arrest of Ghaith. Also, the European Union representative to the Palestinians Sven Kuhn von Burgsdorff expressed in a statement Aug. 27 his concern over the circumstances of Ghaith’s arrest. He said, “The governor of Jerusalem, Adnan Ghaith, is an important partner,” calling on Israel to “respect international humanitarian law and human rights obligations toward all prisoners.”

Two days after his release, the Israeli intelligence summoned Ghaith for investigation at Al-Maskobiyya interrogation facility in Jerusalem and handed him a notice, for the fourth time, to renew the Israeli military decision preventing him from entering the West Bank for an additional six months.

Ghaith’s prosecution coincides with a general Israeli policy in Jerusalem targeting Palestinian figures and institutions, the latest of which was the storming and closure July 22 of the Edward Said National Conservatory of Music and the Yabous Cultural Center. This comes as part of Israeli efforts aimed at eliminating the official Palestinian representation and presence inside the city, all the while trying to impose Israeli sovereignty over it, in what embodies US President Donald Trump's declaration of Jerusalem as Israel’s capital last year.

This decision sets a serious precedent aimed at imposing more restrictions on the governor and placing him under house arrest at a time when he is supposed to hold political meetings with international representatives and consuls in Jerusalem; meet with local and international events and institutions; and organize activities and follow up on all political and social issues. The decision deals a blow to the official Palestinian role and work in Jerusalem.

Al-Monitor tried to contact Ghaith on several occasions, but to no avail as all contact channels with the official are closed.

Deputy Gov. of Jerusalem Abdullah Siyam told Al-Monitor that the notice restricting Ghaith’s movement will go into effect in the coming days, and it is expected to remain valid for several months.

He said that the campaign against Ghaith is part of Israel’s targeting of Jerusalem with all its national, religious and societal components, with the aim of passing its scheme exemplified by the US peace plan for the Middle East, known as the "deal of the century," and entrenching the Jewish character in the city while implementing the law of citizenship on the ground.

Ghaith was born in Silwan neighborhood, south of Al-Aqsa Mosque, and received his primary education there. He obtained his high school diploma inside prison in 2006, when he was arrested for 11 months due to his work in the Palestinian Popular Committees in the Silwan neighborhood and his political activities in the Fatah movement. He is considered the youngest ruling Palestinian governor — at age 44 — and since assuming office, he has been detained and arrested more than 18 times.

Various reasons stand behind the continuous pursuit of Ghaith since his assumption of the position of governor, the most important of which is his role in pursuing those selling Palestinian real estate and property in Jerusalem to settlement associations.

Also, the Israeli persecution of Ghaith comes as part of a decision issued by Israeli Minister of Internal Security Gilad Erdan on Aug. 5, 2019, banning Palestinian organizations and the PA from holding any cultural or political activities in Jerusalem, considering these as acts of terrorism and of infringement upon the Israeli sovereignty — Israel being the sovereign party in East Jerusalem, its laws being in force.

Director of the Jerusalem Unit in the Palestinian Presidency Maatssem Tayim told Al-Monitor that the Israeli authorities are increasingly targeting Ghaith, and Palestinian institutions and activities in Jerusalem, taking advantage of the efforts of the United States and its recognition of Jerusalem as the capital of Israel and the relocation of the US Embassy there.

Tayim said that Ghaith is one of 380,000 Jerusalemites facing uprooting and displacement policies. Since the occupation of the city in 1967, he said, Israel has been seeking to change the city's Arab identity through various policies that include forced displacement, deportation, harassment and demolition of homes, with currently more than 28,000 homes in the city facing the threat of demolition at any moment. What the governor is exposed to, he added, is a reflection of what the city has been dealing with for years.

Tayim explained that Israel is targeting Palestinian sovereignty while trying to prove its alleged sovereignty over the city. But Jerusalemites have repeatedly thwarted such attempts, and Ghaith’s targeting will not affect the Palestinian course of action and steadfastness in the city where peace and coexistence with Israel will not materialize.

Asked about the options at hand to confront the decision, Tayim said, “The governor and the Jerusalemites will face all the occupation decisions with greater steadfastness and will challenge these policies.”

He noted, “Our presence on the ground is key. It is our point of strength in confronting Israel. Israel's attempt to create difficult working conditions for the Jerusalemite figures and institutions will fail, but the essence of confrontation in the city is not based on one person but rather on citizens and people insisting on defending their city.”

Israel is in a rush to consolidate its hegemony and sovereignty over Jerusalem in the implementation of Trump’s declaration and recognition of the city as the capital of Israel. Therefore, the pace of Israeli measures and attacks against Palestinian political and religious figures and institutions in the city is likely to accelerate, especially against those representing the PA and the PLO, given the decision prohibiting their presence and work in Jerusalem.