For many who have been dealing with the effects of Lebanon’s ongoing economic crisis or have been marginalized by their refugee status, the pandemic has not been a priority. 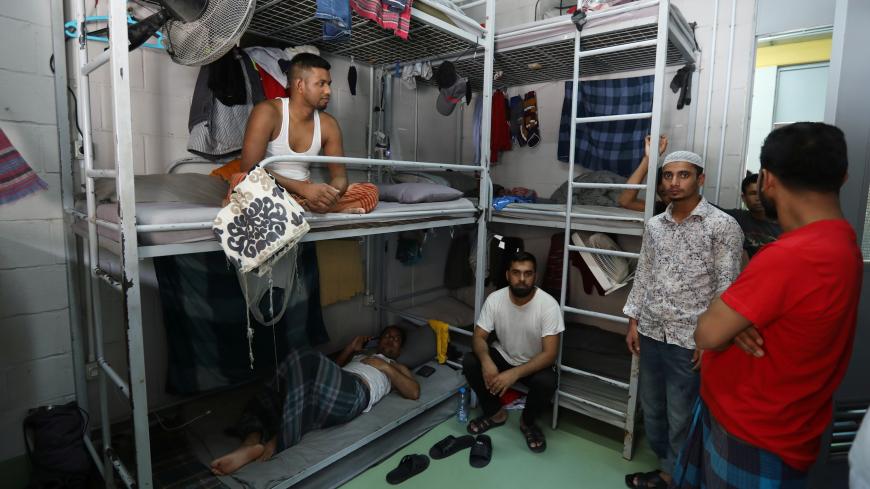 Migrant workers from Bangladesh working for waste management company RAMCO gather inside their dormitory at a company facility in Biakout, near Beirut, Lebanon, May 20, 2020. - REUTERS/Mohamed Azakir

BEIRUT — Nearly four months since the novel coronavirus first arrived in Lebanon, the country’s testing capacity has grown steadily according to medical experts, who express confidence that Lebanon’s health sector will be able to bear the weight of the pandemic. But although the virus remains largely confined to several isolated clusters across the country, a lack of contact-tracing staff, inadequate compliance with quarantine guidelines in certain areas and a low level of concern about the virus among certain impoverished communities have hampered efforts to contain it.

As of May 31, the country had 1,220 confirmed cases and 27 deaths, numbers significantly lower than those of many of its neighbors in the Middle East and Europe. On May 4, the country began a phased reopening of its economy, with a subsequent rise in new cases this month.

For many Lebanese and refugee populations alike, however, mounting concerns about unemployment, low standards of living and social marginalization have continued to present more immediate challenges to daily life than the virus.

Over the last several weeks, most of the new cases among the local population in Lebanon have arisen in clusters in the towns of Majdal Anjar, Mazboud and Jdeidet el-Qaytaa, all of which have been placed under localized quarantines and lockdowns. Another hotspot appeared in a population of foreign workers in Ras el-Nabaa near Beirut. In Majdal Anjar, 15 Syrian refugees, none of whom live in Lebanon's dense refugee camps, had tested positive as of May 29. Jdeidet el-Qaytaa is located in Akkar, one of Lebanon’s poorest districts.

“I think that these are our weakest links — the housing of foreign workers, the refugee camps and the prisons,” Firass Abiad, the CEO of Rafik Hariri University Hospital, which is the main hospital treating coronavirus cases in Lebanon, told Al-Monitor. “If COVID-19 find its way in there, then you’re going to see a large surge in cases.”

There are an estimated 1.5 million Syrian refugees in Lebanon, according to the United Nations High Commissioner for Refugees (UNHCR). No cases have been confirmed in Lebanon’s prisons or Syrian refugee camps so far, but steps are being taken in Roumieh Prison, the country’s largest, to prepare for a local outbreak. Four positive cases were reported by health officials in the Wavel Palestinian refugee camp in the Bekaa Valley in April.

Abiad noted on Twitter that recently repatriated individuals from abroad had been identified as the source of some clusters, and told Al-Monitor that overall, compliance with coronavirus prevention measures had been lower in peripheral, marginalized areas than in Beirut.

“The major problem is the cultural and social problem that we have here, the social differences that we have,” Ziad Rahal, CEO of Rahal Akkar Hospital in Halba, Akkar, told Al-Monitor. “Because people there are not still aware of the severity of this virus, they are neglecting it, they are ignoring it, they are not taking it as seriously as they must to protect themselves and to protect others from it.”

A lack of adherence to preventive measures was also reported in Majdal Anjar, where even as the city was under quarantine from the outside, business was apparently taking place as usual inside the quarantine zone.

“Not many of them were complying with the quarantine,” Osama Alaa Aldiin, a Syrian refugee living in the town, told Al-Monitor. “They did not comply with the rules," he said, adding people wore masks but went about normal life without worrying about the virus, which they feel "is a lie.”

In response, town leaders, including Mayor Said Hussein Yassine, announced a five-day lockdown starting on May 30 during which all shops would be closed and all street movement forbidden. Photographs sent to Al-Monitor suggested that locals were complying with these latest measures.

Lisa Abou Khaled, spokesperson for UNHCR in Lebanon, told Al-Monitor that the agency has been in contact with refugees who had tested positive for the virus to ensure that they are following safety guidelines and practicing self-isolation.

Access to testing has been increasing in Lebanon as the outbreak has advanced. According to Abou Khaled, testing efforts among Syrian refugees have focused on both symptomatic and asymptomatic individuals living in informal camps and shelters. Yet overall, the number of tests administered per day nationwide has still fallen short of medical professionals’ recommendations.

Some social difficulties have hampered testing as well. On the weekend of May 16, a medical team traveled to Akkar prepared to conduct up to 700 polymerase chain reaction tests in the area, but only conducted 124. Out of these tests, 17 positive cases were found, and one doctor on the team later tested positive as well.

“When the Ministry of Public Health does the screening tests and sends out medical staff to a region or a village in peripheral areas that includes between 5,000 to 7,000 inhabitants and only comes out with a hundred tests, there is a big problem,” Rahal said.

Despite many locals in Akkar's refusal to be tested, Walid Ammar, the outgoing director general of the Ministry of Public Health and lecturer at several Beirut universities, stated he is not concerned.

“The most important indicator that this situation is under control is that we don’t really have severe cases we were not aware of that come suddenly to hospitals and then we discover they are COVID positive,” Ammar told Al-Monitor. “We don’t have surprises.”

Other doctors and officials at the Ministry of Public Health could not be reached by Al-Monitor for comment.

According to Abiad, contact tracing can be more difficult among urban populations in the Beirut area than in rural communities. The foreign worker cluster in Ras el-Nabaa is one example.

“If you see the living conditions that those workers live under, they tend to be very densely packed,” Abiad said. “This is to an extent something that we need to be very careful [about], whether we might at one point see some kind of a domino effect where we see these infections moving from certain housing quarters to others,” he added.

Undocumented foreign workers in Lebanon have often encountered difficulties in accessing health care services, according to Amnesty International, and many such workers have also reportedly been unable to get tested.

Palestinian refugee camps are another potential hotbed for infection due to their population density and poor living conditions, Abdelnasser el-Ayi, the office director for Lebanese Palestinian Dialogue Committee, told Al-Monitor.

“The infection rate is almost double or triple inside the Palestinian camps than in any [area outside of refugee camps], which brings up more risks of infection and makes it much more difficult to trace cases,” Ayi said.

According to Abiad and other medical experts who spoke to Al-Monitor, awareness about prevention measures is growing among populations living in peripheral areas of Lebanon. Yet for many who have been dealing with the effects of Lebanon’s ongoing economic crisis or have been marginalized further due to their refugee status, the coronavirus has not been a priority.

Since the beginning of the coronavirus crisis, Syrian refugees have been subjected a special set of curfew rules and treatment by municipalities and authorities, according to a Human Rights Watch report in April.

Abiad stated that new clusters will likely continue to show up in Lebanon, but that he remains optimistic about Lebanon’s ability to respond. According to Rahal, the best way to improve the current efforts is to craft a strategy that is catered to Lebanon's specific needs.