Critics say the Lebanese government's figures are unreliable amid the coronavirus crisis, fearing severe strains on the health care system in case of a major outbreak of the novel virus. 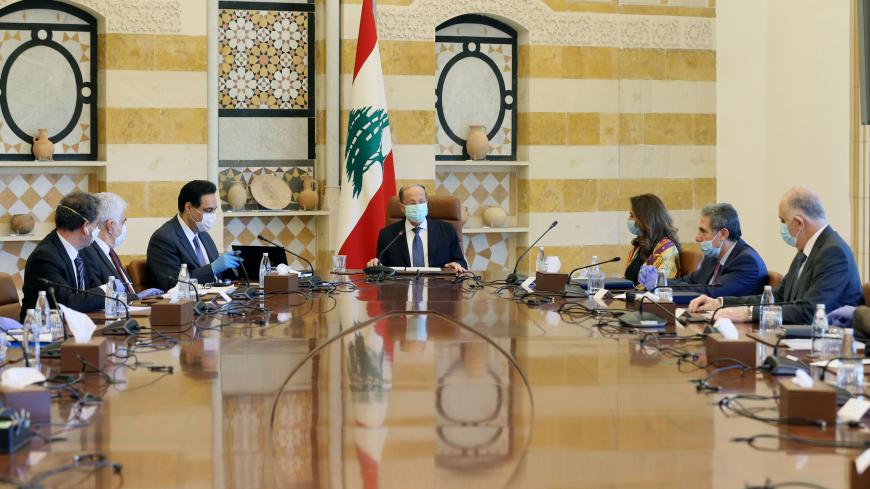 Over two months since it reported its first case of the novel coronavirus on Feb. 21, Lebanon has shut down all nonessential institutions, including Beirut’s international airport, and has put in place nightly curfews and a host of other measures to encourage people to stay home. On April 9, the Lebanese Cabinet extended the nationwide lockdown until April 26. The approach so far appears to be yielding some positive results — the number of new confirmed daily cases of coronavirus infections has started to fall since late March, and overall numbers have remained manageable compared with other countries both in the Middle East and Europe.

This recent dip has given researchers and medical professionals cautious hope that the country’s health care system capacity may be able to weather the coronavirus crisis without being overwhelmed. But significant challenges around limited medical supplies and testing remain, making it difficult to ascertain the full scope of the outbreak, where the peak will take place and whether there will be a surge in new infections down the line.

In addition, although the measures the Lebanese government has implemented have been praised by many medical practitioners, critics of the state’s handling of certain elements of the crisis have emerged, and — according to sources — a lack of trust in the government’s ability to provide reliable information runs deep for some in the health care sector.

“I wouldn’t say that we are flattening the curve; I would rather say that we are delaying the peak,” Walid Ammar, director general at Lebanon’s Ministry of Public Health, told Al-Monitor.

As of April 10, the total number of coronavirus cases in Lebanon sits at 609. Ammar stated that while he remains cautious about interpreting existing data, the ministry is confident they are capturing the majority of cases, citing the relatively low number of people with severe coronavirus symptoms who have been hospitalized. According to him, this number is currently no more than 60.

Ammar also stated that Lebanon’s total capacity for coronavirus patients is currently at 576 beds, 234 intensive care units and 263 ventilators, claiming that these numbers would increase by 50% “at the end of the month.” He said he is “comfortable” with this capacity given the current number of cases.

Shadi Saleh, founding director of the Global Health Institute at the American University of Beirut, said he felt encouraged by the recent numbers.

“Overall I am optimistic that in Lebanon we will not reach a stage where the health care system will be overwhelmed,” he told Al-Monitor.

The Global Health Institute produced a projection March 26 estimating how many confirmed positive cases Lebanon’s health care system could bear before being overwhelmed, and given existing government measures, estimated that the number of coronavirus cases would approach system capacity by the last week of June. But Saleh stated that because of the most recent developments, this date may, in fact, arrive even later. He hypothesized that the change in seasons may mean the outbreak will temporarily subside by then.

Nevertheless, not everyone in the medical community has the same outlook. Fatima al-Sayah, a Lebanese public health researcher at the University of Alberta in Canada, praised the government’s early response to the viral outbreak, but stated that the Ministry of Public Health has not provided all the necessary estimates to make a clear determination about the future of the outbreak in Lebanon. Unlike Ammar, who estimated that the total number of real cases is only 200 or 300 more than the confirmed count, Sayah’s analysis of Lebanon’s death rate suggested instead that Lebanon is “under-reporting by a factor of three to five,” putting the number of total cases in the thousands.

“There is a sense that there will be a surge at some point,” she said about views she has encountered among Lebanon’s medical community, “but they have no idea when.”

“The small number of cases that we have been seeing for the last week or so could be a reflection of the effectiveness of containment measures or insufficient testing; the truth is probably somewhere in between,” Sayah told Al-Monitor, adding, “Without expanding testing capacity, it’s difficult to evaluate the growth of cases.”

Firass Abiad, CEO of Rafik Hariri University Hospital where the first coronavirus cases in Lebanon have been treated, agreed that more testing was needed. He said there are several “black holes” for testing in Lebanon, which include communities living in refugee camps, prisons and rural areas.

According to Ammar, 550 tests are given daily in Lebanon, but these are being prioritized for high-risk individuals and community screening is not yet taking place. Public Health Minister Hamad Hassan stated on April 7 that the rate of testing would reach 1,000 polymerase chain reaction tests per day next week, but Ammar said he hopes to see this number rise to 2,000 soon. Citing a new cluster of cases discovered in the mountain town of Bsharri in north Lebanon on April 7, Abiad went further and wrote on Twitter that the rate of testing should increase to 2,500 per day.

Ammar said the largest obstacle facing Lebanon in the ministry’s view is the availability of reagents for testing, swabs and personal protective equipment (PPE) for medical workers during the crisis. According to Ziad Rahal, CEO of Rahal Akkar Hospital in Halba in north Lebanon, such shortages are present across the country.

“I can say that in all of Lebanon, we have a shortage of PPEs in the private sector,” Rahal told Al-Monitor.

Martine Orio, general manager of the Hotel Dieu de France Hospital in Beirut, cited overpriced PPEs and masks as a potentially major problem for the hospital going forward, as has been the case in other parts of the world.

“As far as now, we can face the epidemic,” Orio told Al-Monitor, adding, “But it could be a problem if the prices increase more and more or if we have no way to find supplies.”

According to a March 24 report from Human Rights Watch, throughout the coronavirus outbreak, Lebanon’s health system has been suffering from a chronic shortage of imported supplies and a lack of funds as a result of the country’s economic and fiscal woes. These inadequacies have left many health care workers at risk of infection, and many said they have had to go without pay.

“We are talking maybe hospitals will shut down, maybe staff will resign because they are not getting paid,” Rahal said of the potential effects of the outbreak on Lebanon’s health care system. He added, “So I don’t see that if we look more in the future and we have more severe patients without any plan that we can say that the health care sector will get back in shape at the right time.”

Rahal also criticized the Lebanese government’s lack of planning and its reactive attitude during the coronavirus crisis.

“We cannot ask for hospitals every time there’s a coming pandemic or an outbreak to build another building to receive the patients that might be at risk, because we have our own patients that need to be kept safe,” he said.

Others have apparently gone further. According to Sayah, some professionals in the health care industry have told her they remain doubtful about the ability of the Lebanese state to provide accurate information.

“There is an enormous lack of trust in the ministry’s plan and the numbers being shared,” she stated. “This is not necessarily a reflection of the current government, but rather the long history of corrupt governance and lack of transparency by government officials,” added Sayah.

Moving forward, despite recent numbers, little is totally clear about the future of the coronavirus outbreak in Lebanon. Rahal stated that in his view the most likely scenario is a continued, low-number outbreak that lasts for two to three months, while Saleh cautioned that despite an eventual ebb in summer, Lebanon should prepare for a reemergence of the virus in fall. For Abiad, it is possible that the country’s most challenging period may still lie ahead.

“I think we still have a lot of trying times coming ahead, and my biggest worry obviously is if we have a perfect storm made from both the health care challenges and the financial challenges on top of that. So by all means, I don’t think that the worst part of this crisis is behind us,” Abiad said.