With social distancing relaxed and hospitals under strain, Lebanon reported a record 309 new cases and seven deaths from the virus Tuesday. 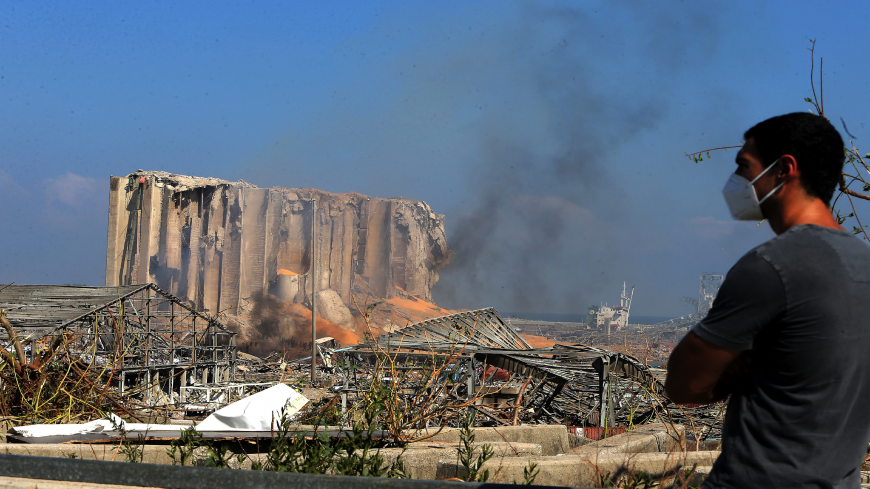 A man wearing a protective mask against the coronavirus stands across the road from the damaged grain silos of Beirut's harbour August 5, 2020, one day after a powerful twin explosion tore through Lebanon's capital, resulting from the ignition of a huge depot of ammonium nitrate at the city's main port. - Photo by STR/AFP via Getty Images

Lebanon has recorded a surge in new coronavirus infections that health officials warn could worsen with hospitals still reeling from last week’s explosion in Beirut.

On Tuesday, the Health Ministry confirmed a record 309 new cases and seven deaths, bringing the country’s total to 7,121 cases and 87 deaths. Health Minister Hamad Hassan has warned the rate of infection is likely to increase in the coming days.

The small Mediterranean country has reported a relatively low number of cases compared to its neighbors, but a spike in cases in late July prompted officials to reimpose restrictions on bars, places of worship, nightclubs and other venues. The aftermath of the blast will only compound the COVID-19 threat, the United Nations Office for the Coordination of Humanitarian Affairs (OCHA) said in an Aug. 10 report.

“The emergency in Beirut has caused many COVID-19 precautionary measures to be relaxed, raising the prospects of even higher transmission rates and a large caseload in the coming weeks,” said OCHA.

Until basic services can be restored, the agency warned the roughly 300,000 people made homeless by the explosion will have limited access to sanitation and hygiene supplies.

OCHA said at least 15 medical facilities, including three major hospitals, sustained partial or heavy structural damage during the blast. In addition to treating the thousands injured in the explosion, those hospitals still functioning were further squeezed by an influx of patients injured in the anti-government protests that followed the explosion.

Hospitals were already running low on personal protective equipment, and many of the shipping containers carrying hundreds of thousands of masks, gloves and gowns were destroyed in the blast. Rona Halabi, spokeswoman for the International Committee of the Red Cross, told Agence France-Presse that Beirut’s hospitals used two months' worth of supplies on the night of the explosion.

Firass Abiad, director general of Beirut’s Rafic Hariri University Hospital, the main public hospital battling the disease, tweeted Thursday that coronavirus safety measures were “unfortunately but understandably” not adhered to during the chaos.

“That will not have helped,” he said. “COVID-19, on the rise, will be more difficult to contain after what has happened. The tolerance of people to lock down is at a minimum.”