Lebanon struggles to cope with COVID-19 amid financial crisis

As Lebanon reels under the brunt of the worst financial crisis in its recent history, the government struggles to provide the necessary equipment to be able to cater for a potential increase in novel coronavirus cases. 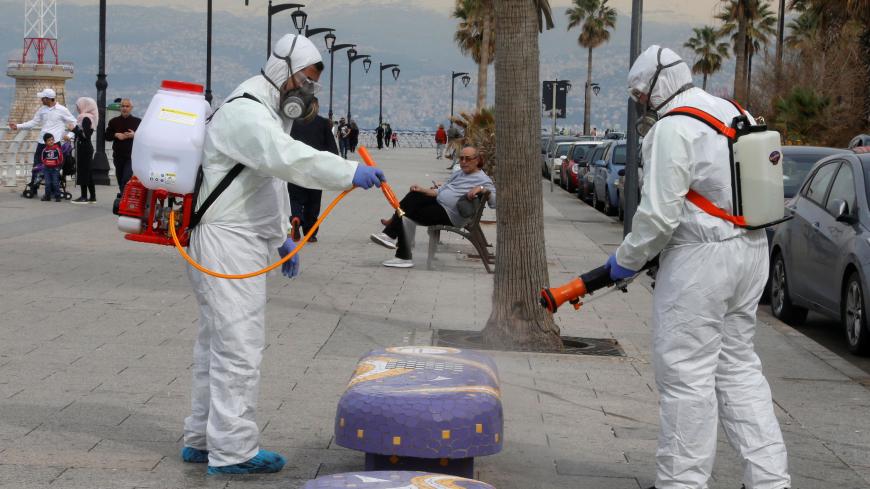 Employees from a disinfection company sanitize a bench as a precaution against the spread of the coronavirus, Beirut, Lebanon, March 5, 2020. - REUTERS/Mohamed Azakir

As Lebanon faces a harsh financial crisis crippling the state’s ability to face health crises, the Lebanese people are growing increasingly anxious about the novel coronavirus, which the World Health Organization has declared as a global pandemic.

Health Minister Hamad Hassan said March 13 that a state of health or civil emergency might be declared soon and that there were more cases to come. The ministry said the country had registered 96 cases.

The first case of the coronavirus was registered in Lebanon on Feb. 21. Twenty days later, the government decided to ban flights to and from Italy, South Korea, Iran and China. Also, it decided to give Lebanese citizens seeking to return to Lebanon four days to do so before it bans all travel to and from countries that have witnessed significant outbreaks of the coronavirus such as France, Egypt, Syria, Iraq, the United Kingdom and Spain.

The Education Ministry announced the suspension of studies at schools and universities, and the parliament building in Beirut's Nejmeh Square was closed for disinfection.

The tourism minister also asked owners of pubs and nightclubs and dance places in Lebanon to close for a week.

Meanwhile, bank employees are taking preventive measures, as they put on masks, wear gloves and use hand sanitizers on a daily basis. Banks have also decided to close today, March 14, to disinfect their buildings, and the central bank, the Banque du Liban, issued a statement saying precautionary measures were being taken insofar as banknotes are concerned in order to mitigate the spread of COVID-19.

The head of the Order of Nurses, Mirna Abi Abdallah Doumit, said 15 nurses have contracted the virus.

Salim Adeeb, a professor of epidemiology and community medicine at the American University of Beirut, told Al-Monitor that there have been three deaths in Lebanon due to COVID-19. He said the confirmed cases account for 15% of actual cases, which would mean that there are more than 450 undiagnosed cases in Lebanon.

He added that every infected person can infect two or three people on average.

A medical source told Al-Monitor that the Rafik Hariri University Hospital in Beirut has allocated 140 beds for coronavirus patients with a separate emergency entrance and corridor. The source, speaking on condition of anonymity, said that when nurses and doctors enter quarantine rooms, they put on N95 respirator masks and gloves and wear a special uniform that they throw away at the end of their shift. The hospital also provides all sorts of sterilization tools, including those nurses use for showering before leaving the hospital. A group of 14 medical students from the Lebanese University volunteered to work with the medical staff at the hospital.

Suleiman Haroun, the president of the Syndicate of Private Hospitals, told Al-Monitor that it is impossible to fully dedicate hospitals for the treatment of coronavirus cases as hospitals receive about 8,000 patients on a daily basis, some of which are serious cases.

Asked about respirators, he said there are 850 devices in hospitals, 10% of which are not operational because they need spare parts. This, he said, leaves Lebanon with roughly 750 devices, of which 500 are for ordinary patients and 250 for coronavirus patients.

Salma Assi, a representative of the group of importers of medical supplies and tools, which includes 70 companies, also told Al-Monitor that hospitals have 850 respirators, and that warehouses do not have backup supplies in case more cases are confirmed.

Haroun said he has proposed the reopening of previously closed private hospitals and state-owned hotels in order for these to be used as quarantines. He also asked four major hospitals to open their laboratories for coronavirus tests, which are now performed at the Rafik Hariri University Hospital for 150,000 Lebanese pounds (around $100).

He added that the Cabinet took a decision to allocate a ward for coronavirus patients at each and every one of the government hospitals spread across Lebanon's governorates, but he pointed out that even the largest private hospital in Lebanon would be unable to dedicate more than 20 beds to COVID-19 patients.

Assi said there aren’t enough gloves and masks to deal with the crisis, and that if companies want to import new ones, their prices will be high. She said hospitals need medical supplies worth $20 million a month, but due to the financial crisis in Lebanon, hospitals have over the past five months only been able to transfer $10 million to importing companies.

A Health Ministry source told Al-Monitor that the World Bank agreed to give the ministry a loan of $120 million and that the ministry will allocate $39 million of the loan to confront the coronavirus by equipping government hospitals, diagnosing and treating COVID-19 patients and buying medicines.

Adeeb stressed the importance of compulsory quarantine for people coming from countries that have witnessed significant outbreaks of the virus, and pointed out that there are a lot of people who did not respect self-imposed quarantines due to their limited financial means. The Health Ministry is asking citizens to isolate themselves in a room and use a private bathroom; however, there are many people who live in two-bedroom apartments with their families.

He said the ministry should offer an empty hotel to all individuals suspected of having the virus.

Adeeb said that experiments to develop a vaccine for the virus will take a long time, and that the number of cases will keep increasing in Lebanon until a “peak of infection” is reached. The rate of new infections will subsequently begin to decline on a daily basis, as is currently happening in China.

Banking and Finance
Economy and trade
Health and medicine