Egypt's health practitioners say protective gear shortages are putting them at risk during the COVID-19 pandemic. 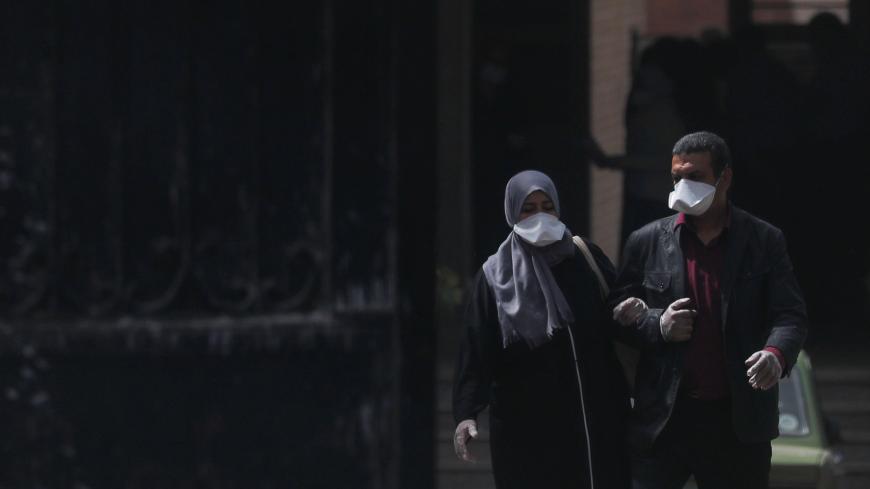 A man and a woman wear protective masks amid concerns over the coronavirus disease (COVID-19) as they walk from the main gate of a hospital in Cairo, Egypt, March 31, 2020. - REUTERS/Amr Abdallah Dalsh

Public service announcements on Egyptian TV pay tribute to Egypt's so-called White Army of nurses and doctors, hailing them as heroes. But the medical personnel on the front lines in Egypt's fight against the COVID-19 pandemic are speaking out against negligence in public hospitals and how the health system is ill-prepared to deal with the coronavirus. They lament the lack of testing and say a shortage in medical supplies and protective gear is endangering their lives and their families' lives.

On social media, some health practitioners have accused hospital administrators and the authorities of covering up the extent of the outbreak to prevent public panic.

"They have since been isolated and the hospital has been sterilized," he said. "Only the outpatient clinic remains open."

But a video published by Mohamed Salah Gaber, a nurse at the NCI, on his Facebook page the same day belies those claims. The video, which has circulated widely on social media, shows the hospital's staff protesting in the hospital's hallway, demanding that they be tested. "You don't care about us, but we fear for our lives and our families," shouts one nurse. Abul Qassem tells them he has requested 500 testing kits from the Health Ministry and is awaiting a response.

"The NCI staff have not been tested for COVID-19, nor was the hospital closed on April 3," the April 5 statement read. "Those infected received no support from NCI's management. After suspecting they had contracted the coronavirus disease, they quarantined themselves." The NCI nurses blamed NCI management for the spread of coronavirus infections among the center's medical staff.

"Had they heeded our calls to close the hospital for a few days and have it sterilized after a patient in the emergency ward was suspected of being infected with coronavirus, this would not have happened. We were told that if we are unhappy with the status quo, we should quit," they said.

Nurse Sayed Mahmoud rebutted the accusation that he was the source of the infections at the hospital. He said the infections were the result of "negligence" on behalf of hospital management.

"The NCI management turned down doctors' requests to have the sick patient tested despite the fact that she had all the symptoms of coronavirus," Mahmoud, now quarantined in the May 15 public hospital, said in a telephone interview broadcast on al-Haddath satellite channel April 4.

"We were extremely worried because of the lack of protective measures against coronavirus at the hospital," he said. "We only have surgical masks and gloves, which aren't enough to protect us against the virus. Some of the doctors bought N95 masks that they paid for from their own pockets."

Responding to the nurses' complaints, Cairo University launched an investigation into the incident. "Anyone found guilty of negligent conduct will be punished," said Cairo University spokesman Mahmoud Alam El Din.

President Abdel Fattah al-Sisi gave directives April 5 to the Ministry of Health to have all medical staff and patients at the NCI tested immediately, a decision hailed by the NCI doctors and nurses as a "victory."

"At last, our voices have been heard! Those are the right measures to take," Maggie Mousa, an anesthesiologist at NCI, tweeted in response to Sisi's directive. She told Al-Monitor over the phone, though, that she had not been tested.

Mousa, who is self-isolating at home, had previously criticized the Egyptian health care system.

"I am not proud to be part of a [health] system that has failed to protect its health practitioners," she tweeted April 3. "The NCI has helped the virus spread among doctors, exposing us, our patients and their families to the risk of illness. This is the result of poor management, arrogance and negligence."

Dr. Ibrahim al-Zayat, a member of the Egyptian Medical Syndicate, welcomed Sisi's decision, saying it was "better late than never." He said that a total of 27 doctors and nurses from NCI were now quarantined at al-Agouza Hospital after 10 more NCI staff members had contracted the coronavirus.

Cairo University, however, put the NCI coronavirus toll at 19, but that was before any tests had been conducted. Zayat added that plans were underway to form a "specialized crisis management committee" made up of physicians and health experts "to protect health practitioners and ensure they are not exposed to unnecessary risk, as has happened in the recent NCI crisis."

The nurses' outcry over the NCI infections came as Egypt witnessed a spike in coronavirus cases, which by April 5 surpassed the "danger limit" of 1,000 cases set by the Health Ministry to enforce stricter restrictions. The government imposed a partial nighttime curfew, closed schools and universities, and banned public gatherings, including communal prayers at mosques and churches.

The ministry earlier warned that if the number of confirmed coronavirus cases in the country exceeded 1,000, it would have to implement a total lockdown. By April 7, Egypt had reported 1,450 confirmed cases, including 94 fatalities, with the curve continuing its upward trend. But authorities have not followed through on enforcing a lockdown.

Egypt sent two military aircraft loaded with medical supplies to Italy on April 4 — a move that drew criticism on social media. The presidential office said the supplies, which included protective gear and disinfectants, were delivered by Health Minister Hala Zayed "in the spirit of solidarity."

One Egyptian Facebook user shared a video of the Italian foreign minister greeting Zayed at the airport and lamented, "I have not seen other health ministers fly to give medical supplies to other countries, especially when those are badly needed in their own countries. They are all busy trying to stock up on medical supplies, ventilators and protective gear for their own people. This comes at a time when Egypt's doctors are in bad need of protective gear, in addition to the ongoing NCI crisis."

Decades of underinvestment in Egypt's health sector have left many public hospitals dependent on donations for medical supplies and equipment. But the donations are not forthcoming.

This past week, prominent businessman Hussein Sabbour sparked controversy after calling on Egyptians to return to work immediately. "It is better [for the country] to forsake some lives than for Egypt to go bankrupt," he told Youm7 news portal. "If we stop working, the economy will go into recession. We are a weak country and have reached our limits."

Asked if he would donate money to help the government cope with the crisis, the manager of one of Egypt's leading real estate developers said he would not, as "paying my employees is a priority."

But Zayat stressed, "We are all in the same boat together."

"Now is the time for selfless acts. We must help each other through this crisis or else the consequences will be dire," he said.