The number of COVID cases has increased steadily in most of the cities and towns of Daraa during the past few weeks amid a deteriorating health sector. 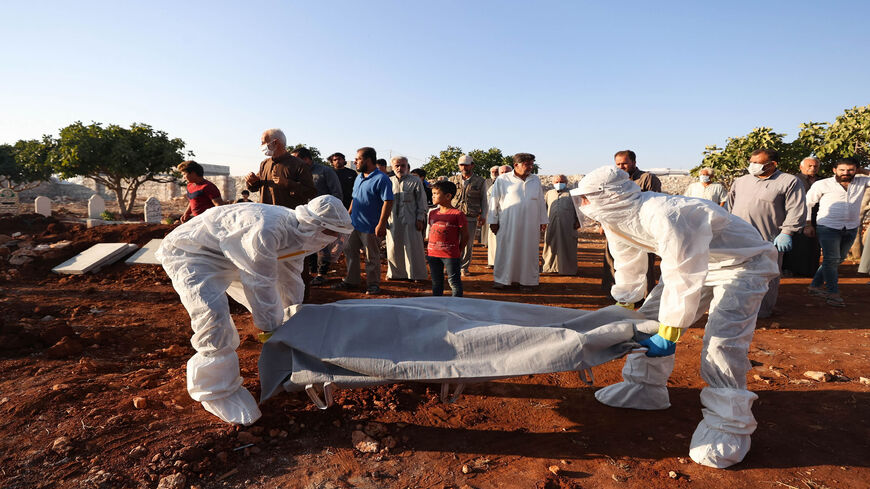 Paramedics transport the corpse of a Syrian who died of the coronavirus during a funeral in the village of Barisha, Idlib province, Syria, Sept. 30, 2021. - Omar Haj Kadour/AFP via Getty Images

According to several medical sources in Daraa province, southern Syria, the number of registered coronavirus cases have exceeded 52,000 infections from the beginning of October until Nov. 17.

This surge in infections comes amid a collapsing health sector in the province, and the medical centers’ inability to contain the pandemic and provide basic health services, prompting them to launch popular initiatives to collect donations in a bid to secure the necessary treatment supplies.

According to local media organizations, the number of COVID-19 cases during the same period last year were not as high, taking into account that most probably the current number of infections and deaths are higher than those announced by the Health Ministry in the Syrian government.

Daraa 42 media network reported that the increasing number of cases has resulted in isolation centers being fully occupied, and that many locals are reluctant to be admitted to government hospitals opting to stay at home instead.

Amer al-Hourani, spokesman for the Ahrar Houran Media Network, told Al-Monitor that the number of infections declared by the Health Ministry seem to be much less than the number of active severe cases suggest, amid shortages in the number of hospital beds and oxygen supplies at government-run hospitals, and the low vaccination rate.

“The minister’s official numbers do not reflect the reality on the ground if you compare that to the obituaries and cases shared on social media by locals in every area on a daily basis,” Hourani said.

He noted, “Many people lie about the cause of death of their relatives or deny being infected so they can keep seeing people and go to work, or for fear of being isolated once their friends or relatives find out that someone in a certain family died of COVID-19. This complicates the registration of the actual number of deaths and infections."

Hourani criticized the Syrian government for organizing the “Festival of Loyalty” in central Daraa province Nov. 16, to celebrate the 51st anniversary of the “corrective movement,” with thousands of people, “who were not committed to social distancing and wearing masks, and no regard whatsoever to the surge in cases.”

Ali al-Nawawi, a resident of the city of Nawa, the largest city in Daraa, told Al-Monitor that 20 people of the thousands of infected have died since the beginning of November, amid a lack of capacity in medical isolation centers in the city with a population of more than 100,000.

“This is not to mention the absent Syrian government that did not take any preventive measures. Most patients at Nawa National Hospital are being transferred to private hospitals in the capital, because of the lack of hospital beds and oxygen supplies,” he added.

At the end of 2020, the number of coronavirus cases across Daraa province increased dramatically, prompting locals to launch initiatives aimed at collecting monthly donations in a bid to restore out-of-service hospitals and medical centers, and purchase oxygen cylinders and medicines.

Mohammad al-Amer, who is one the locals in charge of these popular initiatives, told Al-Monitor, “In mid-December 2020, there had been a surge in cases in Daraa that prompted several individuals from so many areas to take the initiative to form committees to collect donations from residents and expatriates in order to purchase oxygen cylinders, the price of which reach 450,000 Syrian pounds [$150 at the black market rate as of the time of writing] for one unit and 10,000 pounds for a refill [$3 at the black market rate]. Those were offered to those infected and who could not afford being admitted to hospitals.”

Among the prominent initiatives in the province, the Inkhil city council, in cooperation with the town’s Technical School, manufactured 25,000 masks that were distributed to people for free.

The residents of Jasim city reconstructed the damaged Jasim National Hospital, with one resident of Tasil town donating funds to purchase an oxygen generator worth 150,000 pounds ($50 at the black market rate).

Early this year, the locals in the city of Nawa collected 80 million Syrian pounds ($24,000 at the black market rate)  in a fundraising campaign they launched to fix some malfunctions in the oxygen units of Nawa National Hospital.

Meanwhile, the residents of al-Hirak city and nearby towns collected some 60 million pounds ($18,000 at the black market rate) to repair the National al-Hirak Hospital, which had been closed since 2018, in late October 2021.

Before the regime regained control of Daraa in July 2018, 44 hospitals and clinics were set up within the Syrian opposition-controlled areas in the province, where most of the medical services were provided free of charge for several years. Some 600,000 civilians received medical services.

A doctor in Daraa, who refused to be named for security reasons, told Al-Monitor, “The number of hospitals and medical points in the opposition-held areas in Daraa has decreased after the regime retook the area. Many of the medical units were bombed or looted, which had extremely negative repercussions on the province’s health sector that hit rock bottom. All medical services were limited to Basra al-Sham Hospital, east of Daraa, and Tafas Hospital, in the west of the province.”

He said that data from the World Health Organization shows that only 58 public hospitals are fully functional out of the total 111 governmental hospitals in Syria.

“Up to 70% of health workers have left the country as migrants or refugees. Those who stay are often harassed by political or military parties that often interrupt their work,” he added.

Majd al-Hariri, who recently recovered from a coronavirus infection, told Al-Monitor that locals can no longer afford the private hospital expenses that could exceed 1 million pounds per day ($300 at the black market rate), whether in Daraa or Damascus.

In light of the deteriorating health situation, several activists in Daraa launched a campaign dubbed “Protect Daraa,” whose goal, according to the people in charge of it, “is to protect our loved ones, and to stop the virus’ fast spread by raising awareness among locals on the need to keep wearing masks, social distancing and regularly washing their hands.”

The current COVID-19 wave is stronger than previous ones given the carelessness among the majority of the population, who continue to hold funerals and weddings. Although the current situation seems dire, there doesn’t seem to be any measures of lockdown or restrictions that will be implemented any time soon. 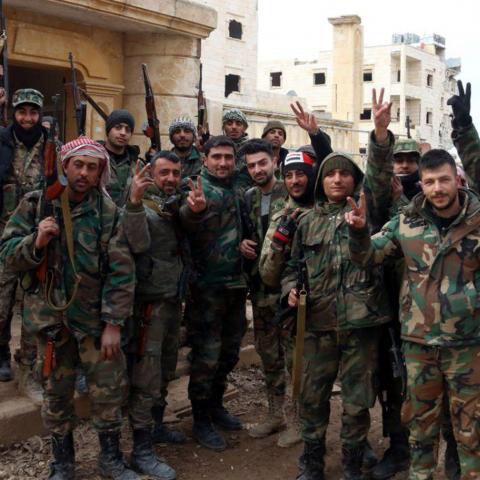 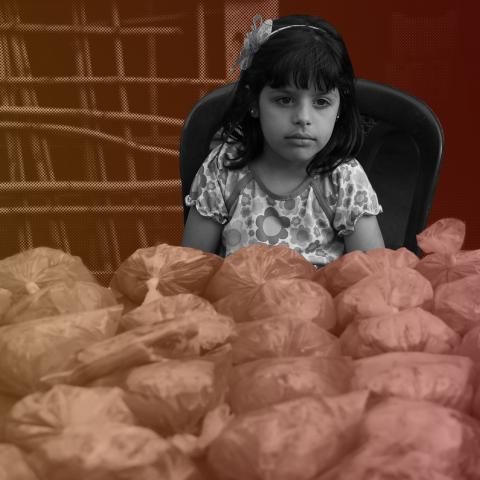