The lockdown, which runs through Feb. 1, mandates an overnight curfew and the closure of most businesses. 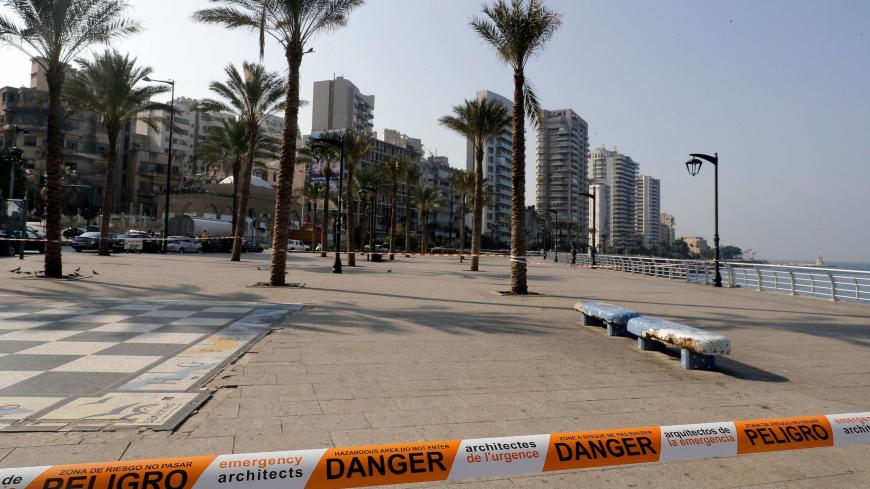 The usually crowded seaside promenade is deserted during a lockdown imposed by the authorities in a bid to slow the spread of the coronavirus, in the Lebanese capital, Beirut, on Jan. 7, 2021.

Lebanon entered a three-week nationwide lockdown on Thursday, in what the government hopes will stave off a surge in infections and hospitalizations that could overwhelm a health care system already under strain.

The restrictions, which include a curfew from 6:00 p.m. to 5:00 a.m., will last through Feb. 1, caretaker Health Minister Hamad Hasan said on Monday. Restaurants are closed for in-person dining, and schools and universities must operate remotely.

Under the new rules, traffic will be limited by alternating the days on which odd- and even-numbered license plates are allowed on the road. The Rafic Hariri International Airport in Beirut will operate at a reduced capacity.

The 25-day lockdown marks Lebanon’s third this year. The small Mediterranean country imposed a lockdown in March, during which citizens and residents could leave their homes only for food and essentials. In November, Lebanon implemented a two-week lockdown as the availability of hospital beds waned and the caseload spiked.

Lebanon, with a population of some 6 million, has registered close to 200,000 COVID-19 cases and more than 1,500 deaths. The Health Ministry on Wednesday announced a daily record of 4,166 infections.

Hasan, the health minister, said Lebanon will receive 2 million doses of the Pfizer-BioNTech vaccine by February — enough to immunize up to 20% of the population. Last month, Hasan confirmed that Lebanon had detected the new coronavirus variant in a patient who traveled to the country from London on Dec. 21.

Health officials are warning the surge in new infections could overwhelm hospitals already low on beds. An official with the American University of Beirut Medical Center told L'Orient Today on Wednesday that his hospital has reached full capacity.

Lebanon is dealing with its worst economic crisis in decades and is still reeling from an explosion in Beirut this August that caused billions of dollars in damage and left more than half the city’s hospitals unable to function.