The news of infections in the Syrian refugee community follows a handful of cases among Palestinian refugees last month. 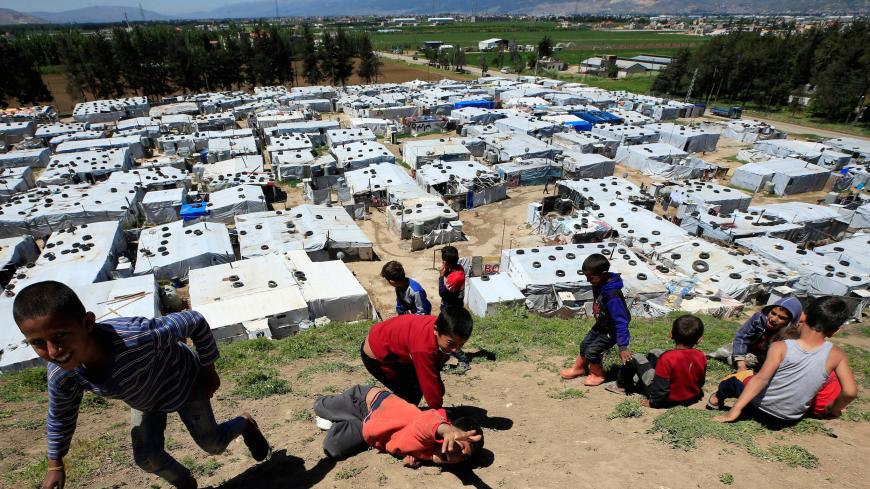 Syrian refugee children play together, as Lebanon extends a lockdown to combat the spread of the coronavirus at a Syrian refugee camp in the Bekaa Valley, Lebanon, May 7, 2020. - REUTERS/Ali Hashisho

More than a dozen refugees in eastern Lebanon have tested positive for the coronavirus. The news follows a handful of virus cases last month in the impoverished community.

There were 15 confirmed cases of COVID-19 among Syrian refugees in Majdal Anjar near the Syrian border as of yesterday, a UN spokeswoman told Al-Monitor. The individuals live in the same building. There was only one confirmed COVID-19 case among Syrian refugees before the ones in Majdal Anjar, and this person living in northern Lebanon has since recovered, the spokeswoman said.

In April, five COVID-19 infections were confirmed in a Palestinian refugee camp in eastern Lebanon.

The news shows the vulnerability of Lebanon’s large refugee population. The country hosts more than a million Palestinian, Syrian and other refugees, many of whom live in crowded, poor conditions.

The International Rescue Committee, a humanitarian nongovernmental organization, reported that 90% of Syrian refugees they surveyed in April said they are “in critical need of food.” This figure was only 32% in March, a spokeswoman for the organization told Al-Monitor.

Many refugees in Lebanon also lack access to soap and other hygiene materials effective at fighting the virus.

Lebanon overall has had relatively few cases of the virus. To date, there have been 1,168 total cases, according to the Ministry of Public Health statistics. This includes seven cases on May 27. There was a big jump on May 21, however, with 62 confirmed cases, the statistics show.

The virus and accompanying closures have severely damaged Lebanon’s already fledgling economy, however. Salaries have been cut and banks are restricting the amount of money customers can withdraw.