The four infected individuals are relatives of the first refugee woman who tested positive for the coronavirus in a Palestinian refugee camp this week. 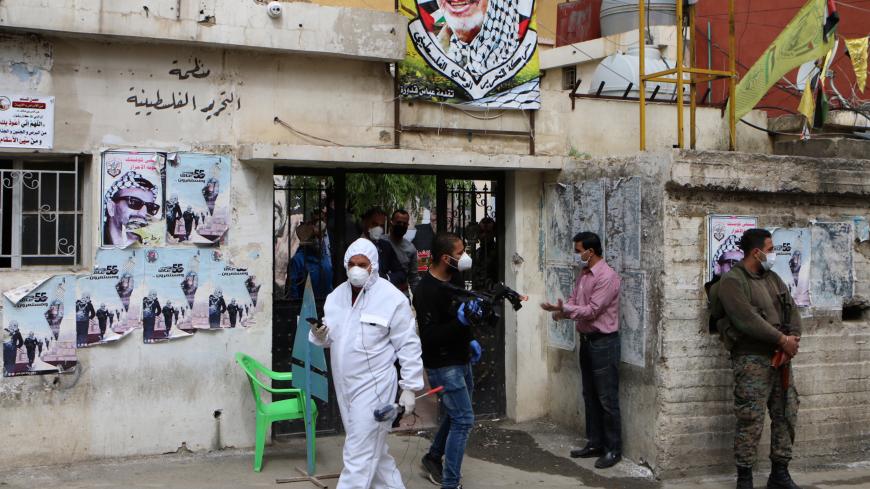 A health worker and armed Palestinians gather under the portrait of their late leader Yasser Arafat at the Wavel Palestinian refugee camp (also known as the Jalil camp) in Lebanon's eastern Bekaa Valley, on April 24, 2020, after cases of infection by the novel coronavirus were detected there. - AFP via Getty Images

Lebanon has recorded four new coronavirus cases in a Palestinian refugee camp, raising fears the virus could spread widely in the vulnerable community.

A Palestinian woman became the first refugee in the country to test positive for the virus on April 22. Now, four of her relatives in the camp in eastern Lebanon have also tested positive for the virus, The Associated Press reported April 24, citing the United Nations Relief and Works Agency for Palestine Refugees in the Near East.

Lebanese authorities have since closed off the camp. The four infected individuals do not require hospitalization and are isolating at home, according to the AP.

The cases stoke already present fears that the highly contagious coronavirus could wreak havoc in Lebanon’s refugee community, which includes more than 1 million Syrians and hundreds of thousands of Palestinians. The Palestinians came after the first war between Israel and Arab states in 1947. Many live in crowded camps with poor living conditions and little income and are generations removed from the original exodus.

Following news of the first case, the International Rescue Committee — a nongovernmental organization working in the country — released survey findings that reported a majority of refugees in Lebanon lack access to soap and other hygiene products. Some Syrian refugees in Lebanon told Al-Monitor they are not able to afford hand sanitizer and other cleaning materials.

Lebanon has otherwise received praise for the relatively low number of confirmed coronavirus cases in the country of more than 6,000,000. Lebanon has also grappled with a fledgling economy and subsequent protests for months. There are currently 696 confirmed coronavirus cases in Lebanon, according to the Ministry of Public Health. This includes six new cases in the last 24 hours, meaning two people outside of the refugee camp also tested positive for the virus in that time frame.

The Lebanese government imposed a curfew in March to slow the virus’ spread. There has also been a spike in domestic violence since then — a concern for other countries in the region as well.

Lebanon’s parliament reconvened on Tuesday for the first time in a month, adhering to anti-coronavirus measures for members.