As politicians skip the line to receive their coronavirus vaccine, questions arise about the quantity of vaccine doses Lebanon has and will receive and if it’s enough to inoculate the local and refugee population. 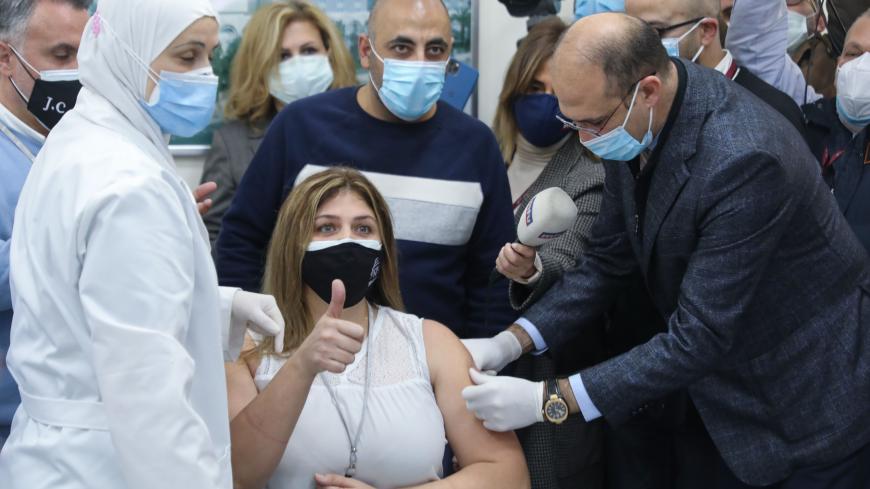 Lebanese Health Minister Hamad Hassan administers a dose of the COVID-19 Pfizer/BioNTech vaccine to a member of the health care staff at the Rafik Hariri Hospital in the capital, Beirut, on Feb. 14, 2021, as the country began its inoculation campaign. - ANWAR AMRO/AFP via Getty Images

Lebanon has recorded 359,320 cases of the virus, with 4,446 deaths, according to the World Health Organization figures.

But no sooner had the vaccination plan been announced that scandals began to erupt. On Feb. 19, the Health Ministry said it had halted accreditation for the Rayak Hospital in the town of Baalbek (60 kilometers, or 27 miles, from Beirut) as a COVID-19 vaccination center due to “its violations of the priorities and standards set in the national vaccination plan.” The ministry’s decision came after the publication of photos of citizens receiving their vaccinations before their turn arrived.

On Feb. 23, reports emerged that a number of parliamentarians had been inoculated in parliament, not in a designated center accredited by the Health Ministry. The 16 members of parliament were also accused of jumping the line despite prioritization for medical health workers and the elderly in the first stage of the vaccination drive. The World Bank threatened to suspend its funding for Lebanon’s vaccination campaign over these violations.

Of note, the World Bank approved on Jan. 21 a $34 million loan to fund Lebanon’s vaccination drive. In a Feb. 17 statement, the World Bank vice president for the Middle East and North Africa region, Ferid Belhaj, said, “We will monitor fair and transparent distribution to priority groups as agreed with the government. Raising awareness, encouraging people to register, and ensuring fair & transparent distribution are key to make this a real success.”

Following the reports of the parliamentarians receiving the vaccine, the media office of the Lebanese presidency announced that President Michel Aoun and his wife got inoculated, along with 10 of his close associates.

The deputy speaker of parliament, Elie Ferzli, told Al-Monitor that “25 members of parliament have contracted coronavirus so far,” adding, “The Public Health Ministry has followed up on these cases via the adviser to the health minister. Representatives of the International Federation of Red Cross and Red Crescent Societies (IFRC) were present on the day the parliamentarians received their vaccines — they are assigned by the World Bank to monitor the vaccination process.”

Caretaker Minister of Public Health, Hamad Hassan, had allowed lawmakers to receive COVID-19 shots "to thank them for passing an emergency law", as he explained in an interview with Tele Liban. "MPs who received the vaccine did not take the turn of others. They were registered on the platform, and their vaccination was not random at all," he affirmed.

The Health Ministry had created a vaccination platform for citizens to register their names to receive the vaccine, and said the vaccine is free and will be available to all residents in Lebanon. The ministry aims to vaccinate 70% of the population this year and next.

But a study by the Crisis Observatory at the American University of Beirut warned that Lebanon will not reach herd immunity before June 2025.

On Feb. 13, Lebanon received the first batch of 28,500 doses of the Pfizer-BioNTech vaccine from Belgium.

Fadi Sanan, the director general of Health Ministry, told Al-Monitor, “Any person on Lebanese territories can register on the platform to receive the vaccine.”

He said, “The ministry will not differentiate between Lebanese citizens and other nationalities. This is a health right for everyone.”

On Feb. 17, Hassan welcomed Russian Ambassador to Lebanon Alexander Rodakov and discussed methods to bring the Russian Sputnik V vaccine to Lebanon. Sanan said, “The talks about bringing the [Russian] vaccine to Lebanon through the Health Ministry and the private sector have progressed.”

He also said, “As of the end of this week [first week of vaccination], 22,000 citizens have received the vaccine. The other batches of the Pfizer vaccine will arrive consecutively and increase gradually in the coming weeks.”

Abdul Rahman al-Bizri, the head of Lebanon's National Committee for the Coronavirus Vaccine, said in a Feb. 22 press statement, “We need 10 to 11 million doses of vaccines and we have so far secured 6.3 million of them. We will try to get more doses through donations from civil society and the industrial, bank and technical sectors.”

The Health Ministry has reserved 2.1 million Pfizer-BioNTech doses, and the first five batches were to arrive weekly as of mid-February as follows: 28,080 during the first week, 31,590 during the second week, 41,120 during the third week, 32,760 during the fourth week and 36,270 during the fifth week. Negotiations are currently underway with AstraZeneca to reserve 1.5 million doses.

Sharaf Abu Sharaf, head of the Order of Physicians, told Al-Monitor, “The current vaccine amounts are enough to vaccinate 50% of the Lebanese population by the end of 2021. We need to vaccinate 80% to achieve herd immunity. I hope the Russian and Chinese vaccines will meet the required needs.”

He added, “50% of doctors, i.e., about 5,000, received the vaccine so far. Doctors are encouraging people in their clinics and during conferences to take the vaccine.”

On the reports of violations, Abu Sharaf said, “I disagree with the exceptions happening in the vaccination campaign. Priority should be given to the rest of the medical corps, as well as the elderly and people suffering chronic diseases.”

A medical source at Dar al-Amal Hospital in Baalbek told Al-Monitor that the hospital has received the vaccine, and that the medical staff has been inoculated. He added, “The hospital can do 198 vaccines per day.”

What of Syrian refugees in Lebanon? Dalal Harb, a spokeswoman for the UN refugee agency, UNHCR, told Al-Monitor, “The vaccines for the Syrian refugees and the Lebanese people are the same. According to the Health Ministry's national Vaccination plan, they have to register and wait for their turn, as per the criteria specified by the ministry over four phases.”

The first phase of the vaccination campaign targets medical staff and people over 75, while the other phases target prisoners, teachers and other labor sectors.

Harb added, “Refugees are using the same vaccination centers as the Lebanese people, and the UNHCR supports awareness campaigns, helps refugees and answers their questions. No one is safe until everyone is safe. This applies to the vaccine as well.”

She added, “Since the first COVID-19 case was confirmed among Syrian refugees in Lebanon in April 2020, 3,046 cases have been recorded so far [among the refugees], including 2,762 living in urban settings, 92 currently hospitalized and 138 deceased patients.”

It seems the situation is the same for Palestinian refugees when it comes to the vaccine. Majdi Karim, executive director of Al-Shifaa Association for Medical and Human Services, who manages seven dispensaries that cater to the Palestinian refugee camps in the north, south, Baalbek, Sidon and Tyre, told Al-Monitor, “Numbers of infected people are on the rise in Palestinian camps, especially in south Lebanon. The UNRWA has encouraged the refugees to take the vaccine because it is the only way to stop the outbreak of this dangerous pandemic.”

Karim said, “According to the latest updates Feb. 16, the cumulative number of cases [among Palestinian refugees] amounted to 5,872, including 1,059 active cases, 133 hospitalized cases and 195 fatalities. The percentage of fatalities is 3.3%, which is high. Therefore, it is necessary to abide by the precautionary measures and social distancing and to take the vaccine.”

He added, “Palestinians are being vaccinated through cooperation and coordination between the UNRWA and the Health Ministry. Vaccination of medical staff and people 75 and up has started at the Saida Governmental Hospital.”

He added, “Ten coronavirus cases were recorded in a week among aid workers from the association in Ain al-Hilweh camp. It is important to administer the vaccine to curb the intensity of infections. Hospitals in Lebanon have reached their maximum capacity, and some patients are receiving treatment in ambulances. Al-Shifaa Association is supplying oxygen to the houses of patients with mild and middle coronavirus infections. Al-Aqsa Hospital in Ain al-Hilweh has also been equipped, in cooperation with the Green Crescent and the Palestinian Civil Defense, to offer the necessary health care and medical services to coronavirus patients.”