The Palestinian Ministry of Health in the Gaza Strip, in cooperation with the World Health Organization and UNRWA, launched the first phase of coronavirus vaccination for the residents of the Gaza Strip after receiving 22,000 doses of vaccines from Russia and the United Arab Emirates. 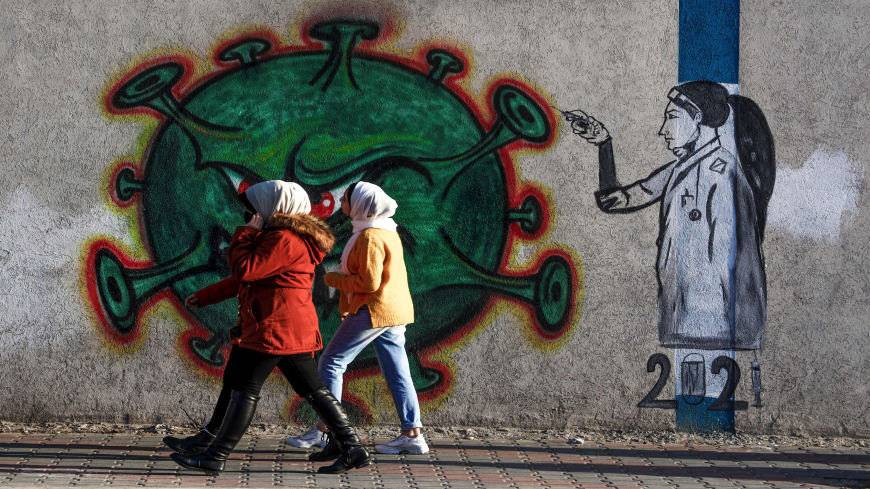 Palestinian women walk past a mural painting of a nurse injecting a vaccine to a COVID-19 virus in Gaza City, on Dec. 31, 2020. - MOHAMMED ABED/AFP via Getty Image

GAZA CITY, Gaza Strip — The first phase of the coronavirus vaccination campaign kicked off in the Gaza Strip on Feb. 22. Two shipments of the Russian Sputnik V vaccine arrived — the first donated by Russia to the Palestinian Authority (PA), and the second by the United Arab Emirates to the Gaza Strip directly.

The campaign began with the vaccination of 15 officials from the Ministry of Health and some medical personnel. The process was heavily covered by various media outlets, with the aim of encouraging the population to get vaccinated. Only about 10,000 persons registered to receive the vaccine in the first phase, out of 1.2 million citizens in the Gaza Strip who need it.

Overall, 22,000 doses of the Sputnik V vaccines reached the Gaza Strip, sufficient for 11,000 citizens, at the rate of two separate doses for each citizen. Spokesman for the Palestinian Ministry of Health in the Gaza Strip Ashraf Al-Qudra told Al-Monitor that none of the 15 first recipients, including himself, showed any side effects after getting their shots.

He pointed out that the Ministry of Health, in cooperation with the UNRWA, began vaccinating at two health centers in the south of Gaza and in Gaza City.

Abdel Nasser Soboh, the director of the WHO’s office in the Gaza Strip, told Al-Monitor on the sidelines of the launch of the vaccination campaign that the PA will receive in the coming days more than 37,000 new doses of vaccines. “The Gaza Strip will be getting 11,200 doses,” he said.

The surge in the number of coronavirus infections in recent months put the health system in the Gaza Strip under great pressure, bringing it to the verge of collapse.

Government authorities rushed to impose stringent preventive measures, including curfews and the closure of public places such as restaurants, wedding halls, sports clubs and others.

In light of the relative success of these measures, the Gaza Strip has been registering a drop in the number of cases (between 100 and 200 cases per day) for two weeks now. This drove expectations that the epidemic will be largely controlled in the coming months, with the supply of more vaccines and the vaccination of the population.

Since the outbreak of the virus in the Gaza Strip in March 2020, the enclave recorded more than 54,000 cases, with 52,000 recovered and 545 dead, most of them elderly and people with chronic diseases.

Director of the Infection Control Department at the Ministry of Health Rami Al-Abadleh, who received the vaccine in the first batch, told Al-Monitor he did not feel any side effects. He urged citizens to register via the Health Ministry’s online platform.

Abadleh said that according to the WHO’s protocol, every person 18 years of age and over needs to receive the vaccine to acquire additional immunity against the virus.

The few numbers — 10,000 so far — that were registered with the Ministry of Health to receive the vaccine are due to concerns over complications by the recently manufactured vaccine. Citizens also fear counterfeit vaccines that have begun to spread in some countries around the world.

Naji Audi, 38, from the northern Gaza Strip, is afraid of taking the vaccine. He told Al-Monitor, “I caught the virus last December. But I am afraid of the vaccine. It is new, and to this date, more tests are being conducted and modifications are being introduced to it. I am afraid that my body will not tolerate it and it would have severe side effects.”

Shadi Shatat, 58, who lives in Gaza City, shared Audi’s skepticism. He had read on the internet about some side effects of the Russian vaccine, which include joint pain, high temperature and headache. “I have arthritis. I do not need additional pain,” he told Al-Monitor.

The entry of vaccines into the Gaza Strip came despite Israeli difficulties and obstacles. On Feb. 15, Palestinian Minister of Health in Ramallah Mai al-Kaila accused Israel of preventing the entry of these vaccines into the Gaza Strip through the Beit Hanoun/Erez crossing in the northern Gaza Strip. This prompted Hamas and the Islamic Jihad to threaten military escalation against Israel. On Feb. 17, Israel allowed the entry of the vaccines.

Under pressure by the families of Israeli soldiers detained in the Gaza Strip, the Israeli government had banned the entry of the vaccine. These families demanded their government pressure Hamas to release the soldiers they've captured since 2014 — who are believed to be dead — in exchange for the introduction of vaccines.

The Ministry of Health in the Gaza Strip expects the numbers of those who will register for the vaccine to increase in the coming days and weeks. The ministry is organizing health awareness campaigns to encourage more people to get vaccinated, in the hope that all residents will be vaccinated before the end of June.