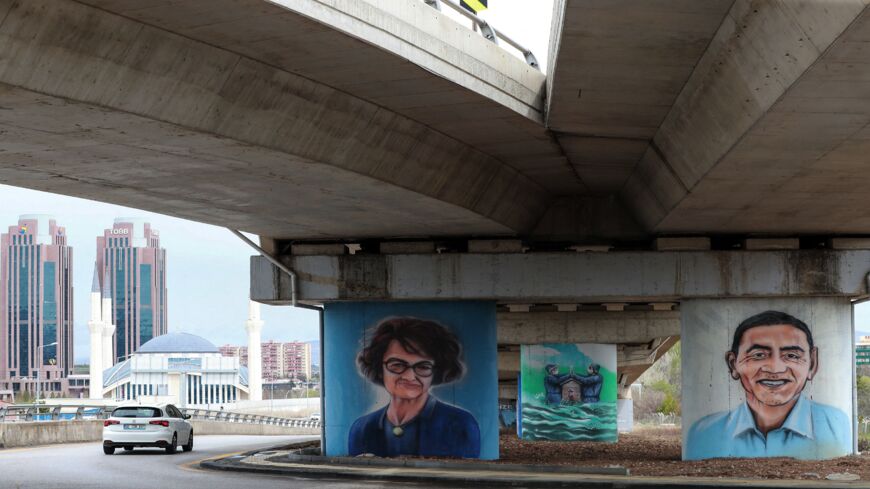 Ankara's Metropolitan Municipality paid tribute to Ozlem Tureci (L) and Ugur Sahin (R), the German couple of Turkish origin who are behind the BioNTech firm that developed a successful vaccine with US giant Pfizer, as part of a series of graffiti dedicated to the efforts of health care workers during the COVID-19 pandemic in the City Hospital region of the Turkish capital, Ankara, on April 19, 2021. - ADEM ALTAN/AFP via Getty Images

"We are at the last stage for Sputnik V vaccine emergency-use authorization and made a deal for its procurement. Turkey signed a deal to receive 50 million doses within six months," Koca said in a televised speech.

Some 13.55 million people in the country of 83 million have received their first jab of either the Chinese-made Sinovac or the US-developed Pfizer-BioNTech vaccine. On Monday, a Turkish pharmaceutical company announced it would begin local production of Russia’s Sputnik V vaccine.

Koca said in televised remarks that health officials were lengthening the recommended period of time between the first and second jabs of the Pfizer-BioNTech vaccines, raising the wait period from four weeks to six to eight.

"The vaccine supply [will be] getting more difficult over the coming two months, but we expect it to become more abundant thereafter," Koca said.

On Thursday, Turkey will enter a 17-day lockdown aimed at curbing a new surge of COVID-19 infections. Residents are required to stay indoors unless making a necessary shopping trip or seeking urgent medical treatment, and schools will return to online learning.

Turkey ranks fourth in the world in new daily coronavirus cases per capita. The Health Ministry on Wednesday confirmed 40,444 new infections and 353 deaths, raising the total since the beginning of the pandemic to more than 4.7 million cases and nearly 40,000 deaths.

At least five people in Turkey are infected with the strain of the virus detected in India, Koca said on Wednesday. India has emerged as a new coronavirus hotspot, registering an average of 300,000 new infections per day.