Anti-government protests have largely subsided in Lebanon due to government measures aimed at containing the spread of the novel coronavirus, but some activists continue to spread the message and are optimistic about the movement's future. 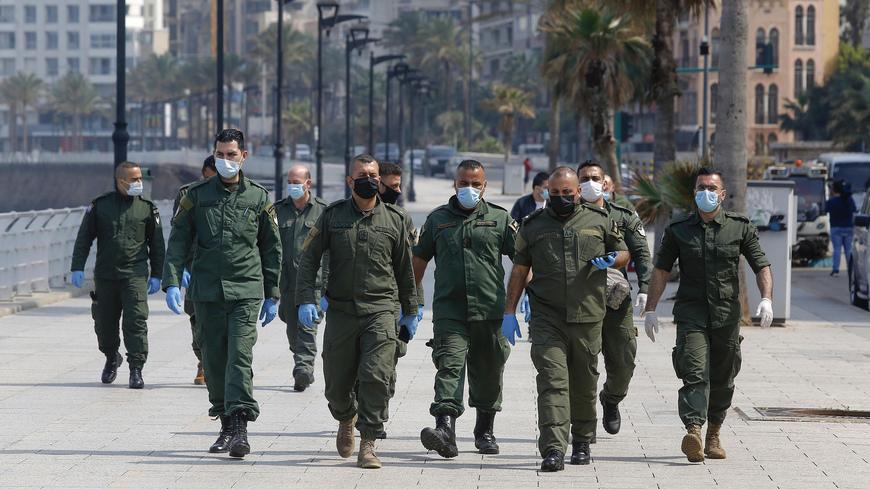 BEIRUT — Months after hundreds of thousands of people descended on Martyrs’ Square in Beirut to protest Lebanon’s sectarian political class, security forces forcibly destroyed the last few remaining tents in the city center on March 27. The reason given was the implementation of a curfew from 7 pm until 5 am, the latest measure enacted in Lebanon to limit the spread of the novel coronavirus, COVID-19.

“They didn’t warn us before. They attacked suddenly,” artist and protestor Hady Ezzeddin told Al-Monitor. Ezzeddin had been camping in Martyrs’ Square for months, but said he was forced out during the March 27 raid. “I feel upset about what happened, and I feel surprised.”

Yet even before the forced eviction, Ezzeddin had been one of only 50 or 60 demonstrators left in the squares, according to his own count. Most activists, however, have moved on in the wake of the nationwide lockdown announced by the Lebanese government that culminated in the closure of the Beirut airport and seaports on March 18. As the crisis deepens, Lebanon’s once-boisterous protest movement is left to find new, creative ways to reach and engage the public amid a viral outbreak that has made it almost impossible to hold large-scale street demonstrations.

Limited protests had continued prior to orders issued by Lebanese Prime Minister Hassan Diab on March 21 allowing security forces to police social-distancing and isolation measures. Now protest organizers are relying on virtual gatherings and seminars to spread their message, and many have volunteered to disinfect neighborhoods and to provide vital support within their communities across the country.

Despite the tactical difficulties presented by the public health crisis, activists have remained focused on highlighting what they see as the government's inadequate response to the COVID-19 outbreak as well as Lebanon’s severe economic decline. Some believe that the squeeze of the compounding crises will soon drive people back into the streets.

“The coronavirus is a challenge for the protest movement in terms of us not being able to move, to mobilize people in the streets, and even to inform people about anything related to the political situation,” Zeina Helou, an independent researcher and activist involved in several protest groups, told Al-Monitor. “Now [people are] more in survival mode.”

Tarek Serhan, a protest veteran, told Al-Monitor, “Basically, when the virus thing started, we all began to focus on brainstorming, considering the [method] of protest we will use.” Serhan has been actively protesting since the 2015 demonstrations driven by the nationwide waste crisis.

On March 10, activists organized a human chain around the Palace of Justice in Beirut to protest the politicization of judicial appointments, but unlike past actions, the demonstrators wore masks and gloves and stood at a distance from one another to lessen the risk of possibly transmitting the coronavirus. After the government began urging people to stay at home, however, Serhan remarked, the movement’s focus shifted to social media, with activists live-streaming political discussions and educational sessions about the virus and its political dimensions, staging social media campaigns and conducting donation drives.

“Even the meetings of the groups have been changed, even the seminars we used to do in the square in downtown [Beirut],” Serhan said. He added that many activists have also been trained by the Red Cross “in case things get worse.”

Helou, a former secretary-general of the Lebanese Association for Democratic Elections, stated that despite the changes, activists have continued to engage in social assistance efforts to support those most vulnerable during the crisis, especially in places like the Chouf district and in Tripoli, Lebanon’s second largest and poorest major city.

Mohammad Shouk is the head of the Defenders of the City, a security and conflict-resolution group that started in Tripoli and now has branches across Lebanon. The group's original purpose was to protect demonstrators in Tripoli’s protest camp, but with the coronavirus crisis, it began sanitizing Tripoli’s neighborhoods using equipment it purchased.

“Naturally it’s a very big burden, but what can we do?” Shouk remarked. “We aren’t in a situation where we can do otherwise.” He said the Defenders had also distributed more than a thousand food rations to those in need in Tripoli and the neighboring district of Akkar. Group members are providing bread on a near-daily basis to the poor in Tripoli.

Helou further remarked, “Obviously this crisis has exacerbated the needs of people and the difficult situation they were facing even before the coronavirus, with a lot of people falling below the poverty line, even before, as a result of the economic situation and the failure of the government to provide any sort of basic needs — education, healthcare, etc.”

Lebanon had already been hit hard by multiple economic and fiscal crises before the coronavirus arrived, and with the country lacking a social safety net, the viral outbreak seems poised to push Lebanese workers and business owners to the brink. On March 24, a Beirut taxi driver, apparently frustrated at his inability to earn a living during the crisis, set his car on fire after reportedly being fined for violating the new social isolation measures.

The country’s health care system is in an increasingly dire state, according to a report by Human Rights Watch. All hospitals, public and private, face supply shortages and are unable to import equipment like ventilators, which are vital in caring for patients suffering from COVID-19.

Serhan said that a major goal of the protest movement’s messaging during the coronavirus crisis is to remind people of how the government had deepened their suffering even before the coronavirus arrived in the country, while also criticizing the state for what he claimed was its lackluster response during the first few weeks of the outbreak.

According to Mike Azar, a senior financial adviser in Lebanon, people are likely to grow angry, and rightly so, given the current situation.

Azar added, “People are starting to realize how lack of planning, which is fundamentally a lack of accountability by the political system, has a direct effect on their lives.”

But Sam Derbas, who had been active in demonstrations in Tripoli, admitted that because it is difficult to tell how long the coronavirus crisis will last, the future of the protest movement remained unclear in his view.

“The protest started to die before the virus,” Derbas told Al-Monitor. “Before the quarantine, Beirut’s downtown looked empty while only Tripoli had plenty of people.”

Yet Helou said that going forward, despite the destruction of the protest camp, activists might become “more aggressive” in targeting Lebanon's clientelist political system.

Some demonstrators stated they even felt reinvigorated by the evening raid on March 27.

“What the government did tonight may motivate others like it motivated me to go back to the streets after the quarantine finishes,” one participant in the protest movement, who wished to remain anonymous for security reasons, told Al-Monitor.

According to Serhan, despite the current lockdown, demonstrators are trying to plan events for the near future, like a “march of cars.” In the event that the outbreak soon tapers off, he said, protest groups are preparing for a potential resurgence of the movement in April and May.

Although his plans to occupy the square were upended, Ezzeddin said he was still confident the Lebanese revolution would continue, however long the current crisis lasts.

“Many people, they’ve already lost everything — their job, their [daily] life — and the [coronavirus] is making the situation worse,” Ezzeddin said. “So I think after the corona[virus] they must come to the street. They have no choice.”