Lebanon's wide protests are regaining steam and the streets are growing more violent as partisan loyalties foment conflict among the demonstrators. 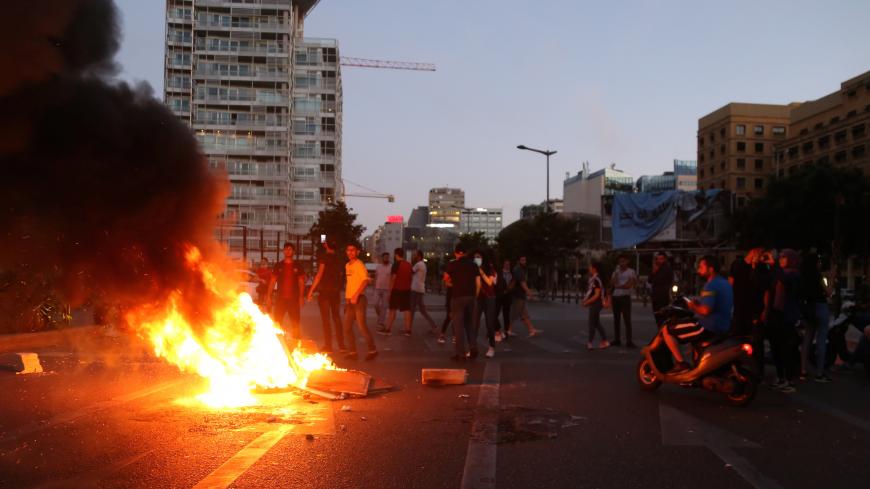 Demonstrators set fire during a protest over the collapsing Lebanese currency and price hikes, in Beirut, Lebanon June 11, 2020. - REUTERS/Issam Abdallah

BEIRUT — In front of burning tires and dumpsters, a group of young men stood blocking a major thoroughfare just south of Beirut’s Hamra district, less than three kilometers from Lebanon’s Parliament, on June 6. One of them poured gasoline on patches of plants nearby to burn them as well.

“We are not staying calm about our beliefs,” one of the protesters told Al-Monitor.

A few hours later, heavy gunfire erupted further southwest in Corniche el-Mazraa, which itself lies only three and a half kilometers from Beirut’s central district, where supporters of the majority-Sunni Future Movement clashed with the majority-Shiite, Hezbollah-aligned Amal Movement. Violence had also taken place earlier the same day in the majority-Christian Beirut suburb of Ain el-Remmaneh between locals and supporters of Amal and Hezbollah.

These events came on the heels of the largest protest gathering in Beirut since the start of Lebanon’s coronavirus lockdown earlier the same day, where attendees were far from united in their demands. While some protesters voiced long-held anti-establishment slogans, members of the political parties they were protesting against were present as well. Some groups called for the disarmament of Hezbollah — a controversial demand that was the original flashpoint for tensions.

According to analysts and protesters alike, the highly sectarian atmosphere that day and the ensuing partisan violence were the result of efforts by political factions to use the new wave of anti-government protests in Lebanon to their advantage. Large scale cross-sectarian protests made a sudden comeback across the country on June 11, but party officials have expressed worries that rapidly rising inflation and falling standards of living in the country mean it may soon become difficult to keep a lid on future low-level clashes if political actors continue to stoke social divisions.

“Everybody knew that on Saturday there was going to be a fight,” Ain el-Remmaneh resident Perla, who did not wish to provide her family name for security reasons, told Al-Monitor about the clashes downtown.

Ain el-Remmaneh was the site of an infamous massacre that many credit with setting off the Lebanese Civil War in 1975.

Following a standoff between supporters of Amal and Hezbollah and protesters in downtown Beirut over the demand to liquidate Hezbollah’s weapons, the supporters of the two majority-Shiite parties stormed Ain el-Remmaneh with “around 200” motorbikes, according to Elie Hindy, the executive director of the research center for the majority-Christian Lebanese Forces party. Based on information available to the party, Hindy recounted that the outsiders faced off with a group of locals, some of whom were affiliated with the Lebanese Forces, and although shots were heard in videos of the altercation, he said there was no gunfire directed at either side.

The June 6 clashes in Ain el-Remmaneh were far from the first. Yet Perla stated that this time felt different.

“We were in the period of revolution, so people didn’t want to make it all politics,” she said. “But now you feel like the revolution has turned a bit political, so this time it was purely Lebanese Forces versus Hezbollah.”

The clashes in Corniche el-Mazraa were also not unprecedented. This time, though, the clashes between the Sunni and Shiite parties were reportedly precipitated by insults that supporters of Amal and Hezbollah had made against Ayesha, one of the Prophet Muhammad’s wives who is revered deeply by Sunnis, following the violence at the protest in downtown. Although no deaths were confirmed, the latest exchanges of gunfire reportedly left several injured.

“These sectarian clashes were well designed and implemented and part of countering these protests,” Sami Nader, the director of the Levant Institute for Strategic Affairs, told Al-Monitor.

Zeina Helou, a political activist and researcher who has been involved in Lebanese protest movements for years, told Al-Monitor that she did not feel comfortable with the call for Saturday’s demonstration for a number of reasons, including the increased role of political parties.

“I knew that many political parties were behind it and some new groups that are not very transparent,” Helou said. “I personally do not trust political parties, even those who are currently claiming they are outside the government and have joined the opposition.”

Helou also mentioned she does not support the demands of some groups within the demonstration for the implementation of the United Nations resolution mandating the disarmament of Hezbollah — a sentiment shared by some who were present at the protest in downtown.

“Some people of course feel strongly about it. However, today I do believe it’s a distraction,” protester Nadine Harb told Al-Monitor about the Hezbollah disarmament demands on June 6. “[Party loyalists] are trying to steal this protest and make it their own; they’re trying to make it political again.”

Calls to disarm Hezbollah play squarely into the group’s strategy, which, according to Nader, has sought to deflect populist challenges from protests by refocusing Hezbollah’s supporters’ attention toward sectarian fears.

“At first there was this conspiracy theory campaign. It didn’t work,” he said. “Then started the second wave of countering the revolution, which was to drag it into the sectarian conflicts, saying that this is aimed against the Shiites.”

According to Nancy Ezzeddine, an associate at the Lebanese Center for Policy Studies and a researcher at the Clingendael Institute in the Netherlands, parties like the Lebanese Forces and the Kataeb are able to avoid responsibility for Lebanon’s economic failures because they are neither present in the current government, nor were they in power when many ill-fated economic policies were undertaken before 2005. Ezzeddine told Al-Monitor that this has allowed them to effectively “ride the wave of the protests” and fashion themselves as an opposition party.

On June 9, the Kataeb and the Lebanese Forces continued their push for early parliamentary elections, long one of the core demands of the protest movement voiced by demonstrators.

Nevertheless, a local Lebanese Forces official Al-Monitor spoke with in the aftermath of the violent clashes downtown said that in his view, the core issue in Lebanon is not corruption, but Hezbollah’s dominance and possession of “illegal” weapons.

“This is a very important tool to keep that sort of sectarian fragmentation existing within communities,” Ezzeddine explained, “because Hezbollah’s weapons is viewed as the largest sectarian power tool to make people feel threatened or make them fear each other.”

In a system where sectarianism drives politics, division has historically been a source of strength for the country’s political elite. After the tensions in Ain el-Remmaneh on June 6, Kataeb parliamentarian Nadim Gemayel visited the area and was greeted with cheers from supporters.

Yet despite low-level clashes that may reinforce this fragmentation, there does not appear to be any willingness from the heads of the parties themselves for conflict to occur. Amal, Hezbollah, former Prime Minister Saad al-Hariri as well as Muslim religious leaders all disavowed the day’s incitement and violence.

But according to Mustafa Allouch, a member of the Future Movement’s political bureau, this may not be enough.

“What’s happening now, at least from the Sunni side, leadership is absent,” Allouch said of his party’s base. “At the same time we see poverty, loss of hope. All of this will lead to chaos. And when I say chaos, it’s chaos because it will be translated into atrocities in the street, looting, anarchy.”

Hindy agreed that as hunger grows with the continued drop in the value of the Lebanese pound, which reportedly hit record lows of more than 5,000 to the dollar on June 11, people on the ground may become less “controllable,” and violence will likely increase.

Nevertheless, widespread demonstrations that took place against the pound’s inflation on June 11, while occasionally violent, roundly rejected the partisanship seen only a few days before. In one video, motorcyclists rode through Ain el-Remmaneh chanting against sectarianism.

It remains uncertain how big a role partisan tensions will continue to play on the ground in Lebanon’s protests, or whether the collective suffering of the Lebanese people will serve as a unifying factor. Ultimately, however, it is clear that the country’s political blocs will try to adapt to whatever circumstances arise to preserve existing dynamics as much as possible.