Protests in Lebanon over new taxes continued despite the use of force by politicians' bodyguards. 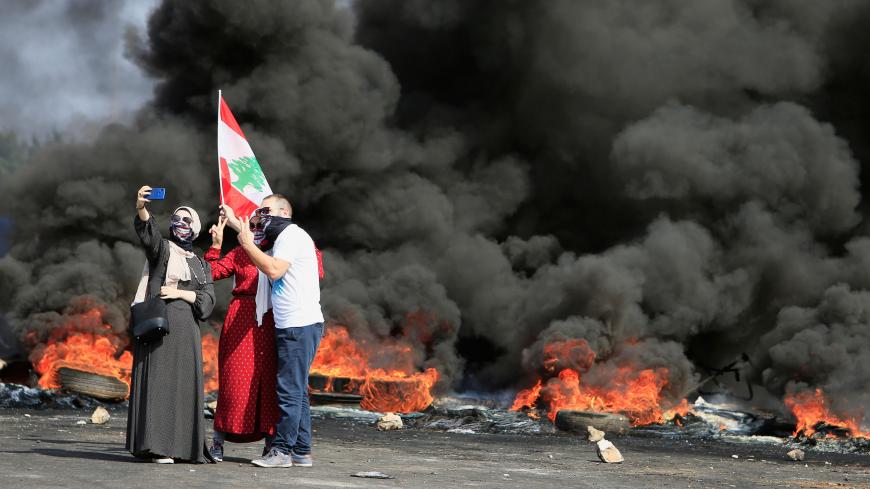 Demonstrators take a selfie in front of burning tires during a protest targeting the government over an economic crisis, at Barja area blocking off a main road leading from South Lebanon to Beirut, Oct. 18, 2019.

BEIRUT — Calls for revolution echoed throughout the night in Beirut Oct. 17, as thousands of protesters descended upon the city’s central district.

“Whoever is still at home, come down!” protester Samer Richa told Al-Monitor in front of the Grand Serail, the headquarters of Lebanon’s prime minister, where police and soldiers blocked the protesters’ path. “See what these people are doing, go ahead!”

Although the largest protest was in front of the Grand Serail, related demonstrations took place across Beirut, blocking major roads and highways and paralyzing the city. The night’s events were sparked by a tax of up to $6 a month on internet phone calls made via WhatsApp and other applications that had been approved the same day. News that Minister of Telecommunications Mohammed Choucair had revoked the tax did little to sap protesters’ energy.

Mohammad Ziahim, an unemployed civil engineer, told Al-Monitor that the withdrawal of the tax changed nothing for him.

“I hate this,” he said. “I want to do something even if I know that nothing will change.”

Although initially set off by a round of new taxes proposed as part of Lebanon’s 2020 budget, which included the WhatsApp tax, the protests were the result of deep economic and political grievances. So far, protesters appear to have bridged Lebanese sectarian and partisan divides, and are calling for nothing short of the resignation of the entire government, including Prime Minister Saad Hariri, parliamentary speaker Nabih Berri and President Michel Aoun amid the country’s worsening economy. During an address to the nation Oct. 18, Hariri gave himself and other leaders 72 hours to solve the crisis, but he did not resign as other politicians had urged him to.

The demonstrations have been marred by violence from multiple sides, with clashes between protesters and police, along with multiple instances of shooting from politicians’ bodyguards that have resulted in injuries in the northern city of Tripoli. Two people were also reportedly killed by fires in Beirut.

As the night of Oct. 17 wore on, protesters set fire to rubble throughout downtown Beirut, tearing down construction sites and street signs, and closing roads by overturning dumpsters. Protests and rioting continued the next day, and police and protesters came to blows much like they did in previous protests Sept. 29. But this time, live ammunition was fired by bodyguards of two politicians — first by Education Minister Akram Chehayeb’s personnel in Beirut on Oct. 17,  and then allegedly by former MP Misbah Ahdab’s bodyguards in Tripoli on Oct. 18. Ahdab however told Al-Monitor via WhatsApp that someone in the crowd of protestors fired first and shot a member of his entourage in the ear, provoking a response from his personnel. A video he sent Al-Monitor showed him being escorted through Nour Square in Tripoli before shots rang out. Multiple injuries were reported in Tripoli afterward, and the Lebanese Armed Forces reportedly arrested the responsible individuals without mentioning any deaths. Security forces used tear gas in the early hours of the morning and in the evening of Oct. 18 to disperse crowds, and although by midnight security forces in Beirut had forcibly cleared the protests, others reportedly continued in Tripoli and other cities. Reportedly, protestors returned to certain areas of downtown Beirut in the early hours of Oct. 19 as reports began circulating of brutality against civilians by security forces that evening.

While Lebanon’s Internal Security Forces reported more than 60 injuries among its corps during the first night of protests, the second day of demonstrations saw 52 injured. The number of protesters injured over the course of the two days remains unclear, but 70 were reportedly arrested according to the ISF. Two foreign workers died as a result of smoke from a fire near the demonstrations.

As in previous protests this month, the primary drivers of public anger were the poor state of the economy, joblessness, a lack of resources, new taxes and austerity measures, along with corruption at the highest levels of Lebanese politics. According to the World Bank, Lebanon’s economy may already be going through a recession, with the bank’s end-of-year estimates predicting that Lebanon’s real gross domestic product will shrink by 0.2% by the end of the year.

Ali Assir, a protester originally from South Lebanon, held his young son Hadi in his arms and complained about the widespread lack of drinking water, adequate electricity and employment opportunities in Lebanon.

“We’ve had enough of poverty, enough of being tired,” he told Al-Monitor in Beirut. “We can’t live.”

Standing amid burning rubble south of Beirut’s Martyrs’ Square in the early hours of the same morning, Zeinab Darwish, who lives in the city’s Hezbollah-dominated southern suburbs, went further.

“The days of the civil war were better,” she said, complaining about the state of health care access in Lebanon and how job opportunities now come exclusively through political cronyism.

A consistent theme of the protests was an apparent lack of sectarian divisions among protesters. Their chants and actions appeared to target all of the traditional leaders of Lebanon’s confessional communities. In Tripoli, known historically as a bastion of the Hariri’s Future Movement, protesters were seen tearing down images of the prime minister and his family. In majority-Shiite Nabatiyeh in South Lebanon, protesters were filmed removing photos of Hezbollah parliamentarian Mohammed Raad and yelling chants calling Berri, the head of the Hezbollah-allied Amal Movement, a thief.

He said that as imam, it was his "religious and human duty" to be here.

A number of politicians, like Foreign Minister Gebran Bassil, made speeches related to the protests. Progressive Socialist Party leader Walid Jumblatt and Lebanese Forces head Samir Geagea recommended that Hariri step down. Although rumors circulated that Hariri would indeed resign from his post, as per protesters’ demands, the prime minister instead presented in a speech the difficulties he had faced in facilitating reforms. He gave himself a 72-hour window to address the growing crisis, according to The Daily Star.

Former parliamentarian Mustafa Allouch, who represented Tripoli as part of the Future Movement from 2005 to 2009, told Al-Monitor that he had sent Hariri a message Oct. 18 advising him to be “transparent” on the situation in the country during his speech.

“Giving three days is a good choice,” Allouch said. “Because if not, it’s better for him not to stay in the government.”

He added that he still has confidence in Hariri, but is unsure what Hariri’s next steps will be if a solution is not reached by the end of the 72-hour deadline.

Despite Hariri’s promises, until more concessions are made to stem public anger, demonstrations are likely to grip Beirut and the rest of Lebanon in the near future, possibly even before Hariri's deadline.

“Update: Oct. 19, 2019. This article has been updated with a statement from former MP Misbah Ahdab ” 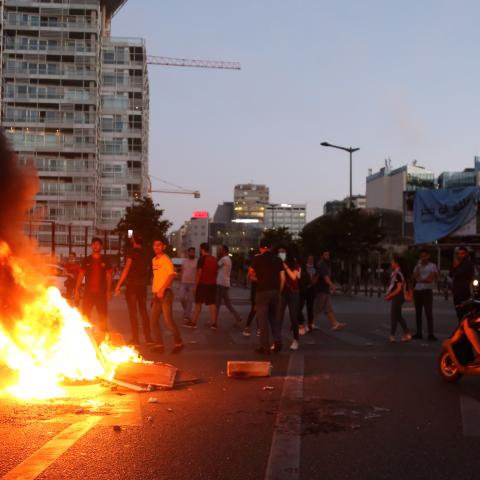